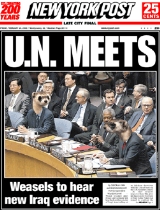 Encyclopedia
The phrase axis of weasels is a derogatory term for certain European states that did not support the United States, the United Kingdom and their allies in the 2003 invasion of Iraq
2003 invasion of Iraq
The 2003 invasion of Iraq , was the start of the conflict known as the Iraq War, or Operation Iraqi Freedom, in which a combined force of troops from the United States, the United Kingdom, Australia and Poland invaded Iraq and toppled the regime of Saddam Hussein in 21 days of major combat operations...
, specifically France
France
The French Republic , The French Republic , The French Republic , (commonly known as France , is a unitary semi-presidential republic in Western Europe with several overseas territories and islands located on other continents and in the Indian, Pacific, and Atlantic oceans. Metropolitan France...
, Germany
Germany
Germany , officially the Federal Republic of Germany , is a federal parliamentary republic in Europe. The country consists of 16 states while the capital and largest city is Berlin. Germany covers an area of 357,021 km2 and has a largely temperate seasonal climate...
and Belgium
Belgium
Belgium , officially the Kingdom of Belgium, is a federal state in Western Europe. It is a founding member of the European Union and hosts the EU's headquarters, and those of several other major international organisations such as NATO.Belgium is also a member of, or affiliated to, many...
.

The phrase is derived primarily from France's actions during United Nations
United Nations
The United Nations is an international organization whose stated aims are facilitating cooperation in international law, international security, economic development, social progress, human rights, and achievement of world peace...
debate on the threatened U.S. invasion of Iraq
Iraq
Iraq ; officially the Republic of Iraq is a country in Western Asia spanning most of the northwestern end of the Zagros mountain range, the eastern part of the Syrian Desert and the northern part of the Arabian Desert....
. In American slang, a weasel
Weasel
Weasels are mammals forming the genus Mustela of the Mustelidae family. They are small, active predators, long and slender with short legs....
is a person who acts duplicitously or hypocritically. France had expressed strong opposition in the United Nations to an invasion of Iraq and had threatened to veto a proposed resolution against Iraq if it were voted upon. Belgium and Germany joined with France and thus were included in the group.

The term is a conscious pun
Pun
The pun, also called paronomasia, is a form of word play which suggests two or more meanings, by exploiting multiple meanings of words, or of similar-sounding words, for an intended humorous or rhetorical effect. These ambiguities can arise from the intentional use and abuse of homophonic,...
made on President
President of the United States
The President of the United States of America is the head of state and head of government of the United States. The president leads the executive branch of the federal government and is the commander-in-chief of the United States Armed Forces....
George W. Bush
George W. Bush
George Walker Bush is an American politician who served as the 43rd President of the United States, from 2001 to 2009. Before that, he was the 46th Governor of Texas, having served from 1995 to 2000....
's term "axis of evil
Axis of evil
"Axis of evil" is a term initially used by the former United States President George W. Bush in his State of the Union Address on January 29, 2002 and often repeated throughout his presidency, describing governments that he accused of helping terrorism and seeking weapons of mass destruction...
", which he used in the 2002 State of the Union
State Of The Union
"State Of The Union" is the debut single from British singer-songwriter David Ford. It had previously been featured as a demo on his official website, before appearing as a track on a CD entitled "Apology Demos EP," only on sale at live shows....
address to decry Iraq
Iraq
Iraq ; officially the Republic of Iraq is a country in Western Asia spanning most of the northwestern end of the Zagros mountain range, the eastern part of the Syrian Desert and the northern part of the Arabian Desert....
, Iran
Iran
Iran , officially the Islamic Republic of Iran , is a country in Southern and Western Asia. The name "Iran" has been in use natively since the Sassanian era and came into use internationally in 1935, before which the country was known to the Western world as Persia...
, and North Korea
North Korea
The Democratic People’s Republic of Korea , , is a country in East Asia, occupying the northern half of the Korean Peninsula. Its capital and largest city is Pyongyang. The Korean Demilitarized Zone serves as the buffer zone between North Korea and South Korea...
. "Axis of evil", which was coined partly by Bush speechwriter David Frum
David Frum
David J. Frum is a Canadian American journalist active in both the United States and Canadian political arenas. A former economic speechwriter for President George W. Bush, he is also the author of the first "insider" book about the Bush presidency...
, became a contemporary meme
Meme
A meme is "an idea, behaviour or style that spreads from person to person within a culture."A meme acts as a unit for carrying cultural ideas, symbols or practices, which can be transmitted from one mind to another through writing, speech, gestures, rituals or other imitable phenomena...
and used in a wide variety of contexts. The word "axis" itself comes from the World War II
World War II
World War II, or the Second World War , was a global conflict lasting from 1939 to 1945, involving most of the world's nations—including all of the great powers—eventually forming two opposing military alliances: the Allies and the Axis...
term "axis powers
Axis Powers
The Axis powers , also known as the Axis alliance, Axis nations, Axis countries, or just the Axis, was an alignment of great powers during the mid-20th century that fought World War II against the Allies. It began in 1936 with treaties of friendship between Germany and Italy and between Germany and...
" — Germany
Nazi Germany
Nazi Germany , also known as the Third Reich , but officially called German Reich from 1933 to 1943 and Greater German Reich from 26 June 1943 onward, is the name commonly used to refer to the state of Germany from 1933 to 1945, when it was a totalitarian dictatorship ruled by...
, Italy, and Japan
Empire of Japan
The Empire of Japan is the name of the state of Japan that existed from the Meiji Restoration on 3 January 1868 to the enactment of the post-World War II Constitution of...
— a label Germany and Italy had originally given to themselves.

The phrase originated in a satirical item titled "Rumsfeld Sorry for 'Axis of Weasels' Remark" written by Scott Ott for ScrappleFace
ScrappleFace
ScrappleFace is a U.S. website run by Scott Ott that satirizes the news from a conservative perspective.The name ScrappleFace was coined by Ott's grandmother, Jessica McMaster , who cared for Ott and his brothers from the age of five...
, his satirical blog
Blog
A blog is a type of website or part of a website supposed to be updated with new content from time to time. Blogs are usually maintained by an individual with regular entries of commentary, descriptions of events, or other material such as graphics or video. Entries are commonly displayed in...
, on January 22, 2003. Two days later, the New York Post
New York Post
The New York Post is the 13th-oldest newspaper published in the United States and is generally acknowledged as the oldest to have been published continuously as a daily, although – as is the case with most other papers – its publication has been periodically interrupted by labor actions...
used it in the main headline: AXIS OF WEASEL - GERMANY AND FRANCE WIMP OUT ON IRAQ. Ott's satirical item was spread widely by email, misleading some readers into believing that US Secretary of Defense Donald Rumsfeld
Donald Rumsfeld
Donald Henry Rumsfeld is an American politician and businessman. Rumsfeld served as the 13th Secretary of Defense from 1975 to 1977 under President Gerald Ford, and as the 21st Secretary of Defense from 2001 to 2006 under President George W. Bush. He is both the youngest and the oldest person to...
had really referred to France and Germany as an "Axis of Weasels." Ott later used the phrase as the title for a book (ISBN 0-9761414-0-X).

The French media translated the phrase as "axe de faux jetons" (literally, an "axis of fake gambling chips", though its figurative meaning is "axis of devious characters").
The source of this article is wikipedia, the free encyclopedia.  The text of this article is licensed under the GFDL.