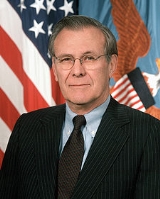 Born in Illinois, Rumsfeld attended Princeton University
Princeton University
Princeton University is a private research university located in Princeton, New Jersey, United States. The school is one of the eight universities of the Ivy League, and is one of the nine Colonial Colleges founded before the American Revolution....
, graduating in 1954 with a degree in political science
Political science
Political Science is a social science discipline concerned with the study of the state, government and politics. Aristotle defined it as the study of the state. It deals extensively with the theory and practice of politics, and the analysis of political systems and political behavior...
.

I am trying to find the text of a report given by Secretary of Defense Rumsfeld to Nato in Brussels. Date: December 10, 1976. Can anyone help? Keywor...
More

I don't believe anyone that I know in the administration ever said that Iraq had nuclear weapons.

At a hearing of the Senate's appropriations subcommittee on defense, May 14, 2003
More
x