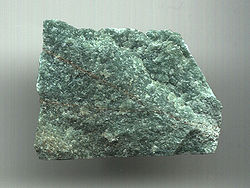 Aventurine is a form of quartz
Quartz
Quartz is the second-most-abundant mineral in the Earth's continental crust, after feldspar. It is made up of a continuous framework of SiO4 silicon–oxygen tetrahedra, with each oxygen being shared between two tetrahedra, giving an overall formula SiO2. There are many different varieties of quartz,...
, characterised by its translucency and the presence of platy mineral
Mineral
A mineral is a naturally occurring solid chemical substance formed through biogeochemical processes, having characteristic chemical composition, highly ordered atomic structure, and specific physical properties. By comparison, a rock is an aggregate of minerals and/or mineraloids and does not...
inclusion
Inclusion (mineral)
In mineralogy, an inclusion is any material that is trapped inside a mineral during its formation.In gemology, an inclusion is a characteristic enclosed within a gemstone, or reaching its surface from the interior....
s that give a shimmering or glistening effect termed aventurescence
Aventurescence
In gemology, aventurescence is an optical reflectance effect seen in certain gems. The effect amounts to a metallic glitter, arising from minute, preferentially oriented mineral platelets within the material. These platelets are so numerous that they also influence the material's body colour...
. 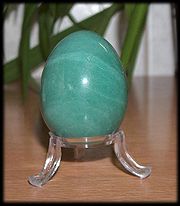 The most common colour of aventurine is green, but it may also be orange, brown, yellow, blue, or gray. Chrome-bearing fuchsite (a variety of muscovite
Muscovite
Muscovite is a phyllosilicate mineral of aluminium and potassium with formula KAl22, or 236. It has a highly-perfect basal cleavage yielding remarkably-thin laminæ which are often highly elastic...
mica
Mica
The mica group of sheet silicate minerals includes several closely related materials having highly perfect basal cleavage. All are monoclinic, with a tendency towards pseudohexagonal crystals, and are similar in chemical composition...
) is the classic inclusion, and gives a silvery green or blue sheen. Oranges and browns are attributed to hematite
Hematite
Hematite, also spelled as haematite, is the mineral form of iron oxide , one of several iron oxides. Hematite crystallizes in the rhombohedral system, and it has the same crystal structure as ilmenite and corundum...
or goethite
Goethite
Goethite , named after the German polymath Johann Wolfgang von Goethe, is an iron bearing oxide mineral found in soil and other low-temperature environments. Goethite has been well known since prehistoric times for its use as a pigment. Evidence has been found of its use in paint pigment samples...
. Because aventurine is a rock
Rock (geology)
In geology, rock or stone is a naturally occurring solid aggregate of minerals and/or mineraloids.The Earth's outer solid layer, the lithosphere, is made of rock. In general rocks are of three types, namely, igneous, sedimentary, and metamorphic...
, its physical properties vary: its specific gravity
Specific gravity
Specific gravity is the ratio of the density of a substance to the density of a reference substance. Apparent specific gravity is the ratio of the weight of a volume of the substance to the weight of an equal volume of the reference substance. The reference substance is nearly always water for...
may lie between 2.64-2.69 and its hardness is somewhat lower than single-crystal quartz
Quartz
Quartz is the second-most-abundant mineral in the Earth's continental crust, after feldspar. It is made up of a continuous framework of SiO4 silicon–oxygen tetrahedra, with each oxygen being shared between two tetrahedra, giving an overall formula SiO2. There are many different varieties of quartz,...
at around 6.5.

Aventurine feldspar or sunstone
Sunstone
Sunstone is a plagioclase feldspar, which when viewed from certain directions exhibits a brilliant spangled appearance; this has led to its use as a gemstone. It has been found in Southern Norway, and in some United States localities...
can be confused with orange and red aventurine quartzite, although the former is generally of a higher transparency. Aventurine is often banded and an overabundance of fuchsite may render it opaque, in which case it may be mistaken for malachite
Malachite
Malachite is a copper carbonate mineral, with the formula Cu2CO32. This green-colored mineral crystallizes in the monoclinic crystal system, and most often forms botryoidal, fibrous, or stalagmitic masses. Individual crystals are rare but do occur as slender to acicular prisms...
at first glance.

The name aventurine derives from the Italian
Italian language
Italian is a Romance language spoken mainly in Europe: Italy, Switzerland, San Marino, Vatican City, by minorities in Malta, Monaco, Croatia, Slovenia, France, Libya, Eritrea, and Somalia, and by immigrant communities in the Americas and Australia...
"a ventura" meaning "by chance". This is an allusion to the lucky discovery of aventurine glass or goldstone
Goldstone (gemstone)
Goldstone is a type of glittering glass made in a low-oxygen reducing atmosphere. The finished product can take a smooth polish and be carved into beads, figurines, or other artifacts suitable for semiprecious stone, and in fact goldstone is often mistaken for or misrepresented as a natural...
at some point in the 18th century. Although it was known first, goldstone is now a common imitation of aventurine and sunstone. Goldstone is distinguished visually from the latter two minerals by its coarse flecks of copper
Copper
Copper is a chemical element with the symbol Cu and atomic number 29. It is a ductile metal with very high thermal and electrical conductivity. Pure copper is soft and malleable; an exposed surface has a reddish-orange tarnish...
, dispersed within the glass in an unnaturally uniform manner. It is usually a golden brown, but may also be found in blue or green.

The majority of green and blue-green aventurine originates in India
India
India , officially the Republic of India , is a country in South Asia. It is the seventh-largest country by geographical area, the second-most populous country with over 1.2 billion people, and the most populous democracy in the world...
(particularly in the vicinity of Mysore and Madras
Chennai
Chennai , formerly known as Madras or Madarasapatinam , is the capital city of the Indian state of Tamil Nadu, located on the Coromandel Coast off the Bay of Bengal. Chennai is the fourth most populous metropolitan area and the sixth most populous city in India...
) where it is employed by prolific artisans. Creamy white, gray and orange material is found in Chile
Chile
Chile ,officially the Republic of Chile , is a country in South America occupying a long, narrow coastal strip between the Andes mountains to the east and the Pacific Ocean to the west. It borders Peru to the north, Bolivia to the northeast, Argentina to the east, and the Drake Passage in the far...
, Spain
Spain
Spain , officially the Kingdom of Spain languages]] under the European Charter for Regional or Minority Languages. In each of these, Spain's official name is as follows:;;;;;;), is a country and member state of the European Union located in southwestern Europe on the Iberian Peninsula...
and Russia
Russia
Russia or , officially known as both Russia and the Russian Federation , is a country in northern Eurasia. It is a federal semi-presidential republic, comprising 83 federal subjects...
. Most material is carved into beads and figurines with only the finer examples fashioned into cabochon
Cabochon
A cabochon , from the Middle French caboche , is a gemstone which has been shaped and polished as opposed to faceted. The resulting form is usually a convex top with a flat bottom. Cutting en cabochon is usually applied to opaque gems, while faceting is usually applied to transparent stones...
s, later being set into jewellery
Jewellery
Jewellery or jewelry is a form of personal adornment, such as brooches, rings, necklaces, earrings, and bracelets.With some exceptions, such as medical alert bracelets or military dog tags, jewellery normally differs from other items of personal adornment in that it has no other purpose than to...
.