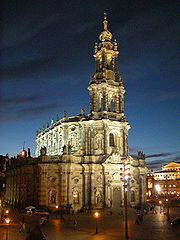 The Katholische Hofkirche is a Roman Catholic
Roman Catholic Church
The Catholic Church, also known as the Roman Catholic Church, is the world's largest Christian church, with over a billion members. Led by the Pope, it defines its mission as spreading the gospel of Jesus Christ, administering the sacraments and exercising charity...
Cathedral
Cathedral
A cathedral is a Christian church that contains the seat of a bishop...
, located in the 'Altstadt
Altstadt
Altstadt is the German language word for "old town", meaning "historical city centre within the city wall", in contrast to a Neustadt built outside later....
' in the heart of Dresden
Dresden
Dresden is the capital city of the Free State of Saxony in Germany. It is situated in a valley on the River Elbe, near the Czech border. The Dresden conurbation is part of the Saxon Triangle metropolitan area....
, in Germany
Germany
Germany , officially the Federal Republic of Germany , is a federal parliamentary republic in Europe. The country consists of 16 states while the capital and largest city is Berlin. Germany covers an area of 357,021 km2 and has a largely temperate seasonal climate...
. Previously the most important Catholic parish church of the city, it was elevated to cathedral of the Roman Catholic Diocese of Dresden-Meissen
Roman Catholic Diocese of Dresden-Meissen
The Diocese of Dresden-Meissen is a Diocese of Catholic Church in Germany. Founded as the Bishopric of Meissen in 968, it was dissolved in 1539 during the Protestant Reformation. The diocese was reestablished in 1921 and renamed Dresden-Meissen in 1980. The seat of the diocese is in Dresden and...
in 1964.

The Hofkirche stands as one of Dresden's foremost landmarks. It was built by architect
Architect
An architect is a person trained in the planning, design and oversight of the construction of buildings. To practice architecture means to offer or render services in connection with the design and construction of a building, or group of buildings and the space within the site surrounding the...
Gaetano Chiaveri
Gaetano Chiaveri
Gaetano Chiaveri was an Italian Baroque architect and master builder, most notable for his work as part of the second phase of the Dresden Baroque. His works include the Katholische Hofkirche in Dresden and a new wing of the Royal Castle in Warsaw, whilst he also oversaw the construction of the...
from 1738 to 1751.

The church was commissioned by Frederick Augustus II, Elector of Saxony and King of Poland
Augustus III of Poland
Augustus III, known as the Saxon ; ; also Prince-elector Friedrich August II was the Elector of Saxony in 1733-1763, as Frederick Augustus II , King of Poland and Grand Duke of Lithuania in 1734-1763.-Biography:Augustus was the only legitimate son of Augustus II the Strong, Imperial Prince-Elector...
. In the crypt the heart of King August the Strong is buried along with the last King of Saxony and the remains of 49 other members of the Wettin
Wettin (dynasty)
The House of Wettin is a dynasty of German counts, dukes, prince-electors and kings that once ruled the area of today's German states of Saxony, the Saxon part of Saxony-Anhalt, and Thuringia for more than 800 years...
family as well as people who married into the family, such as Princess Maria Carolina of Savoy
Princess Maria Carolina of Savoy
Maria Carolina of Savoy was a Princess of Savoy from her birth. She was the youngest daughter of the future Victor Amadeus III of Sardinia and married in 1781 to the Electoral Prince of Saxony...
, wife of Anthony of Saxony.

The church was badly damaged during World War II
World War II
World War II, or the Second World War , was a global conflict lasting from 1939 to 1945, involving most of the world's nations—including all of the great powers—eventually forming two opposing military alliances: the Allies and the Axis...
and was restored during the mid-1980s under the East German regime. Today it is the cathedral
Cathedral
A cathedral is a Christian church that contains the seat of a bishop...
of the diocese. It has Silbermann's
Gottfried Silbermann
Gottfried Silbermann was an influential German constructor of keyboard instruments. He built harpsichords, clavichords, organs, and fortepianos; his modern reputation rests mainly on the latter two.-Life:...
last and biggest organ.
The source of this article is wikipedia, the free encyclopedia.  The text of this article is licensed under the GFDL.