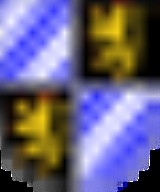 Encyclopedia
The Archbishopric of Trier was a Roman Catholic diocese
Diocese
A diocese is the district or see under the supervision of a bishop. It is divided into parishes.An archdiocese is more significant than a diocese. An archdiocese is presided over by an archbishop whose see may have or had importance due to size or historical significance...
in Germany
Germany
Germany , officially the Federal Republic of Germany , is a federal parliamentary republic in Europe. The country consists of 16 states while the capital and largest city is Berlin. Germany covers an area of 357,021 km2 and has a largely temperate seasonal climate...
, that existed from Carolingian times until the end of the Holy Roman Empire
Holy Roman Empire
The Holy Roman Empire was a realm that existed from 962 to 1806 in Central Europe.It was ruled by the Holy Roman Emperor. Its character changed during the Middle Ages and the Early Modern period, when the power of the emperor gradually weakened in favour of the princes...
. Its suffragans were the dioceses of Metz
Diocese of Metz
The Roman Catholic Diocese of Metz is a Diocese of the Latin Rite of the Roman Catholic church in France. In the Middle Ages it was in effect an independent state, part of the Holy Roman Empire, ruled by the bishop who had the ex officio title of count. It was annexed to France by King Henry II in...
, Toul
Diocese of Toul
The Diocese of Toul was a Roman Catholic diocese seated at Toul in present-day France. It existed from 365 until 1824. From 1048 until 1552 , it was also a state of the Holy Roman Empire.- History :...
and Verdun. Since the 9th century the Archbishops of Trier were simultaneously princes and since the 11th century prince electors of the empire. Their temporal territories were known as the Electorate of Trier ( or Kurtrier).

Trier
Trier
Trier, historically called in English Treves is a city in Germany on the banks of the Moselle. It is the oldest city in Germany, founded in or before 16 BC....
, as the important Roman provincial capital of Augusta Treverorum, had been the seat of a bishop since Roman times. It was raised to archiepiscopal status during the reign of Charlemagne
Charlemagne
Charlemagne was King of the Franks from 768 and Emperor of the Romans from 800 to his death in 814. He expanded the Frankish kingdom into an empire that incorporated much of Western and Central Europe. During his reign, he conquered Italy and was crowned by Pope Leo III on 25 December 800...
.

The bishops of Trier were already virtually independent territorial magnates in Merovingian times. In 772 Charlemagne granted Bishop Wiomad complete immunity from the jurisdiction of the ruling count
Count
A count or countess is an aristocratic nobleman in European countries. The word count came into English from the French comte, itself from Latin comes—in its accusative comitem—meaning "companion", and later "companion of the emperor, delegate of the emperor". The adjective form of the word is...
for all the churches and monasteries, as well as villages and castles that belonged to the Church of St. Peter at Trier. In 816 Louis the Pious
Louis the Pious
Louis the Pious , also called the Fair, and the Debonaire, was the King of Aquitaine from 781. He was also King of the Franks and co-Emperor with his father, Charlemagne, from 813...
confirmed to Archbishop Hetto the privileges of protection and immunity granted by his father.

At the partition of the Carolingian empire
Carolingian Empire
Carolingian Empire is a historiographical term which has been used to refer to the realm of the Franks under the Carolingian dynasty in the Early Middle Ages. This dynasty is seen as the founders of France and Germany, and its beginning date is based on the crowning of Charlemagne, or Charles the...
at Verdun
Verdun
Verdun is a city in the Meuse department in Lorraine in north-eastern France. It is a sub-prefecture of the department.Verdun is the biggest city in Meuse, although the capital of the department is the slightly smaller city of Bar-le-Duc.- History :...
in 843, Trier fell to Lothair; at the partition of Lotharingia
Lotharingia
Lotharingia was a region in northwest Europe, comprising the Low Countries, the western Rhineland, the lands today on the border between France and Germany, and what is now western Switzerland. It was born of the tripartite division in 855, of the kingdom of Middle Francia, itself formed of the...
at Meersen in 870, it fell to the East Frankish kingdom, which developed into Germany. Archbishop Radbod received in 898 complete immunity from all taxes for the entire episcopal territory, granted by Zwentibold
Zwentibold
Zwentibold was the illegitimate son of the Carolingian Emperor Arnulf of Carinthia. In 895 his father, then king of East Francia, granted him the Kingdom of Lotharingia, which he ruled until his death.After his death he was declared a saint and martyr by the Catholic Church.- Life :Zwentibold...
, the natural son of Emperor Arnulf of Carinthia
Arnulf of Carinthia
Arnulf of Carinthia was the Carolingian King of East Francia from 887, the disputed King of Italy from 894 and the disputed Holy Roman Emperor from February 22, 896 until his death.-Birth and Illegitimacy:...
, who reigned briefly as King of Lotharingia and, under great pressure from his independent nobles, desperately needed a powerful ally. The gift cemented the position of the archbishops as territorial lords in their own right. Following Zwentibold's assassination in 900, the handlers of the child-king Louis
Louis the Child
Louis the Child , sometimes called Louis IV or Louis III, was the last Carolingian ruler of East Francia....
courted Radbold in their turn, granting him the district and city of Trier outright, and the right to have a mint — as much a symbol of independent authority as an economic tool — and to impose customs-duties. From the court of Charles the Simple
Charles the Simple
Charles III , called the Simple or the Straightforward , was the undisputed King of France from 898 until 922 and the King of Lotharingia from 911 until 919/23...
he obtained the final right, that of election of the Bishop of Trier by the chapter, free of Imperial interference.

The last archbishop-elector removed to Koblenz
Koblenz
Koblenz is a German city situated on both banks of the Rhine at its confluence with the Moselle, where the Deutsches Eck and its monument are situated.As Koblenz was one of the military posts established by Drusus about 8 BC, the...
in 1786. From 1795, the territories of the Archbishopric on the left bank of the Rhine — which is to say almost all of them — were under French occupation, and were annexed in 1801 and a separate bishopric established (later assuming control of the whole diocese in 1803). In 1803, what was left of the Archbishopric was secularized and annexed by the Princes of Nassau.