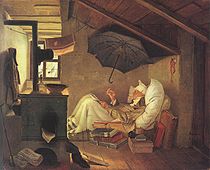 An attic is a space found directly below the pitched roof
Roof
A roof is the covering on the uppermost part of a building. A roof protects the building and its contents from the effects of weather. Structures that require roofs range from a letter box to a cathedral or stadium, dwellings being the most numerous....
of a house or other building (also called garret, loft
Loft
A loft can be an upper story or attic in a building, directly under the roof. Alternatively, a loft apartment refers to large adaptable open space, often converted for residential use from some other use, often light industrial...
or sky parlor). Attic is generally the American/Canadian reference to it. As attics fill the space between the ceiling of the top floor of a building and the slanted roof, they are known for being awkwardly shaped spaces with exposed rafter
Rafter
A rafter is one of a series of sloped structural members , that extend from the ridge or hip to the downslope perimeter or eave, designed to support the roof deck and its associated loads.-Design:...
s and difficult-to-access corners. While some attics are converted
Loft conversion
A loft conversion is the process of transforming an empty attic space into a functional room, typically used as either living accommodation or storage space. Loft conversions are one of the most popular forms of home improvement in the UK as a result of their numerous perceived benefits...
into bedroom
Bedroom
A bedroom is a private room where people usually sleep for the night or relax during the day.About one third of our lives are spent sleeping and most of the time we are asleep, we are sleeping in a bedroom. To be considered a bedroom the room needs to have bed. Bedrooms can range from really simple...
s or home offices
Office
An office is generally a room or other area in which people work, but may also denote a position within an organization with specific duties attached to it ; the latter is in fact an earlier usage, office as place originally referring to the location of one's duty. When used as an adjective, the...
, complete with window
Window
A window is a transparent or translucent opening in a wall or door that allows the passage of light and, if not closed or sealed, air and sound. Windows are usually glazed or covered in some other transparent or translucent material like float glass. Windows are held in place by frames, which...
s and staircases, most attics remain hard to get to and neglected, and are typically used for storage. It is a word ultimately derived from the Attica
Attica
Attica is a historical region of Greece, containing Athens, the current capital of Greece. The historical region is centered on the Attic peninsula, which projects into the Aegean Sea...
region around Athens, Greece.

Attics can also help control temperature in a house by providing a large mass of unmoving air. Hot air rising from lower floors of a building often gets trapped in the attic, further compounding their reputation as inhospitable environments. However, in recent years many attics have been insulated to help decrease heating costs since on average, uninsulated attics account for 15% of the total energy loss in a typical house.

In some places "attic" is used more specifically to apply to lofts which have boarded floors and ceilings, and usually windows or skylights, and then "loft" is kept to mean a dark, unboarded roof-space which lacks these features.
The source of this article is wikipedia, the free encyclopedia.  The text of this article is licensed under the GFDL.