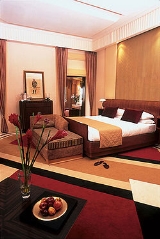 Encyclopedia
A bedroom is a private room
Room
A room is any distinguishable space within a structure.Room may also refer to:* Room , by Emma Donoghue* Room, Nepal* Room for PlayStation Portable, a social networking service* Thomas Gerald Room , Australian mathematician...
where people usually sleep for the night or relax during the day.
About one third of our lives are spent sleeping and most of the time we are asleep, we are sleeping in a bedroom. To be considered a bedroom the room needs to have bed. Bedrooms can range from really simple to fairly complex. Other standard furnishings a typical bedroom usually has are, a closet, nightstand, desk, and dresser. Today in richer countries that have houses with multiple bedrooms, a bathroom may be connected to the bedroom. This did not start happening until the mid to late twentieth century.

Furniture and other items in bedrooms vary greatly, depending on taste and local tradition. For instance, a master bedroom may include a bed of a specific size (double, king or queen-sized); one or more dresser
Chest of drawers
A chest of drawers, also called a dresser or a bureau, is a piece of furniture that has multiple parallel, horizontal drawers stacked one above another...
s (or perhaps, a wardrobe armoire
Wardrobe
A Wardrobe is a cabinet used for storing clothes.Wardrobe may also refer to:* Wardrobe , a full set of multiple clothing items* Wardrobe , part of royal administration in medieval England...
); a nightstand
Nightstand
A nightstand, alternatively night table or bedside table, is a small table or cabinet designed to stand beside a bed or elsewhere in a bedroom. It serves the role of a coffee table during nighttime hours, at a persons bedside....
; one or more closet
Closet
A closet is a small and enclosed space, a cabinet, or a cupboard in a house or building used for general storage or hanging clothes. A closet for food storage is usually referred to as a pantry...
s; and carpet
Carpet
A carpet is a textile floor covering consisting of an upper layer of "pile" attached to a backing. The pile is generally either made from wool or a manmade fibre such as polypropylene,nylon or polyester and usually consists of twisted tufts which are often heat-treated to maintain their...
ing. Built-in closets are less common in Europe than in North America; thus there is greater use of freestanding wardrobes or armoires in Europe.

An individual’s bedroom is a reflection of one’s personality, as well as social class, and is unique to each person. However there are certain items that are common in most bedrooms.
Mattresses and closets are the necessities in a bedroom. Mattresses usually have a bed set to raise the mattress off the ground and it provides some decoration. There are many different types of mattresses, in the 14th century the lower class slept on mattresses that were stuffed with straw. During the 16th century mattresses stuffed with feathers started to gain popularity, with those who could afford them. The common person was doing good if he could buy a mattress after 7 years of marriage. . In the 18th century cotton and wool started to become more common. The first coil spring mattress wasn’t invented until 1871. . Today more expensive mattresses, such as the Sleep Number bed and the Tempurpedic, are becoming more popular for those who can afford them. The Tempurpedic is recommended by medical professionals worldwide. The Sleep Number bed has become a popular mattress because it allows the individual to adjust the softness or firmness of their mattress to their liking. With advances in technology the prices also have gone up, a Tempurpedic mattress can cost $1,000 to $4,400 and a Sleep Number bed costs anywhere from $900 to $3,700. The most common and most purchased mattress is the innerspring mattress. The variety of choices range from relatively soft to a rather firm mattress. An inner spring mattress can cost from $199 to $1290. A bedroom may have bunk beds if more than one person share a room.
Night stands are also rather popular. They are used to put various items on, such as an alarm clock or a small lamp.
Having a television in a bedroom is fairly common as well. 43% of children from ages 3 to 4 have a television in their bedrooms. Along with televisions many bedrooms also have computers, video game consoles, which are more popular among teenagers, and a desk to do work. In the late 20th century and early 21st century the bedroom became a more social environment and people started to spend a lot more time in their bedroom than in the past.

Bedding
Bedding
Bedding refers to the materials laid above the mattress of a bed for hygiene, warmth, to protect the mattress, and for decorative effect. Bedding is the removable and washable portion of a human sleeping environment. It is more easily and economically replaced than the bed itself...
used in northern Europe (especially in Scandinavia
Scandinavia
Scandinavia is a cultural, historical and ethno-linguistic region in northern Europe that includes the three kingdoms of Denmark, Norway and Sweden, characterized by their common ethno-cultural heritage and language. Modern Norway and Sweden proper are situated on the Scandinavian Peninsula,...
) is significantly different from that used in North America and other parts of Europe. In Japan futon
Futon
Futon is an English word derived from Japanese , a term generally referring to the traditional style of Japanese bedding consisting of padded mattresses and quilts pliable enough to be folded and stored away during the day, allowing the room to serve for purposes other than as a bedroom...
s are common.

In addition to a bed (or, if shared by two or more children, a bunk bed
Bunk bed
A bunk bed is a type of bed in which one bed frame is stacked on top of another. The nature of bunk beds allows two people to sleep in the same room while maximizing available floor space...
), a child's bedroom may include a small closet or dressers, a toy box or computer game console, bookcase
Bookcase
A bookcase, or bookshelf, is a piece of furniture, almost always with horizontal shelves, used to store books. A bookcase consists of a unit including two or more shelves which may not all be used to contain books or other printed materials. Shelves may be fixed or adjustable to different positions...
or other items.

Many houses in America have at least two bedrooms—usually a master bedroom and one or more bedrooms for either the children or guests.

In some jurisdictions there are basic features (such as a closet and a "means of egress") that a room must have in order to legally qualify as a bedroom. In many states, such as Alaska, bedrooms are not required to have closets and must instead meet minimum size requirements.

Closets are a necessity in a bedroom. A closet by definition is a small space used to store things. In a bedroom, a closet is most commonly used for clothes and other small personal items that one may have. Walk in closets are more popular today and vary in size. However, in the past wardrobes have been the most prominent. A wardrobe is a tall rectangular shaped cabinet that clothes can be stored or hung in. Clothes are also kept in a dresser. Typically nicer clothes are kept in the closet because they can be hung up while leisure clothing and undergarments are stored in the dresser.

In buildings with multiple self-contained housing units (e.g., apartment
Apartment
An apartment or flat is a self-contained housing unit that occupies only part of a building...
s), the number of bedrooms varies widely. While many such units have at least one bedroom—frequently, these units have at least two—some of these units may not have a specific room dedicated for use as a bedroom. (These units may be known by various names, including studio, efficiency, bedsit, and others.)

Sometimes, a master bedroom is connected to a dedicated bathroom
Bathroom
A bathroom is a room for bathing in containing a bathtub and/or a shower and optionally a toilet, a sink/hand basin/wash basin and possibly also a bidet....
, often called an ensuite.