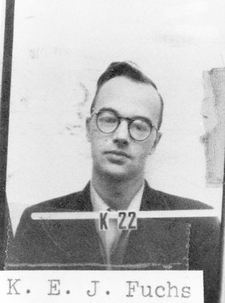 Atomic Spies and Atom Spies are terms that refer to various people in the United States
United States
The United States of America is a federal constitutional republic comprising fifty states and a federal district...
, Great Britain
Great Britain
Great Britain or Britain is an island situated to the northwest of Continental Europe. It is the ninth largest island in the world, and the largest European island, as well as the largest of the British Isles...
, and Canada
Canada
Canada is a North American country consisting of ten provinces and three territories. Located in the northern part of the continent, it extends from the Atlantic Ocean in the east to the Pacific Ocean in the west, and northward into the Arctic Ocean...
who are thought to have illicitly given information
Espionage
Espionage or spying involves an individual obtaining information that is considered secret or confidential without the permission of the holder of the information. Espionage is inherently clandestine, lest the legitimate holder of the information change plans or take other countermeasures once it...
about nuclear weapon
Nuclear weapon
A nuclear weapon is an explosive device that derives its destructive force from nuclear reactions, either fission or a combination of fission and fusion. Both reactions release vast quantities of energy from relatively small amounts of matter. The first fission bomb test released the same amount...
s production or design to the Soviet Union
Soviet Union
The Soviet Union , officially the Union of Soviet Socialist Republics , was a constitutionally socialist state that existed in Eurasia between 1922 and 1991....
during World War II
World War II
World War II, or the Second World War , was a global conflict lasting from 1939 to 1945, involving most of the world's nations—including all of the great powers—eventually forming two opposing military alliances: the Allies and the Axis...
and the early Cold War
Cold War
The Cold War was the continuing state from roughly 1946 to 1991 of political conflict, military tension, proxy wars, and economic competition between the Communist World—primarily the Soviet Union and its satellite states and allies—and the powers of the Western world, primarily the United States...
. Exactly what was given, and whether everyone on the list gave it, is still a matter of some scholarly dispute, and in some cases what were originally seen as strong testimonies or confessions were admitted as fabricated in later years. Their work constitutes the most publicly well-known and well-documented case of nuclear espionage
Nuclear espionage
Nuclear espionage is the purposeful giving of state secrets regarding nuclear weapons to other states without authorization . During the history of nuclear weapons there have been many cases of known nuclear espionage, and also many cases of suspected or alleged espionage...
in the history of nuclear weapons
History of nuclear weapons
The history of nuclear weapons chronicles the development of nuclear weapons. Nuclear weapons possess enormous destructive potential derived from nuclear fission or nuclear fusion reactions...
. There was a movement among nuclear scientists to share the information with the world scientific community, but that was firmly quashed by the American government.

The modern day sharing of nuclear technology with Iran, Libya, North Korea and possibly other regimes on the part of Abdul Qadeer Khan
Abdul Qadeer Khan
Abdul Qadeer Khan , also known in Pakistan as Mohsin-e-Pakistan , D.Eng, Sc.D, HI, NI , FPAS; more widely known as Dr. A. Q...
has yet to be fully explored. It is an open question whether the term "atom spy" will be applied to those operating outside the Cold War period, such as Khan and Argentine-American physicist Leonardo Mascheroni
Leonardo Mascheroni
Pedro Leonardo Mascheroni is a physicist who, according to the United States government, attempted to sell nuclear secrets to a Federal Bureau of Investigation agent posing as a Venezuelan spy. "U.S...
.

Whether the information significantly aided the speed of the Soviet atomic bomb project
Soviet atomic bomb project
The Soviet project to develop an atomic bomb , was a clandestine research and development program began during and post-World War II, in the wake of the Soviet Union's discovery of the United States' nuclear project...
is also disputed. While some of the information given could have aided in developing a nuclear weapon, the manner in which the heads of the Soviet bomb project actually used the information has led scholars to doubt its role in increasing the speed of development. According to this account, Igor Kurchatov
Igor Kurchatov
Igor Vasilyevich Kurchatov , was a Soviet nuclear physicist who is widely known as the director of the Soviet atomic bomb project. Along with Georgy Flyorov and Andrei Sakharov, Kurchatov is widely remembered and dubbed as the "father of the Soviet atomic bomb" for his directorial role in the...
and Lavrenty Beria used the information primarily as a "check" against their own scientists' work and did not liberally share the information with them, distrusting both their own scientists as well as the espionage information. Later scholarship has also shown that the decisive brake on early Soviet development was not problems in weapons design but, as in the Manhattan Project
Manhattan Project
The Manhattan Project was a research and development program, led by the United States with participation from the United Kingdom and Canada, that produced the first atomic bomb during World War II. From 1942 to 1946, the project was under the direction of Major General Leslie Groves of the US Army...
, the difficulty in procuring fissile materials, especially since the Soviet Union had no uranium
Uranium
Uranium is a silvery-white metallic chemical element in the actinide series of the periodic table, with atomic number 92. It is assigned the chemical symbol U. A uranium atom has 92 protons and 92 electrons, of which 6 are valence electrons...
deposits known when it began its program (unlike the United States).

Confirmation about espionage work came from the VENONA project, which intercepted and decrypted Soviet intelligence reports sent during and after World War II
World War II
World War II, or the Second World War , was a global conflict lasting from 1939 to 1945, involving most of the world's nations—including all of the great powers—eventually forming two opposing military alliances: the Allies and the Axis...
. These provided clues to the identity of several spies at Los Alamos and elsewhere, some of whom have never been identified. Some of this information was available, but not usable in court for secrecy reasons, during the trials of the 1950s. As well records from Soviet archives, which were briefly opened to researchers after the fall of the Soviet Union, included more information about some spies. 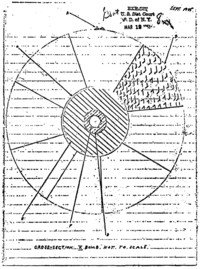