Encyclopedia
Astigmatism is an optical defect in which vision is blurred due to the inability of the optics of the eye to focus a point object into a sharp focused image on the retina. This may be due to an irregular or toric curvature of the cornea
Cornea
The cornea is the transparent front part of the eye that covers the iris, pupil, and anterior chamber. Together with the lens, the cornea refracts light, with the cornea accounting for approximately two-thirds of the eye's total optical power. In humans, the refractive power of the cornea is...
or lens
Lens (anatomy)
The crystalline lens is a transparent, biconvex structure in the eye that, along with the cornea, helps to refract light to be focused on the retina. The lens, by changing shape, functions to change the focal distance of the eye so that it can focus on objects at various distances, thus allowing a...
. There are two types of astigmatism: regular and irregular. Irregular astigmatism is often caused by a corneal scar or scattering in the crystalline lens and cannot be corrected by standard spectacle lenses, but can be corrected by contact lenses. Regular astigmatism arising from either the cornea or crystalline lens can be corrected by a toric lens
Toric lens
A toric lens is a lens with two different powers in two orientations perpendicular to each other. One of the lens surfaces is shaped like a "cap" from a torus , while the other one usually is spherical...
. A toric surface resembles a section of the surface of an American football or a doughnut
Doughnut
A doughnut or donut is a fried dough food and is popular in many countries and prepared in various forms as a sweet snack that can be homemade or purchased in bakeries, supermarkets, food stalls, and franchised specialty outlets...
where there are two regular radii, one smaller than the other one. This optical shape gives rise to regular astigmatism in the eye.

The refractive error
Refractive error
A refractive error, or refraction error, is an error in the focusing of light by the eye and a frequent reason for reduced visual acuity.-Classification:...
of the astigmatic eye
Human eye
The human eye is an organ which reacts to light for several purposes. As a conscious sense organ, the eye allows vision. Rod and cone cells in the retina allow conscious light perception and vision including color differentiation and the perception of depth...
stems from a difference in degree of curvature refraction
Refraction
Refraction is the change in direction of a wave due to a change in its speed. It is essentially a surface phenomenon . The phenomenon is mainly in governance to the law of conservation of energy. The proper explanation would be that due to change of medium, the phase velocity of the wave is changed...
of the two different meridians (i.e., the eye has different focal points in different planes.) For example, the image may be clearly focused on the retina
Retina
The vertebrate retina is a light-sensitive tissue lining the inner surface of the eye. The optics of the eye create an image of the visual world on the retina, which serves much the same function as the film in a camera. Light striking the retina initiates a cascade of chemical and electrical...
in the horizontal (sagittal) plane, but not in the vertical (tangential) plane. Astigmatism causes difficulties in seeing fine detail, and in some cases vertical lines (e.g., walls) may appear to the patient to be tilted. The astigmatic optics of the human eye can often be corrected by spectacles, hard contact lenses or contact lenses that have a compensating optic, cylindrical lens
Cylindrical lens
A cylindrical lens is a lens which focuses light which passes through on to a line instead of on to a point, as a spherical lens would. The curved face or faces of a cylindrical lens are sections of a cylinder, and focus the image passing through it onto a line parallel to the intersection of the...
(i.e. a lens that has different radii of curvature in different planes), or refractive surgery
Refractive surgery
Refractive eye surgery is any eye surgery used to improve the refractive state of the eye and decrease or eliminate dependency on glasses or contact lenses. This can include various methods of surgical remodeling of the cornea or cataract surgery. The most common methods today use excimer lasers to...
.


Based on axis of the principal meridians 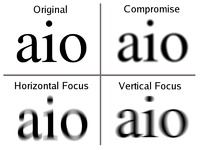 Axis is always recorded as an angle in degrees, between 0 and 180 degrees in a counter-clockwise direction. 0 and 180 lie on a horizontal line at the level of the centre of the pupil, and as seen by an observer, 0 lies on the right of both eyes.


Based on focus of the principal meridians

According to an American study published in Archives of Ophthalmology, nearly 3 in 10 children (28.4%) between the ages of 5 and 17 have astigmatism. A recent Brazilian study found that 34% of the students in one city were astigmatic. Regarding the prevalence in adults, a recent study in Bangladesh found that nearly 1 in 3 (32.4%) of those over the age of 30 had astigmatism.

A recent Polish study revealed that "with-the-rule astigmatism" may lead to the onset of myopia
Myopia
Myopia , "shortsightedness" ) is a refractive defect of the eye in which collimated light produces image focus in front of the retina under conditions of accommodation. In simpler terms, myopia is a condition of the eye where the light that comes in does not directly focus on the retina but in...
.

A number of studies have found that the prevalence of astigmatism increases with age.

Although mild astigmatism may be asymptomatic, higher amounts of astigmatism may cause symptoms such as blurry vision, squinting, asthenopia
Asthenopia
Asthenopia or eye strain is an ophthalmological condition that manifests itself through nonspecific symptoms such as fatigue, pain in or around the eyes, blurred vision, headache and occasional double vision...
, fatigue, or headaches. Some research has pointed to the link between astigmatism and higher prevalence of migraine headaches.

There are a number of tests used by ophthalmologists and optometrists during eye examination
Eye examination
An eye examination is a battery of tests performed by an ophthalmologist, optometrist, or orthoptist assessing vision and ability to focus on and discern objects, as well as other tests and examinations pertaining to the eyes....
s to determine the presence of astigmatism and to quantify the amount and axis of the astigmatism. A Snellen chart
Snellen chart
A Snellen chart is an eye chart used by eye care professionals and others to measure visual acuity. Snellen charts are named after the Dutch ophthalmologist Herman Snellen who developed the chart during 1862...
or other eye chart
Eye chart
An eye chart is a chart used to measure visual acuity. Types of eye charts include the logMAR chart, Snellen chart, Landolt C, and the Lea test.-Procedure:Charts usually display several rows of optotypes , each row in a different size...
s may initially reveal reduced visual acuity
Visual acuity
Visual acuity is acuteness or clearness of vision, which is dependent on the sharpness of the retinal focus within the eye and the sensitivity of the interpretative faculty of the brain....
. A keratometer
Keratometer
A keratometer, also known as a ophthalmometer, is a diagnostic instrument for measuring the curvature of the anterior surface of the cornea, particularly for assessing the extent and axis of astigmatism...
may be used to measure the curvature of the steepest and flattest meridians in the cornea's front surface. Corneal topography
Corneal topography
Corneal topography, also known as photokeratoscopy or videokeratography, is a non-invasive medical imaging technique for mapping the surface curvature of the cornea, the outer structure of the eye...
may also be used to obtain a more accurate representation of the cornea's shape. An autorefractor or retinoscopy
Retinoscopy
Retinoscopy is a technique to obtain an objective measurement of the refractive error of a patient's eyes. The examiner uses a retinoscope to shine light into the patient's eye and observes the reflection off the patient's retina...
may provide an objective estimate of the eye's refractive error and the use of Jackson cross cylinders in a phoropter
Phoropter
A phoropter is an instrument commonly used by eye care professionals during an eye examination, containing different lenses used for refraction of the eye during sight testing, to measure an individual's refractive error and determine his or her eyeglass prescription.Typically, the patient sits...
or trial frame may be used to subjectively refine those measurements.
An alternative technique with the phoropter requires the use of a "clock dial" or "sunburst" chart to determine the astigmatic axis and power. A keratometer may also be used to estimate astigmatism by finding the difference in power between the two primary meridians of the cornea. Javal's rule
Javal's rule
Javal's rule is a mathematical formula used to estimate astigmatism based on keratometry readings. The estimate is useful for high cylinder measures, generally over -2.00 diopters....
can then be used to compute the estimate of astigmatism.

Another refraction technique that is rarely used involves the use of a stenopaic slit (a thin slit aperture) where the refraction is determined in specific meridians - this technique is particularly useful in cases where the patient has a high degree of astigmatism or in refracting patients with irregular astigmatism.

Astigmatism may be corrected with eyeglasses, contact lenses, or refractive surgery
Refractive surgery
Refractive eye surgery is any eye surgery used to improve the refractive state of the eye and decrease or eliminate dependency on glasses or contact lenses. This can include various methods of surgical remodeling of the cornea or cataract surgery. The most common methods today use excimer lasers to...
. Various considerations involving ocular health, refractive status, and lifestyle frequently determine whether one option may be better than another. In those with keratoconus
Keratoconus
Keratoconus , is a degenerative disorder of the eye in which structural changes within the cornea cause it to thin and change to a more conical shape than its normal gradual curve....
, toric contact lenses often enable patients to achieve better visual acuities
Visual acuity
Visual acuity is acuteness or clearness of vision, which is dependent on the sharpness of the retinal focus within the eye and the sensitivity of the interpretative faculty of the brain....
than eyeglasses. Once only available in a rigid gas-permeable form, toric lenses are now available also as soft lenses. If the astigmatism is caused by a problem such as deformation of the eyeball due to a chalazion
Chalazion
A chalazion , also known as a meibomian gland lipogranuloma, is a cyst in the eyelid that is caused by inflammation of a blocked meibomian gland, usually on the upper eyelid. Chalazia differ from styes in that they are subacute and usually painless nodules...
, treating the underlying cause will resolve the astigmatism.