Encyclopedia
Fermo is a town and comune
Comune
In Italy, the comune is the basic administrative division, and may be properly approximated in casual speech by the English word township or municipality.-Importance and function:...
of the Marche
Marche
The population density in the region is below the national average. In 2008, it was 161.5 inhabitants per km2, compared to the national figure of 198.8. It is highest in the province of Ancona , and lowest in the province of Macerata...
, Italy
Italy
Italy , officially the Italian Republic languages]] under the European Charter for Regional or Minority Languages. In each of these, Italy's official name is as follows:;;;;;;;;), is a unitary parliamentary republic in South-Central Europe. To the north it borders France, Switzerland, Austria and...
, in the Province of Fermo
Province of Fermo
The Province of Fermo is a province in the Marche, central Italy, constituted in 2004. The province came into existence in 2009. The administrative centre is the city of Fermo...
.

The great antiquity of the city is attested by the remains of its cyclopean walls. The ancient Firmum Picenum was founded as a Latin colony, consisting of 6000 men, in 264 BC, after the conquest of the Picentes
Picentes
The Picentes or Picentini are Latin exonyms for the people who lived in Picenum in the northern Adriatic coastal plain of ancient Italy. The endonym, if any, and its language are not known for certain....
, as the local headquarters of the Roman power, to which it remained faithful. It was originally governed by five quaestor
Quaestor
A Quaestor was a type of public official in the "Cursus honorum" system who supervised financial affairs. In the Roman Republic a quaestor was an elected official whereas, with the autocratic government of the Roman Empire, quaestors were simply appointed....
s. It was made a colony with full rights after the battle of Philippi
Battle of Philippi
The Battle of Philippi was the final battle in the Wars of the Second Triumvirate between the forces of Mark Antony and Octavian and the forces of Julius Caesar's assassins Marcus Junius Brutus and Gaius Cassius Longinus in 42 BC, at Philippi in Macedonia...
, the 4th Legion
Legio IV Flavia Felix
Legio quarta Flavia Felix , was a Roman legion levied by Vespasian in 70, from the ashes of the Legio IV Macedonica. The legion was active in Moesia Superior in the first half of the 4th century...
being settled there. It lay at the junction of roads to Pausulae, Urbs Salvia, and Asculum
Asculum
Asculum, also known as Ausculum, was the ancient name of two Italian cities.The first is Ascoli Piceno, the Ausculum in ancient Picenum . It is situated in the valley of the Truentus river on the via Salaria. It was originally a Sabine city . Following its defeat by the Romans in 268 BC...
, connected to the coast road by a short branch road from Castellum Firmanum (Porto S. Giorgio).

With the Pentapolis
Pentapolis
A pentapolis, from the Greek words , "five" and , "city" is a geographic and/or institutional grouping of five cities...
, in the 8th century it passed under the authority of the Holy See was thenceforth subject to the vicissitudes of the March of Ancona
March of Ancona
The March of Ancona or marca Anconitana was a frontier march centred on the city of Ancona and, then, Macerata in the Middle Ages...
. In the 10th century it became the capital of the Marchia Firmana. Under the predecessors of Honorius III (1216–27) the bishops of city became prince-bishop
Prince-Bishop
A Prince-Bishop is a bishop who is a territorial Prince of the Church on account of one or more secular principalities, usually pre-existent titles of nobility held concurrently with their inherent clerical office...
s, first with the secular rights of counts, and later as princes of Fermo.

In 1199 it became a free city, and remained independent until 1550, when it was annexed to the Papal States
Papal States
The Papal State, State of the Church, or Pontifical States were among the major historical states of Italy from roughly the 6th century until the Italian peninsula was unified in 1861 by the Kingdom of Piedmont-Sardinia .The Papal States comprised territories under...
.

In the contest between the Hohenstaufen
Hohenstaufen
The House of Hohenstaufen was a dynasty of German kings in the High Middle Ages, lasting from 1138 to 1254. Three of these kings were also crowned Holy Roman Emperor. In 1194 the Hohenstaufens also became Kings of Sicily...
and the papacy, Fermo was besieged and captured several times; in 1176 by Archbishop Christian of Mainz, in 1192 by Emperor Henry Vl, in 1208 by Marcuald, Duke of Ravenna, in 1241 by Emperor Frederick II, and in 1245 by Manfred of Sicily
Manfred of Sicily
Manfred was the King of Sicily from 1258 to 1266. He was a natural son of the emperor Frederick II of Hohenstaufen but his mother, Bianca Lancia , is reported by Matthew of Paris to have been married to the emperor while on her deathbed.-Background:Manfred was born in Venosa...
. After this it was governed by different lords, who ruled as more or less legitimate vassals of the Holy See, e.g. the Monteverdi, Giovanni Visconti and Francesco Sforza (banished 1446), Oliverotto Euffreducci (murdered in 1503 by Cesare Borgia
Cesare Borgia
Cesare Borgia , Duke of Valentinois, was an Italian condottiero, nobleman, politician, and cardinal. He was the son of Pope Alexander VI and his long-term mistress Vannozza dei Cattanei. He was the brother of Lucrezia Borgia; Giovanni Borgia , Duke of Gandia; and Gioffre Borgia , Prince of Squillace...
), who was succeeded by his son Ludovico, killed at the battle of Montegiorgio
Montegiorgio
Montegiorgio is a comune in the Province of Fermo in the Italian region Marche, located about 70 km south of Ancona and about 80 km north of Ascoli Piceno...
in 1520, when Fermo became again directly subjected to the Holy See. 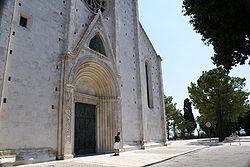 The near municipality of Porto San Giorgio has a fine castle of 1269, blocking the valley that leads to Fermo.

Berat
Berat
Berat is a town located in south-central Albania. As of 2009, the town has an estimated population of around 71,000 people. It is the capital of both the District of Berat and the larger County of Berat...
, Albania Bahía Blanca
Bahía Blanca
Bahía Blanca is a city located in the south-west of the province of Buenos Aires, Argentina, by the Atlantic Ocean, and seat of government of Bahía Blanca Partido. It has a population of 274,509 inhabitants according to the...
, Argentina Weihai
Weihai
Weihai is a city in eastern Shandong Province, People's Republic of China. It is the easternmost prefecture-level city of the province and a major seaport. Between 1898 and 1930, the town was a British colony known as Weihaiwei or the Weihai Garrison , and sometimes as Port Edward...
, People's Republic of China Ansbach
Ansbach
Ansbach, originally Onolzbach, is a town in Bavaria, Germany. It is the capital of the administrative region of Middle Franconia. Ansbach is situated southwest of Nuremberg and north of Munich, on the Fränkische Rezat, a tributary of the Main river. As of 2004, its population was 40,723.Ansbach...
, Germany, since 2006 León, Mexico