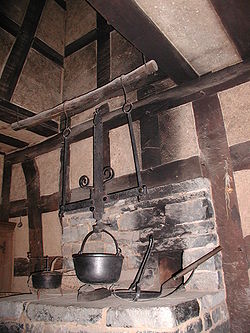 In common historic and modern usage, a hearth (icon) is a brick
Brick
A brick is a block of ceramic material used in masonry construction, usually laid using various kinds of mortar. It has been regarded as one of the longest lasting and strongest building materials used throughout history.-History:...
- or stone
Rock (geology)
In geology, rock or stone is a naturally occurring solid aggregate of minerals and/or mineraloids.The Earth's outer solid layer, the lithosphere, is made of rock. In general rocks are of three types, namely, igneous, sedimentary, and metamorphic...
-lined fireplace
Fireplace
A fireplace is an architectural structure to contain a fire for heating and, especially historically, for cooking. A fire is contained in a firebox or firepit; a chimney or other flue allows gas and particulate exhaust to escape...
or oven
Oven
An oven is a thermally insulated chamber used for the heating, baking or drying of a substance. It is most commonly used for cooking. Kilns, and furnaces are special-purpose ovens...
often used for cooking
Cooking
Cooking is the process of preparing food by use of heat. Cooking techniques and ingredients vary widely across the world, reflecting unique environmental, economic, and cultural traditions. Cooks themselves also vary widely in skill and training...
and/or heating. For centuries, the hearth was considered an integral part of a home
Home
A home is a place of residence or refuge. When it refers to a building, it is usually a place in which an individual or a family can rest and store personal property. Most modern-day households contain sanitary facilities and a means of preparing food. Animals have their own homes as well, either...
, often its central or most important feature. This concept has been generalized to refer to a homeplace or household, as in the terms "hearth and home" and "keep the home fires burning." In fireplace design, the hearth is often considered the visible elements of the fireplace, with emphasis upon the floor level extension of masonry
Masonry
Masonry is the building of structures from individual units laid in and bound together by mortar; the term masonry can also refer to the units themselves. The common materials of masonry construction are brick, stone, marble, granite, travertine, limestone; concrete block, glass block, stucco, and...
associated with the fireplace mantel
Fireplace mantel
Fireplace mantel or mantelpiece, also known as a chimneypiece, originated in medieval times as a hood that projected over a grate to catch the smoke. The term has evolved to include the decorative framework around the fireplace, and can include elaborate designs extending to the ceiling...
. 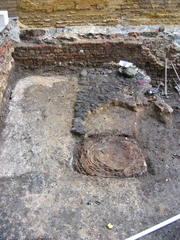 Lined hearths are easily identified by the presence of fire-cracked rock
Fire-cracked rock
In archaeology, fire-cracked rock, or FCR, is rock of any type that has been altered and split by deliberate heating. It is a feature of many archaeological sites, particularly in the south-central United States...
, often created when the heat from the fires inside the hearths chemically altered and cracked the stone. Often present are fragmented fish
Fish
Fish are a paraphyletic group of organisms that consist of all gill-bearing aquatic vertebrate animals that lack limbs with digits. Included in this definition are the living hagfish, lampreys, and cartilaginous and bony fish, as well as various extinct related groups...
and animal
Animal
Animals are a major group of multicellular, eukaryotic organisms of the kingdom Animalia or Metazoa. Their body plan eventually becomes fixed as they develop, although some undergo a process of metamorphosis later on in their life. Most animals are motile, meaning they can move spontaneously and...
bones, carbon
Carbon
Carbon is the chemical element with symbol C and atomic number 6. As a member of group 14 on the periodic table, it is nonmetallic and tetravalent—making four electrons available to form covalent chemical bonds...
ized shell, charcoal
Charcoal
Charcoal is the dark grey residue consisting of carbon, and any remaining ash, obtained by removing water and other volatile constituents from animal and vegetation substances. Charcoal is usually produced by slow pyrolysis, the heating of wood or other substances in the absence of oxygen...
, ash, and other waste products, all embedded in a sequence
Sequence (archaeological)
The archaeological sequence or sequence for short, on a specific archaeological site can be defined on two levels of rigour.# Normally it is adequate to equate it to archaeological record. However, the two terms are not exactly interchangeable...
of soil
Soil
Soil is a natural body consisting of layers of mineral constituents of variable thicknesses, which differ from the parent materials in their morphological, physical, chemical, and mineralogical characteristics...
that has been deposited atop the hearth. Unlined hearths, which are less easily identified, may also include these materials. Because of the organic
Organic compound
An organic compound is any member of a large class of gaseous, liquid, or solid chemical compounds whose molecules contain carbon. For historical reasons discussed below, a few types of carbon-containing compounds such as carbides, carbonates, simple oxides of carbon, and cyanides, as well as the...
nature of most of these items, they can be used to pinpoint the date the hearth was last used via the process of radiocarbon dating
Radiocarbon dating
Radiocarbon dating is a radiometric dating method that uses the naturally occurring radioisotope carbon-14 to estimate the age of carbon-bearing materials up to about 58,000 to 62,000 years. Raw, i.e. uncalibrated, radiocarbon ages are usually reported in radiocarbon years "Before Present" ,...
. Although carbon dates can be negatively affected if the users of the hearth burned old wood or coal, the process is typically quite reliable. This was the most common way to cook, and to heat interior spaces in cool seasons.

In the Byzantine Empire
Byzantine Empire
The Byzantine Empire was the Eastern Roman Empire during the periods of Late Antiquity and the Middle Ages, centred on the capital of Constantinople. Known simply as the Roman Empire or Romania to its inhabitants and neighbours, the Empire was the direct continuation of the Ancient Roman State...
a tax on hearths known as kapnikon was first explicitly mentioned for the reign of Nicephorus I (802–811) although its context implies that it was already then old and established and perhaps it should be taken back to the 7th century AD. Kapnikon was a tax raised on households without exceptions for the poor.

In England, a tax on hearths was introduced on 19 May 1662. Householders were required to pay a charge of two shilling
Shilling
The shilling is a unit of currency used in some current and former British Commonwealth countries. The word shilling comes from scilling, an accounting term that dates back to Anglo-Saxon times where it was deemed to be the value of a cow in Kent or a sheep elsewhere. The word is thought to derive...
s per annum for each hearth, with half the payment due at Michaelmas
Michaelmas
Michaelmas, the feast of Saint Michael the Archangel is a day in the Western Christian calendar which occurs on 29 September...
and half at Lady Day
Lady Day
In the western Liturgical year, Lady Day is the traditional name of the Feast of the Annunciation of the Blessed Virgin in some English speaking countries. It is the first of the four traditional English quarter days. The "Lady" was the Virgin Mary. The term derives from Middle English, when some...
. Exemptions to the tax were granted, to those in receipt of poor relief
Poor Relief Act 1662
The Poor Relief Act 1662 was an Act of the Cavalier Parliament of England. It was an Act for the Better Relief of the Poor of this Kingdom and is also known as the Settlement Act or, more honestly, the Settlement and Removal Act. The purpose of the Act was to establish the parish to which a person...
, those whose houses were worth less than 20 shillings a year and those who paid neither church nor poor rates. Also exempt were charitable institutions such as schools and almshouses, and industrial hearths with the exception of smiths' forges and bakers' ovens. The returns were lodged with the Clerk of the Peace
Clerk of the Peace
A clerk of the peace held an office in England and Wales whose responsibility was the records of the Quarter Sessions and the framing of presentments and indictments. They had legal training, so that they could advise justices of the peace.-England and Wales:...
between 1662 and 1688.

Hearth tax records are important to local historians
Local history
Local history is the study of history in a geographically local context and it often concentrates on the local community. It incorporates cultural and social aspects of history...
as they provide an indication of the size of each assessed house at the time. The numbers of hearths are generally proportional to the size of the house. The assessments can be used to indicate the numbers and local distribution of larger and smaller houses. Not every room had a hearth, and not all houses of the same size had exactly the same number of hearths, so they are not an exact measure of house size. Roehampton University
Roehampton University
The University of Roehampton is a campus university in the United Kingdom, situated on three major sites in Roehampton, south-west London.-History:...
has an ongoing project which places hearth tax data in a national framework by providing a series of standard bands of wealth applicable to each county and city.

Hearth is also a term for a kindred
Kindred
In the Heathen movements, a kindred is a local worship group and organisational unit. Other terms used are hearth, theod , blotgroup, sippe, and other less popular ones such as garth, stead, and others....
, or local worship group, in the neopaganism religion Ásatrú
Ásatrú
is a form of Germanic neopaganism which developed in the United States from the 1970s....
.

In Greek Mythology, Hestia
Hestia
In Greek mythology Hestia , first daughter of Cronus and Rhea , is the virgin goddess of the hearth, architecture, and of the right ordering of domesticity and the family. She received the first offering at every sacrifice in the household. In the public domain, the hearth of the prytaneum...
is the goddess of the hearth. In Roman Religion, Vesta
Vesta
-Astronomy:* 4 Vesta, second largest asteroid in the solar system, also a proto-planet, named after the Roman deity* Vesta family, group of asteroids that includes 4 Vesta- Places :* Monte Vesta, Lombardy, Italy* Temple of Vesta, Rome, Italy...
is the Goddess of the hearth.

In Ancient Persia, according to Zoroastrian traditions, every house was expected to have a hearth for offering sacrifices and prayers.
The source of this article is wikipedia, the free encyclopedia.  The text of this article is licensed under the GFDL.