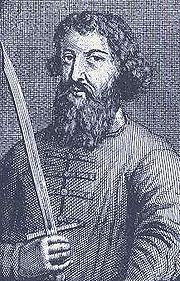 Archil (1647 — April 16, 1713), was a Georgian
Georgia (country)
Georgia is a sovereign state in the Caucasus region of Eurasia. Located at the crossroads of Western Asia and Eastern Europe, it is bounded to the west by the Black Sea, to the north by Russia, to the southwest by Turkey, to the south by Armenia, and to the southeast by Azerbaijan. The capital of...
prince of the Bagrationi Dynasty and poet. He ruled as king of Imereti
Kingdom of Imereti
The Kingdom of Imereti was established in 1455 by a member of the house of Bagration when the Kingdom of Georgia was dissolved into rival kingdoms. Before that time, Imereti was considered a separate kingdom within the Kingdom of Georgia, to which a cadet branch of the Bagration royal family held...
in western Georgia (1661—1663, 1678—1679, 1690—1691, 1695—1696, and 1698) and of Kakheti
Kakheti
Kakheti is a historical province in Eastern Georgia inhabited by Kakhetians who speak a local dialect of Georgian. It is bordered by the small mountainous province of Tusheti and the Greater Caucasus mountain range to the north, Russian Federation to the Northeast, Azerbaijan to the Southeast, and...
in eastern Georgia (1664-75). After a series of unsuccessful attempts to establish himself on the throne of Imereti, Archil retired to Russia
Russia
Russia or , officially known as both Russia and the Russian Federation , is a country in northern Eurasia. It is a federal semi-presidential republic, comprising 83 federal subjects...
where he spearheaded the cultural life of a local Georgian community.

Archil was the son of Vakhtang V Shahnawaz
Vakhtang V of Kartli
Vakhtang V was the king of Kartli from 1658 until his death, who ruled as a vassal wali for the Persian shah. He is also known under the name of Shah Nawaz, which he assumed on being obliged outwardly to conform to Islam.-Life:...
of Kartli
Kartli
Kartli is a historical region in central-to-eastern Georgia traversed by the river Mtkvari , on which Georgia's capital, Tbilisi, is situated. Known to the Classical authors as Iberia, Kartli played a crucial role in ethnic and political consolidation of the Georgians in the Middle Ages...
, who, under the Persian
Safavid dynasty
The Safavid dynasty was one of the most significant ruling dynasties of Iran. They ruled one of the greatest Persian empires since the Muslim conquest of Persia and established the Twelver school of Shi'a Islam as the official religion of their empire, marking one of the most important turning...
protection, attempted to reunify a fragmented Kingdom of Georgia
Kingdom of Georgia
The Kingdom of Georgia was a medieval monarchy established in AD 978 by Bagrat III.It flourished during the 11th and 12th centuries, the so-called "golden age" of the history of Georgia. It fell to the Mongol invasions of the 13th century, but managed to re-assert sovereignty by 1327...
under his crown. Having brought the neighboring eastern kingdom of Kakheti under his control, Vakhtang marched into western Georgia in 1661, deposed King Bagrat V of Imereti
Bagrat V of Imereti
Bagrat V , of the Bagrationi Dynasty, was a king of Imereti, whose troubled reign in the years of 1660—1661, 1663—1668, 1669—1678, and 1679—1681, was marked by extreme instability and feudal anarchy in the kingdom....
, and crowned his fourteen-year old son Archil king at Kutaisi
Kutaisi
Kutaisi is Georgia's second largest city and the capital of the western region of Imereti. It is 221 km to the west of Tbilisi.-Geography:...
, capital of Imereti. The Ottoman
Ottoman Empire
The Ottoman EmpireIt was usually referred to as the "Ottoman Empire", the "Turkish Empire", the "Ottoman Caliphate" or more commonly "Turkey" by its contemporaries...
government strongly objected to what it considered a Persian-inspired incursion into the Turkish zone of influence. A Turkish ultimatum was soon received in Isfahan, threatening a declaration of war if Shahnavaz maintained his son on the throne of western Georgia. Shahnavaz was forced to recall Archil from Kutaisi in 1663 and to restore the rightful king, Bagrat. Instead, Vakhtang installed Archil as king of Kakheti in 1664. To gain the shah's consent, Archil was prevailed upon, much against his will, to become a nominal convert to Islam
Islam
Islam . The most common are and .   : Arabic pronunciation varies regionally. The first vowel ranges from ~~. The second vowel ranges from ~~~...
, assuming the title of Shah-Nazar-Khan. In 1664, Archil defeated an attempt by the rival Kakhetian prince, Erekle
Erekle I of Kakheti
Heraclius I or Nazar Alī Khān , of the Bagrationi Dynasty, was a Georgian monarch who ruled the kingdoms of Kakheti and Kartli under the protection of the Safavid dynasty of Iran....
, to regain his father's crown, and achieved a degree of stability and prosperity in Kakheti.

In 1675, however, due largely to the intrigues by the Persian grand vizier
Grand Vizier
Grand Vizier, in Turkish Vezir-i Azam or Sadr-ı Azam , deriving from the Arabic word vizier , was the greatest minister of the Sultan, with absolute power of attorney and, in principle, dismissable only by the Sultan himself...
Shaykh' Ali Khan, Archil abandoned Kakheti and defected to the Turkish frontier pasha
Pasha
Pasha or pascha, formerly bashaw, was a high rank in the Ottoman Empire political system, typically granted to governors, generals and dignitaries. As an honorary title, Pasha, in one of its various ranks, is equivalent to the British title of Lord, and was also one of the highest titles in...
of Akhaltsikhe
Akhaltsikhe
Akhaltsikhe is a small city in Georgia's southwestern region of Samtskhe-Javakheti. It is situated on the both banks of a small river Potskhovi, which separates the city to the old city in the north and new in the south. The name of the city translates from Georgian as "new fortress".- History...
who promised him the crown of Imereti. He was soon reestablished in Kutaisi with the aid of the pasha of Akhaltiskhe, though without the consent of the Sublime Porte. The Ottoman agents had the pasha executed, and deposed Archil in 1679. He fled to Russia, but was not allowed to Moscow
Moscow
Moscow is the capital, the most populous city, and the most populous federal subject of Russia. The city is a major political, economic, cultural, scientific, religious, financial, educational, and transportation centre of Russia and the continent...
until 1686. Encouraged by his brother, King George XI of Kartli
George XI of Kartli
George XI was a Georgian monarch who ruled Eastern Georgia from 1676 to 1688 and again from 1703 to 1709. He is best known for his struggle against the Safavid Persia which dominated his weakened kingdom. Being an Eastern Orthodox Christian, he converted to Islam prior to his appointment as...
, Archil returned to Georgia in 1690 and succeeded in regaining the Imeretian throne, only to be deposed again by the local nobility in 1691. During the next few years, he made several attempts to seize the crown, waging a guerrilla war against the Turks and the aristocratic opposition led by Prince Abashidze
Abashidze
Abashidze is a Georgian family and a former princely house. Appearing in the 15th century, they achieved prominence in the Kingdom of Imereti in western Georgia in the late 17th century and branched out in eastern Georgian kingdoms of Kakheti and Kartli as well as the then-Ottoman-held...
. Eventually Archil gave up hope of reestablishing himself in Imereti and, in 1699, crossed the Caucasus Mountains
Greater Caucasus
Greater Caucasus , sometimes translated as "Caucasus Major", "Big Caucasus" or "Large Caucasus") is the major mountain range of the Caucasus Mountains....
once more into Russia where he settled in Vsesviatskoye near Moscow. 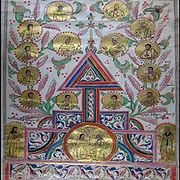 He was on friendly terms with Peter I of Russia
Peter I of Russia
Peter the Great, Peter I or Pyotr Alexeyevich Romanov Dates indicated by the letters "O.S." are Old Style. All other dates in this article are New Style. ruled the Tsardom of Russia and later the Russian Empire from until his death, jointly ruling before 1696 with his half-brother, Ivan V...
who gave orders to prepare an expedition to restore Archil to the throne of Imereti. However, the plan was rendered abortive on account of the defeat inflicted by the Swedes
Sweden
Sweden , officially the Kingdom of Sweden , is a Nordic country on the Scandinavian Peninsula in Northern Europe. Sweden borders with Norway and Finland and is connected to Denmark by a bridge-tunnel across the Öresund....
on the Russian army at Narva
Battle of Narva (1700)
The Battle of Narva on 19 November 1700 was an early battle in the Great Northern War. A Swedish relief army under Charles XII of Sweden defeated a Russian siege force three times its size. Before, Charles XII had forced Denmark-Norway to sign the Treaty of Travendal...
in 1700. This, in addition to frustrating Archil's hopes of regaining his throne, brought tragedy into his family life. Alexander
Prince Alexander of Imereti
Prince Alexander of Imereti , also known as Tsarevich Aleksandr Archilovich Imeretinsky was a Georgian prince of the Kingdom of Imereti who lived as an émigré in the Tsardom of Russia and subsequently served as an artillery commander under Tsar Peter I of Russia...
, son of Archil, who commanded Russian artillery at Narva, was taken prisoner by the Swedes, and had to spend ten years in captivity. Archil attempted to achieve the release of his son through the Austria
Austria
Austria , officially the Republic of Austria , is a landlocked country of roughly 8.4 million people in Central Europe. It is bordered by the Czech Republic and Germany to the north, Slovakia and Hungary to the east, Slovenia and Italy to the south, and Switzerland and Liechtenstein to the...
n mediation, and later sent a personal letter to Charles XII of Sweden
Charles XII of Sweden
Charles XII also Carl of Sweden, , Latinized to Carolus Rex, Turkish: Demirbaş Şarl, also known as Charles the Habitué was the King of the Swedish Empire from 1697 to 1718...
. It was not until 1710, however, that Alexander was released. Severely ill, he died on his way back to Russia. The death of Alexander was a bitter blow to Archil, who did not long survive his son. He died in 1713 and was buried in the Donskoy Monastery
Donskoy Monastery
Donskoy Monastery is a major monastery in Moscow, founded in 1591 in commemoration of Moscow's deliverance from an imminent threat of Khan Kazy-Girey’s invasion...
at Moscow.