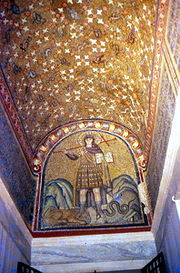 The Archbishop's Chapel (or Archiepiscopal Chapel) is a chapel
Chapel
A chapel is a building used by Christians as a place of fellowship and worship. It may be part of a larger structure or complex, such as a church, college, hospital, palace, prison or funeral home, located on board a military or commercial ship, or it may be an entirely free-standing building,...
on the first floor of the bishops' palace in Ravenna
Ravenna
Ravenna is the capital city of the Province of Ravenna in the Emilia-Romagna region of Italy and the second largest comune in Italy by land area, although, at , it is little more than half the size of the largest comune, Rome...
, Italy
Italy
Italy , officially the Italian Republic languages]] under the European Charter for Regional or Minority Languages. In each of these, Italy's official name is as follows:;;;;;;;;), is a unitary parliamentary republic in South-Central Europe. To the north it borders France, Switzerland, Austria and...
, the smallest of the famous mosaic
Mosaic
Mosaic is the art of creating images with an assemblage of small pieces of colored glass, stone, or other materials. It may be a technique of decorative art, an aspect of interior decoration, or of cultural and spiritual significance as in a cathedral...
sites of the city. It is a private oratory
Oratory (worship)
An oratory is a Christian room for prayer, from the Latin orare, to pray.-Catholic church:In the Roman Catholic Church, an oratory is a structure other than a parish church, set aside by ecclesiastical authority for prayer and the celebration of Mass...
of Trinitarian
Trinity
The Christian doctrine of the Trinity defines God as three divine persons : the Father, the Son , and the Holy Spirit. The three persons are distinct yet coexist in unity, and are co-equal, co-eternal and consubstantial . Put another way, the three persons of the Trinity are of one being...
bishops dating from the turn of the 6th century. Although commonly attributed to St. Peter Chrysologus
Peter Chrysologus
Peter Chrysologus was Bishop of Ravenna from about AD 433 until his death. He is revered as a saint by the Roman Catholic Church and was declared a Doctor of the Church by Pope Benedict XIII in 1729.-Life:...
, Archbishop of Ravenna from 433–450, the chapel was actually built by Peter II shortly after he became archbishop in 495. The mosaics date from the original construction, or soon after.

The tiny cruciform chapel is currently dedicated to Saint Andrew
Saint Andrew
Saint Andrew , called in the Orthodox tradition Prōtoklētos, or the First-called, is a Christian Apostle and the brother of Saint Peter. The name "Andrew" , like other Greek names, appears to have been common among the Jews from the 3rd or 2nd century BC. No Hebrew or Aramaic name is recorded for him...
, although the original dedication was to the Saviour
Names and titles of Jesus in the New Testament
Two names and a variety of titles are used to refer to Jesus in the New Testament.In Christianity, the two names Jesus and Emmanuel that refer to Jesus in the New Testament have salvific attributes...
, as evidenced by a lunette
Lunette
In architecture, a lunette is a half-moon shaped space, either filled with recessed masonry or void. A lunette is formed when a horizontal cornice transects a round-headed arch at the level of the imposts, where the arch springs. If a door is set within a round-headed arch, the space within the...
over the vestibule
Vestibule (architecture)
A vestibule is a lobby, entrance hall, or passage between the entrance and the interior of a building.The same term can apply to structures in modern or ancient roman architecture. In modern architecture vestibule typically refers to a small room or hall between an entrance and the interior of...
door representing Christ treading on the beasts
Christ treading on the beasts
Christ treading on the beasts is a subject found in Late Antique and Early Medieval art, though it is never common. It is a variant of the "Christ in Triumph" subject of the resurrected Christ, and shows a standing Christ with his feet on animals, often holding a cross-staff which may have a...
, dressed as a general or victorious Emperor. The lower parts of the walls are lined with marble slabs, while the rest of the interior used to be covered with rich, tapestry-like mosaic
Mosaic
Mosaic is the art of creating images with an assemblage of small pieces of colored glass, stone, or other materials. It may be a technique of decorative art, an aspect of interior decoration, or of cultural and spiritual significance as in a cathedral...
s, as the vault still is. Some parts of these survive, while others were substituted with tempera
Tempera
Tempera, also known as egg tempera, is a permanent fast-drying painting medium consisting of colored pigment mixed with a water-soluble binder medium . Tempera also refers to the paintings done in this medium. Tempera paintings are very long lasting, and examples from the 1st centuries AD still exist...
paintings by Luca Longhi
Luca Longhi
Luca Longhi was an Italian painter of the Mannerist period, born and active near Ravenna, where he mainly produced religious paintings and portraits....
in the 16th century.

According to the ICOMOS evaluation of this World Heritage Site
World Heritage Site
A UNESCO World Heritage Site is a place that is listed by the UNESCO as of special cultural or physical significance...
, "the significance of this property is the fact that it is the only Early Christian private oratory
Oratory (worship)
An oratory is a Christian room for prayer, from the Latin orare, to pray.-Catholic church:In the Roman Catholic Church, an oratory is a structure other than a parish church, set aside by ecclesiastical authority for prayer and the celebration of Mass...
that has survived to the present day. Its iconography
Iconography
Iconography is the branch of art history which studies the identification, description, and the interpretation of the content of images. The word iconography literally means "image writing", and comes from the Greek "image" and "to write". A secondary meaning is the painting of icons in the...
is also important by virtue of its strongly anti-Arian
Arianism
Arianism is the theological teaching attributed to Arius , a Christian presbyter from Alexandria, Egypt, concerning the relationship of the entities of the Trinity and the precise nature of the Son of God as being a subordinate entity to God the Father...
symbolism".http://whc.unesco.org/archive/advisory_body_evaluation/788.pdf
The source of this article is wikipedia, the free encyclopedia.  The text of this article is licensed under the GFDL.