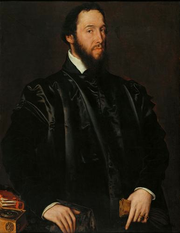 Antoine Perrenot de Granvelle (20 August 1517 – 21 September 1586), Comte de La Baume Saint Amour, was a Burgundian statesman, made a cardinal
Cardinal (Catholicism)
A cardinal is a senior ecclesiastical official, usually an ordained bishop, and ecclesiastical prince of the Catholic Church. They are collectively known as the College of Cardinals, which as a body elects a new pope. The duties of the cardinals include attending the meetings of the College and...
, who followed his father as a leading minister of the Spanish Habsburg
Habsburg
The House of Habsburg , also found as Hapsburg, and also known as House of Austria is one of the most important royal houses of Europe and is best known for being an origin of all of the formally elected Holy Roman Emperors between 1438 and 1740, as well as rulers of the Austrian Empire and...
s, and was one of the most influential European politicians during the time which immediately followed the appearance of Protestantism
Protestantism
Protestantism is one of the three major groupings within Christianity. It is a movement that began in Germany in the early 16th century as a reaction against medieval Roman Catholic doctrines and practices, especially in regards to salvation, justification, and ecclesiology.The doctrines of the...
in Europe; "the dominating Imperial statesman of the whole century".
He was also a notable art collector, the "greatest private collector of his time, the friend and patron of Titian and Leoni and many other artists".

He was born at Besançon
Free Imperial City of Besançon
The Imperial City of Besançon was a self-governing city that was part of the Holy Roman Empire.From 1184 until 1654 the City of Besançon was a free imperial city as shown by the coat of arms until today and called Bisanz. At first it was governed by the archbishop of Besançon, although later most...
, now in France, then a self governing Imperial Free City surrounded by the Imperial territory of the Franche-Comté
Franche-Comté
Franche-Comté the former "Free County" of Burgundy, as distinct from the neighbouring Duchy, is an administrative region and a traditional province of eastern France...
. His father, Nicholas Perrenot de Granvelle (1484–1550), afterwards became chancellor of the empire under Charles V, Holy Roman Emperor
Charles V, Holy Roman Emperor
Charles V was ruler of the Holy Roman Empire from 1519 and, as Charles I, of the Spanish Empire from 1516 until his voluntary retirement and abdication in favor of his younger brother Ferdinand I and his son Philip II in 1556.As...
, held an influential position in the Netherlands, and from 1530 until his death he was one of the emperor's most trusted advisers in Germany. On the completion of his studies in law at Padua
Padua
Padua is a city and comune in the Veneto, northern Italy. It is the capital of the province of Padua and the economic and communications hub of the area. Padua's population is 212,500 . The city is sometimes included, with Venice and Treviso, in the Padua-Treviso-Venice Metropolitan Area, having...
and in divinity at Leuven
Leuven
Leuven is the capital of the province of Flemish Brabant in the Flemish Region, Belgium...
, Antoine held a canonry at Besançon
Besançon
Besançon , is the capital and principal city of the Franche-Comté region in eastern France. It had a population of about 237,000 inhabitants in the metropolitan area in 2008...
, then promoted to the bishopric of Arras with a dispensation for his age of barely twenty-three (1540). He was ordained priest in 1540.

In his episcopal capacity he attended several diets of the empire, as well as the opening meetings of the Council of Trent
Council of Trent
The Council of Trent was the 16th-century Ecumenical Council of the Roman Catholic Church. It is considered to be one of the Church's most important councils. It convened in Trent between December 13, 1545, and December 4, 1563 in twenty-five sessions for three periods...
, which he addressed on behalf of Charles V; and the influence of his father, now chancellor, led to his being entrusted with many difficult and delicate pieces of public business, in the execution of which he developed a talent for diplomacy, and at the same time acquired an intimate acquaintance with most of the currents of European politics. He was involved in the settlement of the terms of peace after the defeat of the Schmalkaldic League
Schmalkaldic League
The Schmalkaldic League was a defensive alliance of Lutheran princes within the Holy Roman Empire during the mid-16th century. Although originally started for religious motives soon after the start of the Protestant Reformation, its members eventually intended for the League to replace the Holy...
at the Battle of Mühlberg
Battle of Mühlberg
The Battle of Mühlberg was a large battle at Mühlberg in the Electorate of Saxony during the Protestant Reformation at which the Catholic princes of the Holy Roman Empire led by the Emperor Charles I of Spain and V of the Holy Roman Empire decisively defeated the Lutheran Schmalkaldic League of...
in 1547, a settlement in which, to say the least, some particularly sharp practice was exhibited. In 1550, he succeeded his father in the office of secretary of state; in this capacity he attended Charles in the war with Maurice of Saxony, accompanied him in the flight from Innsbruck
Innsbruck
- Main sights :- Buildings :*Golden Roof*Kaiserliche Hofburg *Hofkirche with the cenotaph of Maximilian I, Holy Roman Emperor*Altes Landhaus...
, and afterwards drew up the Peace of Passau
Peace of Passau
Holy Roman Emperor Charles V had won a victory against Protestantism in the Schmalkaldic War of 1547. Many Protestant princes were unhappy with the religious terms of the Augsburg Interim imposed after this victory. In January 1552, led by Maurice of Saxony, many formed an alliance with Henry II of...
(August 1552).

Nominally this withdrawal was only of a temporary character, but it proved to be final. The following six years were spent in comparative quiet, broken, however, by a visit to Rome in 1565; but in 1570, Granvelle, at the call of Philip, resumed public life by accepting another mission to Rome. Here he helped to arrange the alliance between the Papacy, Venice and Spain against the Turks, an alliance which was responsible for the victory of Lepanto
Battle of Lepanto (1571)
The Battle of Lepanto took place on 7 October 1571 when a fleet of the Holy League, a coalition of Catholic maritime states, decisively defeated the main fleet of the Ottoman Empire in five hours of fighting on the northern edge of the Gulf of Patras, off western Greece...
. In the same year he became viceroy of Naples
Naples
Naples is a city in Southern Italy, situated on the country's west coast by the Gulf of Naples. Lying between two notable volcanic regions, Mount Vesuvius and the Phlegraean Fields, it is the capital of the region of Campania and of the province of Naples...
, a post of some difficulty and danger, which for five years he occupied with ability and success. He was summoned to Madrid
Madrid
Madrid is the capital and largest city of Spain. The population of the city is roughly 3.3 million and the entire population of the Madrid metropolitan area is calculated to be 6.271 million. It is the third largest city in the European Union, after London and Berlin, and its metropolitan...
in 1575 by Philip II to be president of the council for Italian affairs. Among the more delicate negotiations of his later years were those of 1580, which had for their object the ultimate union of the crowns of Spain and Portugal, and those of 1584, which resulted in a check to France by the marriage of the Spanish infanta Catherine to Charles Emmanuel I of Savoy. In the same year he was made archbishop of Besançon, but meanwhile he had been stricken with a lingering disease; he was never enthroned, but died at Madrid in 1586. His body was taken to Besançon Cathedral, where his father had been buried.

Though he was painted by Titian and Mor, more famous than any portrait of Granvelle himself is the portrait of his dwarf and his mastiff by Mor, now at the Musée du Louvre. which perhaps initiated the Spanish tradition of portraits of court dwarves. The Flemish Renaissance humanist Justus Lipsius
Justus Lipsius
Justus Lipsius was a Southern-Netherlandish philologist and humanist. Lipsius wrote a series of works designed to revive ancient Stoicism in a form that would be compatible with Christianity. The most famous of these is De Constantia...
was Granvelle's secretary for a period in Rome. He also corresponded with the composers Lassus and Adrian Willaert
Adrian Willaert
Adrian Willaert was a Flemish composer of the Renaissance and founder of the Venetian School. He was one of the most representative members of the generation of northern composers who moved to Italy and transplanted the polyphonic Franco-Flemish style there....
He had a magnificent library, some of which remains at Besançon.
The source of this article is wikipedia, the free encyclopedia.  The text of this article is licensed under the GFDL.