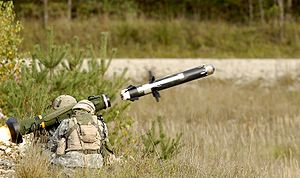 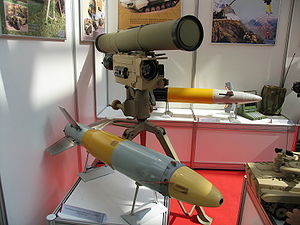 An anti-tank missile (ATM), anti-tank guided missile (ATGM), anti-tank guided weapon (ATGW) or anti-armor guided weapon is a guided
Missile guidance
Missile guidance refers to a variety of methods of guiding a missile or a guided bomb to its intended target. The missile's target accuracy is a critical factor for its effectiveness...
missile
Missile
Though a missile may be any thrown or launched object, it colloquially almost always refers to a self-propelled guided weapon system.-Etymology:The word missile comes from the Latin verb mittere, meaning "to send"...
primarily designed to hit and destroy heavily-armored military vehicles.

ATGMs range in size from shoulder-launched weapons which can be transported by a single soldier, to larger tripod
Tripod
A tripod is a portable three-legged frame, used as a platform for supporting the weight and maintaining the stability of some other object. The word comes from the Greek tripous, meaning "three feet". A tripod provides stability against downward forces, horizontal forces and moments about the...
-mounted weapons which require a squad or team to transport and fire, to vehicle and aircraft mounted missile systems.

The introduction of smaller, man-portable ATGMs with larger warhead
Warhead
The term warhead refers to the explosive material and detonator that is delivered by a missile, rocket, or torpedo.- Etymology :During the early development of naval torpedoes, they could be equipped with an inert payload that was intended for use during training, test firing and exercises. This...
s to the modern battlefield has given infantry the ability to defeat light
Light tank
A light tank is a tank variant initially designed for rapid movement, and now primarily employed in low-intensity conflict. Early light tanks were generally armed and armored similar to an armored car, but used tracks in order to provide better cross-country mobility.The light tank was a major...
and medium tank
Medium tank
Medium tank was a classification of tanks; the medium being intermediate in size and weight and armament between heavy tanks and light tanks.The medium tank concept has been eclipsed by the main battle tank.-History:...
s at great ranges, though main battle tanks using composite and reactive armors have proven to be resistant to smaller ATGMs. Earlier infantry anti-tank weapons such as anti-tank rifle
Anti-tank rifle
An anti-tank rifle is a rifle designed to penetrate the armour of vehicles, particularly tanks. The usefulness of rifles for this purpose ran from the introduction of tanks in World War I and until the Korean War...
s, anti-tank missiles and magnetic anti-tank mine
Anti-tank mine
An anti-tank mine, , is a type of land mine designed to damage or destroy vehicles including tanks and armored fighting vehicles....
s had limited armor-penetration abilities and/or required a soldier to approach the target closely. 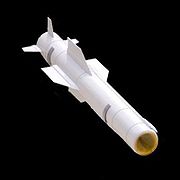 First-generation manually command guided
Command guided
Command guidance is a type of missile guidance in which a ground station or aircraft relay signals to a guided missile via radio and tell the missile where to steer in order to intercept its target. Additionally, it is possible to send a command to the missile to detonate, even if the missile...
MCLOS
MCLOS
MCLOS is a first-generation method for guiding guided missiles.With an MCLOS missile, the operator must track the missile and the target simultaneously and guide the missile to the target. Typically the missile is steered with a joystick, and its path is observed through a periscope-type...
missiles to become operational and to see combat was the French Nord SS.10 in the early 1950s which require input from an operator using a joystick or similar device to steer the missile to the target. The disadvantage is that the operator must keep the sights cross hairs on the target and then steer the missile into the cross hairs—i.e. the line-of-sight. To do this the operator must be well trained (spending hundreds of hours on a simulator) and must remain stationary and in view of the target during the flight time of the missile. Because of this, the operator is vulnerable while guiding the missile.

Second-generation semi-automatically command guided SACLOS
SACLOS
SACLOS is an acronym for Semi-Automatic Command to Line of Sight, a second-generation method of missile guidance. In SACLOS, the operator has to continually point a sighting device at the target while the missile is in flight...
missiles require the operator to only keep the sights on the target until impact. Automatic guidance commands are sent to the missile through wires
Wire-guided missile
A wire-guided missile is a missile that is guided by signals sent to it via thin wires connected between the missile and its guidance mechanism, which is located somewhere near the launch site. As the missile flies, the wires are reeled out behind it...
or radio
Radio
Radio is the transmission of signals through free space by modulation of electromagnetic waves with frequencies below those of visible light. Electromagnetic radiation travels by means of oscillating electromagnetic fields that pass through the air and the vacuum of space...
, or the missile relies on laser marking
Beam riding
Beam-riding, also known as beam guidance, is a technique of directing a missile to its target by means of radar or a laser beam. The name refers to the way the missile flies down the guidance beam, which is aimed at the target...
or a TV camera view from the nose of the missile. Examples are the Russian 9M133 Kornet
9M133 Kornet
The Kornet is a Russian anti-tank missile . It is a second generation ATGM intended to deal with main battle tanks and to engage slow and low flying helicopters, but is not intended to fully replace previous systems, due to the cost...
and the American Hellfire I
AGM-114 Hellfire
The AGM-114 Hellfire is an air-to-surface missile developed primarily for anti-armor use. It has multi-mission, multi-target precision-strike capability, and can be launched from multiple air, sea, and ground platforms. The Hellfire missile is the primary 100 lb-class air-to-ground precision...
missiles. Again the operator must remain stationary during the missile's flight.

Third-generation guidance systems rely on a laser, electro-optical imager (IIR
Thermographic camera
A thermographic camera or infrared camera is a device that forms an image using infrared radiation, similar to a common camera that forms an image using visible light...
) seeker or a W band radar seeker in the nose of the missile. Once the target is identified the missile needs no further guidance during flight; it is "fire-and-forget
Fire-and-forget
Fire-and-forget is a third-generation method of missile guidance. The military uses the term for a type of missile which does not require further guidance after launch such as illumination of the target or wire guidance , and can hit its target without the launcher being in line-of-sight of the...
", and the missile operator is free to retreat. However, fire-and-forget missiles are more subject to electronic countermeasures than MCLOS and SACLOS missiles. Examples include the Russian Vikhr, German PARS 3 LR, Israeli LAHAT
LAHAT
The LAHAT is a third generation semi-active laser homing low-weight anti-tank guided missile developed since 1992 and manufactured by Israel Aerospace Industries...
and Spike
Spike (missile)
Spike is a fourth generation man-portable fire-and-forget anti-tank guided missile with tandem-charged HEAT warhead, developed and designed by the Israeli company Rafael Advanced Defense Systems and in service with a number of nations....
and the Indian Nag
Nag missile
Nag is a Fourth generation "Fire-and-forget" anti-tank missile developed in India. It is one of five missile systems developed by the Defence Research and Development Organisation under the Integrated Guided Missile Development Program...
.

Most modern ATGMs have shaped charge
Shaped charge
A shaped charge is an explosive charge shaped to focus the effect of the explosive's energy. Various types are used to cut and form metal, to initiate nuclear weapons, to penetrate armor, and in the oil and gas industry...
high explosive (HEAT
High explosive anti-tank
High explosive anti-tank warheads are made of an explosive shaped charge that uses the Munroe effect to create a very high-velocity partial stream of metal in a state of superplasticity that can punch through solid armor....
) warheads, designed specifically for penetrating armor. Tandem-charge
Tandem-charge
A tandem-charge weapon is an explosive device or projectile that has two or more stages of detonation. It is effective against cage armor, which is designed to protect an armored vehicle against anti-tank munitions. The first stage of the weapon triggers the reactive armor of the target, limiting...
missiles attempt to defeat ERA protected armor. The small initial charge sets off the ERA while the follow-up main charge attempts to penetrate the main armor. Top-attack weapons such as the Indian Nag, American Javelin and the Swedish Bill are designed to focus the explosion down through an armored fighting vehicle's thinner turret-roof or upper-hull armor.

Countermeasure
Countermeasure
A countermeasure is a measure or action taken to counter or offset another one. As a general concept it implies precision, and is any technological or tactical solution or system designed to prevent an undesirable outcome in the process...
s against ATGMs include spaced, perforated, and composite armour
Composite armour
Composite armour is a type of vehicle armour consisting of layers of different material such as metals, plastics, ceramics or air. Most composite armour are lighter than their all-metal equivalent, but instead occupy a larger volume for the same resistance to penetration...
, explosive reactive armour, jammer
Electronic countermeasures
An electronic countermeasure is an electrical or electronic device designed to trick or deceive radar, sonar or other detection systems, like infrared or lasers. It may be used both offensively and defensively to deny targeting information to an enemy...
s like the Russian Shtora
Shtora
Shtora is an electro-optical active protection system or suite for tanks, designed to disrupt the laser target designation and rangefinders of incoming anti-tank guided missiles...
, and active protection system
Active protection system
An active protection system is a system designed to prevent sensor-based weapons from acquiring and/or destroying a target....
s (APS) like the Israeli Trophy
TROPHY Active Protection System
Trophy is an active protection system , designed to supplement the armor of both light and heavy armored fighting vehicles. It intercepts and destroys incoming missiles and rockets with a shotgun-like blast...
and the Russian Arena
Arena Active Protection System
The Arena is an active protection system developed at Russia's Kolomna-based Engineering Design Bureau for the purpose of protecting armoured fighting vehicles from destruction by light anti-tank weapons, anti-tank guided missiles , and missiles with top attack warheads. It uses a Doppler radar...
. Traditionally, before "fire-and-forget" ATGMs were used, the most effective countermeasure was to open fire at the location where the missile was fired from. Either the operator would be forced to take cover or he would be killed.
The source of this article is wikipedia, the free encyclopedia.  The text of this article is licensed under the GFDL.