Overview
An electronic countermeasure (ECM) is an electrical or electronic device designed to trick or deceive radar
Radar
Radar is an object-detection system which uses radio waves to determine the range, altitude, direction, or speed of objects. It can be used to detect aircraft, ships, spacecraft, guided missiles, motor vehicles, weather formations, and terrain. The radar dish or antenna transmits pulses of radio...
, sonar
Sonar
Sonar is a technique that uses sound propagation to navigate, communicate with or detect other vessels...
or other detection systems, like infrared (IR) or lasers. It may be used both offensively and defensively to deny targeting information to an enemy. The system may make many separate targets appear to the enemy, or make the real target appear to disappear or move about randomly.

What are the different ways of trick and deceive the radar?
More 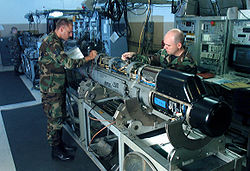 An electronic countermeasure (ECM) is an electrical or electronic device designed to trick or deceive radar
Radar
Radar is an object-detection system which uses radio waves to determine the range, altitude, direction, or speed of objects. It can be used to detect aircraft, ships, spacecraft, guided missiles, motor vehicles, weather formations, and terrain. The radar dish or antenna transmits pulses of radio...
, sonar
Sonar
Sonar is a technique that uses sound propagation to navigate, communicate with or detect other vessels...
or other detection systems, like infrared (IR) or lasers. It may be used both offensively and defensively to deny targeting information to an enemy. The system may make many separate targets appear to the enemy, or make the real target appear to disappear or move about randomly. It is used effectively to protect aircraft
Aircraft
An aircraft is a vehicle that is able to fly by gaining support from the air, or, in general, the atmosphere of a planet. An aircraft counters the force of gravity by using either static lift or by using the dynamic lift of an airfoil, or in a few cases the downward thrust from jet engines.Although...
from guided missile
Guided Missile
Guided Missile is a London based independent record label set up by Paul Kearney in 1994.Guided Missile has always focused on 'the underground', preferring to put out a steady flow of releases and developing the numerous GM events around London and beyond....
s. Most air force
Air force
An air force, also known in some countries as an air army, is in the broadest sense, the national military organization that primarily conducts aerial warfare. More specifically, it is the branch of a nation's armed services that is responsible for aerial warfare as distinct from an army, navy or...
s use ECM to protect their aircraft from attack. It has also been deployed by military ships and recently on some advanced tanks to fool laser/IR guided missiles. It is frequently coupled with stealth advances so that the ECM systems have an easier job. Offensive ECM often takes the form of jamming. Defensive ECM includes using blip enhancement
Blip enhancement
Blip enhancement is an electronic warfare technique used to fool radar. When the radar transmits a burst of energy some of that energy is reflected off a target and is received back at the radar and processed to determine range and angle...
and jamming of missile terminal homers.

One of the first examples of electronic countermeasures being applied in a combat situation took place during the Russo-Japanese war
Russo-Japanese War
The Russo-Japanese War was "the first great war of the 20th century." It grew out of rival imperial ambitions of the Russian Empire and Japanese Empire over Manchuria and Korea...
. On April 15, 1904, Russian wireless telegraphy
Wireless telegraphy
Wireless telegraphy is a historical term used today to apply to early radio telegraph communications techniques and practices, particularly those used during the first three decades of radio before the term radio came into use....
stations installed in the Port Arthur
Lüshunkou
Lüshunkou is a district in the municipality of Dalian, Liaoning province, China. Also called Lüshun City or Lüshun Port, it was formerly known as both Port Arthur and Ryojun....
fortress and on board Russian light cruisers successfully interrupted wireless communication between a group of Japanese battleships. The spark-gap transmitters in the Russian stations generated senseless noise while the Japanese were making attempts to coordinate their efforts in the bombing of a Russian naval base. Germany
Germany
Germany , officially the Federal Republic of Germany , is a federal parliamentary republic in Europe. The country consists of 16 states while the capital and largest city is Berlin. Germany covers an area of 357,021 km2 and has a largely temperate seasonal climate...
and Great Britain
Great Britain
Great Britain or Britain is an island situated to the northwest of Continental Europe. It is the ninth largest island in the world, and the largest European island, as well as the largest of the British Isles...
interfered with enemy communications along the western front during World War I
World War I
World War I , which was predominantly called the World War or the Great War from its occurrence until 1939, and the First World War or World War I thereafter, was a major war centred in Europe that began on 28 July 1914 and lasted until 11 November 1918...
while the Royal Navy
Royal Navy
The Royal Navy is the naval warfare service branch of the British Armed Forces. Founded in the 16th century, it is the oldest service branch and is known as the Senior Service...
tried to intercept German naval radio transmissions. There were also efforts at sending false radio signals, having shore stations send transmissions using ships' call signs, and jamming enemy radio signals.

World War II
World War II
World War II, or the Second World War , was a global conflict lasting from 1939 to 1945, involving most of the world's nations—including all of the great powers—eventually forming two opposing military alliances: the Allies and the Axis...
ECM expanded to include dropping chaff (originally called Window), jamming and spoofing radar and navigation signals. German bomber aircraft navigated using radio signals transmitted from ground stations, which the British disrupted with spoofed signals in the Battle of the Beams
Battle of the beams
The Battle of the Beams was a period early in the Second World War when bombers of the German Air Force used a number of increasingly accurate systems of radio navigation for night bombing. British "scientific intelligence" at the Air Ministry fought back with a variety of increasingly effective...
. During the RAF's night attacks on Germany the extent of electronic countermeasures was much expanded, and a specialised organisation, No. 100 Group RAF
No. 100 Group RAF
No. 100 Group was a special duties group within RAF Bomber Command.It was formed on 11 November 1943 to consolidate the increasingly complex business of electronic warfare and countermeasures within one organisation. The group was responsible for the development, operational trial and use of...
, was formed to counter the increasing German night fighter
Night fighter
A night fighter is a fighter aircraft adapted for use at night or in other times of bad visibility...
force and radar defences. Cold War
Cold War
The Cold War was the continuing state from roughly 1946 to 1991 of political conflict, military tension, proxy wars, and economic competition between the Communist World—primarily the Soviet Union and its satellite states and allies—and the powers of the Western world, primarily the United States...
developments included anti-radiation missile
Anti-radiation missile
An anti-radiation missile is a missile which is designed to detect and home on an enemy radio emission source. Typically these are designed for use against an enemy radar, although jammers and even radios used for communication can also be targeted in this manner.- Air-to-Ground :Most ARM designs...
s designed to home in on enemy radar transmitters.

Basic radar ECM strategies are (1) radar interference, (2) target modifications, and (3) changing the electrical properties of air. Interference techniques include jamming and deception. Jamming is accomplished by a friendly platform transmitting signals on the radar frequency to produce a noise level sufficient to hide echos. The jammer's continuous transmissions will provide a clear direction to the enemy radar, but no range information. Deception may use a transponder to mimic the radar echo with a delay to indicate incorrect range. Transponders may alternatively increase return echo strength to make a small decoy appear to be a larger target. Target modifications include radar absorbing coatings and modifications of the surface shape to either "stealth" a high-value target or enhance reflections from a decoy. Dispersal of small aluminum strips called chaff
Chaff (radar countermeasure)
Chaff, originally called Window by the British, and Düppel by the Second World War era German Luftwaffe , is a radar countermeasure in which aircraft or other targets spread a cloud of small, thin pieces of aluminium, metallized glass fibre or plastic, which either appears as a cluster of secondary...
is a common method of changing the electromagnetic properties of air to provide confusing radar echos. 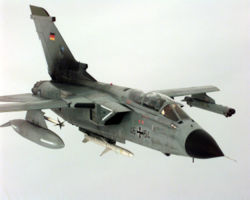 ECM is practiced by nearly all modern military units—land, sea or air. Aircraft, however, are the primary weapons in the ECM battle because they can "see" a larger patch of earth than a sea or land-based unit. When employed effectively, ECM can keep aircraft from being tracked by search radars, or targeted by surface-to-air missile
Surface-to-air missile
A surface-to-air missile or ground-to-air missile is a missile designed to be launched from the ground to destroy aircraft or other missiles...
s or air-to-air missile
Air-to-air missile
An air-to-air missile is a missile fired from an aircraft for the purpose of destroying another aircraft. AAMs are typically powered by one or more rocket motors, usually solid fuelled but sometimes liquid fuelled...
s. On aircraft ECM can take the form of an attachable underwing pod or could be embedded in the airframe. Active Electronically Scanned Array
Active Electronically Scanned Array
An Active Electronically Scanned Array , also known as active phased array radar is a type of phased array radar whose transmitter and receiver functions are composed of numerous small solid-state transmit/receive modules . AESAs aim their "beam" by broadcasting radio energy that interfere...
(AESA) radars like those mounted on the F-22, MiG-35, Su-35BM or the F-35
F-35 Lightning II
The Lockheed Martin F-35 Lightning II is a family of single-seat, single-engine, fifth generation multirole fighters under development to perform ground attack, reconnaissance, and air defense missions with stealth capability...
can also act as an ECM device to track, locate and eventually jam enemy radar. Previous radar types were not capable of performing these activities due to:

The Next Generation Jammer will be carried on the E/A-18G and F-35 fighters and use AESA technologies in side mounted pods to provide all around coverage with highly selective directional jamming.

DARPA's Precision Electronic Warfare (PREW) project aims to combine AESA with Synthetic aperture radar
Synthetic aperture radar
Synthetic-aperture radar is a form of radar whose defining characteristic is its use of relative motion between an antenna and its target region to provide distinctive long-term coherent-signal variations that are exploited to obtain finer spatial resolution than is possible with conventional...
spread over multiple platforms for very tightly focused jamming.

Infrared homing systems can be decoyed with flares. Sound detection and homing systems used for ships are also susceptible to countermeasures. United States
United States
The United States of America is a federal constitutional republic comprising fifty states and a federal district...
warships use Masker and PRAIRIE (PRopellor AIR Ingestion and Emission) systems to create small air bubbles around a ship's hull and wake to reduce sound transmission. Surface ships tow noisemakers like the AN/SLQ-25 Nixie
AN/SLQ-25 Nixie
The AN/SLQ-25 Nixie and its variants are towed torpedo decoys used on US and allied warships. It consists of a towed decoy device and a shipboard signal generator...
to decoy homing torpedoes. Submarines can deploy similar acoustic device countermeasures (or ADCs) from a 3-inch (75-mm) signal launching tube. United States ballistic missile submarines could deploy the Mark 70 MOSS (MObile Submarine Simulator) decoy from torpedo tubes to simulate a full size submarine.