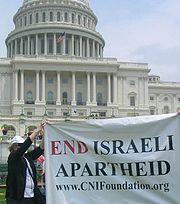 The anti-Israel lobby is a term used by some who criticize those groups and individuals that oppose Israeli policies or United States
United States
The United States of America is a federal constitutional republic comprising fifty states and a federal district...
foreign policy which they consider to be too favorable towards Israel
Israel
The State of Israel is a parliamentary republic located in the Middle East, along the eastern shore of the Mediterranean Sea...
. Those opposed to such policies state that they seek a more "even-handed" U.S. approach to the conflict in the Middle East.

Caroline Glick
Caroline Glick
Caroline Glick is an American-Israeli journalist for Makor Rishon and is the deputy managing editor of The Jerusalem Post. She is also the Senior Fellow for Middle East Affairs of the Washington, D.C.-based Center for Security Policy.-Life:...
, managing editor of The Jerusalem Post
The Jerusalem Post
The Jerusalem Post is an Israeli daily English-language broadsheet newspaper, founded on December 1, 1932 by Gershon Agron as The Palestine Post. The daily readership numbers do not approach those of the major Hebrew newspapers....
, writes in an opinion column that recent years have seen "the emergence of a very committed and powerful anti-Israel lobby in Washington." However, critics of Israel's policies often object to the phrase “anti-Israel” being used in regards to such lobbying.


American Friends of the Middle East

Martin J. Raffel identified the American-Arab Anti-Discrimination Committee
American-Arab Anti-Discrimination Committee
The American-Arab Anti-Discrimination Committee states that it is the largest Arab American grassroots civil rights organization in the United States. According to its web page it is open to people of all backgrounds, faiths and ethnicities and has over 40 chapters in 24 states and members in all...
(ADC) as being part of "The Anti-Israel lobby", hostile to the Jewish-American community in the late 1980s. The Jerusalem-based NGO Monitor
NGO Monitor
NGO Monitor is a non-governmental organization based in Jerusalem, Israel whose stated aim is to generate and distribute critical analysis and reports on the output of the international NGO community for the benefit of government policy makers, journalists, philanthropic organizations and the...
identified it as "very active" in "anti-Israel political causes."


Council for the National Interest

Rafael Medoff
Rafael Medoff
Rafael Medoff is founding director of The David Wyman Institute for Holocaust Studies, which is based in Washington, D.C. and focuses on issues related to America's response to the Holocaust.-Academic career:...
, founding director of The David S. Wyman Institute for Holocaust Studies
David Wyman
David S. Wyman is the author of several books on the responses of the United States to Nazi Germany's persecution of and programs to exterminate Jews....
, labels the Council for the National Interest
Council for the National Interest
The Council for the National Interest is a 501 organization in the United States advocating a "new direction for U.S. Middle East policy." With its sister organization the Council for the National Interest Foundation it works to educate about and promote what it describes as "even handed...
(CNI) as an organization that is part of the "anti-Israel lobby." CNI was founded following former Congressman Paul Findley
Paul Findley
Paul Findley is a former United States Representative from Illinois, representing its 20th District. A Republican, he was first elected in 1961. Findley lost his seat in 1982 to current United States Senator Dick Durbin. Findley attended Illinois College and is a member of Phi Alpha Literary Society...
's 1982 defeat by "pro Israel PAC money." CNI's website states its objective as "seeking to encourage and promote a U.S. foreign policy in the Middle East that is consistent with American values, protects our national interests, and contributes to a just solution of the Arab-Israeli conflict. It is CNI’s goal to restore a political environment in America in which voters and their elected officials are free from the undue influence and pressure of foreign countries and their partisans."

In 2008, The Jerusalem Post
The Jerusalem Post
The Jerusalem Post is an Israeli daily English-language broadsheet newspaper, founded on December 1, 1932 by Gershon Agron as The Palestine Post. The daily readership numbers do not approach those of the major Hebrew newspapers....
wrote that Wikipedia
Wikipedia
Wikipedia is a free, web-based, collaborative, multilingual encyclopedia project supported by the non-profit Wikimedia Foundation. Its 20 million articles have been written collaboratively by volunteers around the world. Almost all of its articles can be edited by anyone with access to the site,...
was "Part anarchy, part mob rule" and that "the 'mob' is the vast anti-Israel lobby that haters of our country have managed to pull together." The article focused on the negative reaction to the Committee for Accuracy in Middle East Reporting's Israeli lobby campaign in Wikipedia.

Caroline Glick wrote that the "anti-Israel Jewish lobby J Street," supported by several other Jewish groups "supports the White House's hostile positions on Israel as ends unto themselves." She also identifies George Soros
George Soros
George Soros is a Hungarian-American business magnate, investor, philosopher, and philanthropist. He is the chairman of Soros Fund Management. Soros supports progressive-liberal causes...
as the individual who "first raised the prospect of a Jewish anti-Israel lobby in October 2006."


Criticism of the term

In 2008, University of Florida political scientist Ken Wald warned that the left leaning pro-Israel lobby group J Street
J Street
J Street is a nonprofit liberal advocacy group based in the United States whose stated aim is to promote American leadership to end the Arab-Israeli and Israel-Palestinian conflicts peacefully and diplomatically. It was founded in April 2008....
"will get hammered and accused of being anti-Israel" by "more conservative pro-Israeli factions." The founder of J Street responded to such criticism of being "anti-Israel" saying that "the most pro-Israel thing any American politician or policy maker can do is help to bring about a two-state solution and a comprehensive peace agreement between Israel and her neighbours."

Barack Obama
Barack Obama
Barack Hussein Obama II is the 44th and current President of the United States. He is the first African American to hold the office. Obama previously served as a United States Senator from Illinois, from January 2005 until he resigned following his victory in the 2008 presidential election.Born in...
, during the 2008 election campaign
United States presidential election, 2008
The United States presidential election of 2008 was the 56th quadrennial presidential election. It was held on November 4, 2008. Democrat Barack Obama, then the junior United States Senator from Illinois, defeated Republican John McCain, the senior U.S. Senator from Arizona. Obama received 365...
, implicitly noted differences within the lobby in his comment that "there is a strain within the pro-Israel community that says, 'unless you adopt an unwavering pro-Likud approach to Israel, that you’re anti-Israel,' and that can’t be the measure of our friendship with Israel." Commentary
Commentary (magazine)
Commentary is a monthly American magazine on politics, Judaism, social and cultural issues. It was founded by the American Jewish Committee in 1945. By 1960 its editor was Norman Podhoretz, a liberal at the time who moved sharply to the right in the 1970s and 1980s becoming a strong voice for the...
magazine notes: "It was an odd choice of words—Likud
Likud
Likud is the major center-right political party in Israel. It was founded in 1973 by Menachem Begin in an alliance with several right-wing and liberal parties. Likud's victory in the 1977 elections was a major turning point in the country's political history, marking the first time the left had...
has not been Israel’s governing party for more than three years—but what Obama clearly meant was that an American politician should not have to express fealty to the most hard-line ideas relating to Israel's security to be considered a supporter of Israel's."