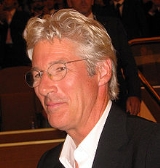 Overview
Richard Tiffany Gere is an American
People of the United States
The people of the United States, also known as simply Americans or American people, are the inhabitants or citizens of the United States. The United States is a multi-ethnic nation, home to people of different ethnic and national backgrounds...
actor. He began acting in the 1970s, playing a supporting role in Looking for Mr. Goodbar
Looking for Mr. Goodbar (film)
Looking for Mr. Goodbar is a 1977 film written for the screen and directed by Richard Brooks and starring Diane Keaton, Tuesday Weld, Richard Gere, and also features Tom Berenger...
, and a starring role in Days of Heaven
Days of Heaven
Days of Heaven is a 1978 American romantic drama film written and directed by Terrence Malick and starring Richard Gere, Brooke Adams, Sam Shepard and Linda Manz. Set in the early 20th century, it tells the story of two poor lovers, Bill and Abby, as they travel to the Texas Panhandle to harvest...
. He came to prominence in 1980 for his role in the film American Gigolo
American Gigolo
American Gigolo is a 1980 crime drama film, written and directed by Paul Schrader. It is informally considered the second installment in his "lonely man" trilogy, following the Martin Scorsese directed Taxi Driver and preceding Light Sleeper .-Plot:Julian Kaye is a male prostitute in Los Angeles...
, which established him as a leading man and a sex symbol. He went on to star in several hit films including An Officer and a Gentleman
An Officer and a Gentleman
A Officer and a Gentleman is a 1982 American drama film that tells the story of a U.S. Navy aviation officer candidate who comes into conflict with the Marine Corps Gunnery Sergeant who trains him. It was written by Douglas Day Stewart and directed by Taylor Hackford...
, Pretty Woman
Pretty Woman
Pretty Woman is a 1990 romantic comedy film set in Los Angeles, California. Written by J.F. Lawton and directed by Garry Marshall, this motion picture features Richard Gere and Julia Roberts, and also Hector Elizondo, Ralph Bellamy, and Jason Alexander in supporting roles. Roberts played the only...
, Primal Fear
Primal Fear (film)
Primal Fear is a 1996 American crime drama thriller film directed by Gregory Hoblit and starring Richard Gere and Edward Norton. The film tells the story of a defense attorney, Martin Vail , who defends an altar boy, Aaron Stampler , charged with the murder of a Catholic archbishop. The movie is an...
, and Chicago
Chicago (2002 film)
Chicago is a 2002 musical film adapted from the satirical stage musical of the same name, exploring the themes of celebrity, scandal, and corruption in Jazz-age Chicago....
, for which he won a Golden Globe Award as Best Actor, as well as a Screen Actors Guild
Screen Actors Guild
The Screen Actors Guild is an American labor union representing over 200,000 film and television principal performers and background performers worldwide...
Award as part of the Best Cast.
Born in Philadelphia, Pennsylvania
Pennsylvania
The Commonwealth of Pennsylvania is a U.S. state that is located in the Northeastern and Mid-Atlantic regions of the United States. The state borders Delaware and Maryland to the south, West Virginia to the southwest, Ohio to the west, New York and Ontario, Canada, to the north, and New Jersey to...
, Gere is a descendant of Mayflower
Mayflower
The Mayflower was the ship that transported the English Separatists, better known as the Pilgrims, from a site near the Mayflower Steps in Plymouth, England, to Plymouth, Massachusetts, , in 1620...
Pilgrims Francis Eaton
Francis Eaton
Francis Eaton was a passenger on the Mayflower and also a signer of the Mayflower Compact. He traveled from England with his first wife, Sarah, and their "sucking" child, Samuel...
, John Billington
John Billington
John Billington was an Englishman who was convicted of murder in what would become the United States, and the first to be hanged for any crime in New England. Billington was also a signer of the Mayflower Compact....
, George Soule
George Soule
George Soule was a signer of the Mayflower Compact, and one of the original 102 Pilgrims who arrived on the Mayflower to Plymouth, Massachusetts in 1620.-Biography:...
, Richard Warren
Richard Warren
Richard Warren was a passenger on the Mayflower in 1620. He settled in Plymouth Colony and was among ten passengers of the Mayflower landing party with Myles Standish at Cape Cod on November 11, 1620...
, Degory Priest
Degory Priest
Degory Priest was a signer of the Mayflower Compact, and one of the original 102 Pilgrims who arrived on the Mayflower to Plymouth, Massachusetts in 1620. Alternate spellings of his name were: "Digory" "Gregory", "Degorie", or "Digorie" Priest.Little information remains regarding Degory Priest's...
, William Brewster
William Brewster (Pilgrim)
Elder William Brewster was a Mayflower passenger and a Pilgrim colonist leader and preacher.-Origins:Brewster was probably born at Doncaster, Yorkshire, England, circa 1566/1567, although no birth records have been found, and died at Plymouth, Massachusetts on April 10, 1644 around 9- or 10pm...
and Francis Cooke
Francis Cooke
Francis Cooke was one of the 102 passengers on the Mayflower. This early settler is one of the twenty-six male Pilgrims known to have descendants.- Early life and family :...
.