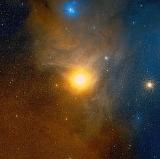 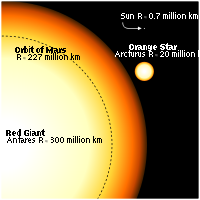 Antares is a class M
Stellar classification
In astronomy, stellar classification is a classification of stars based on their spectral characteristics. The spectral class of a star is a designated class of a star describing the ionization of its chromosphere, what atomic excitations are most prominent in the light, giving an objective measure...
supergiant star, with a radius of approximately 800 times that of the sun; if it were placed in the center of our solar system, its outer surface would lie between the orbits of Mars and Jupiter. Antares is approximately 600 ly from our solar system. Its visual luminosity
Luminosity
Luminosity is a measurement of brightness.-In photometry and color imaging:In photometry, luminosity is sometimes incorrectly used to refer to luminance, which is the density of luminous intensity in a given direction. The SI unit for luminance is candela per square metre.The luminosity function...
is about 10,000 times that of the Sun
Sun
The Sun is the star at the center of the Solar System. It is almost perfectly spherical and consists of hot plasma interwoven with magnetic fields...
, but because the star radiates a considerable part of its energy in the infrared
Infrared
Infrared light is electromagnetic radiation with a wavelength longer than that of visible light, measured from the nominal edge of visible red light at 0.74 micrometres , and extending conventionally to 300 µm...
part of the spectrum
Spectrum
A spectrum is a condition that is not limited to a specific set of values but can vary infinitely within a continuum. The word saw its first scientific use within the field of optics to describe the rainbow of colors in visible light when separated using a prism; it has since been applied by...
, the bolometric
Bolometer
A bolometer is a device for measuring the power of incident electromagnetic radiation via the heating of a material with a temperature-dependent electrical resistance. It was invented in 1878 by the American astronomer Samuel Pierpont Langley...
luminosity equals roughly 65,000 times that of the Sun. The mass of the star is calculated to be 15 to 18 solar mass
Solar mass
The solar mass , , is a standard unit of mass in astronomy, used to indicate the masses of other stars and galaxies...
es. Its large size and relatively small mass give Antares a very low average density.

The size of Antares may be calculated using its parallax and angular diameter. The parallax angle is given in the box to the right, and the angular diameter is known from lunar occultation measurements (41.3 ± 0.1 mas). This leads to a radius of 822 ± 80 solar radii.

The best time to view Antares is on or around May 31 of each year, when the star is at opposition to the Sun
Sun
The Sun is the star at the center of the Solar System. It is almost perfectly spherical and consists of hot plasma interwoven with magnetic fields...
. At this time, Antares rises at dusk and sets at dawn, and is thus in view all night. For approximately two to three weeks on either side of November 30, Antares is not visible in the night sky, being lost in the Sun's glare; this period of invisibility is longer in the Northern Hemisphere
Northern Hemisphere
The Northern Hemisphere is the half of a planet that is north of its equator—the word hemisphere literally means “half sphere”. It is also that half of the celestial sphere north of the celestial equator...
than in the Southern Hemisphere
Southern Hemisphere
The Southern Hemisphere is the part of Earth that lies south of the equator. The word hemisphere literally means 'half ball' or "half sphere"...
, since the star's declination
Declination
In astronomy, declination is one of the two coordinates of the equatorial coordinate system, the other being either right ascension or hour angle. Declination in astronomy is comparable to geographic latitude, but projected onto the celestial sphere. Declination is measured in degrees north and...
is significantly south of the celestial equator.

Antares has a hot blue companion star, Antares B, of spectral type B2.5 at a separation of about 2.9 arcseconds, or 550 AUs
Astronomical unit
An astronomical unit is a unit of length equal to about or approximately the mean Earth–Sun distance....
at Antares' estimated distance. At magnitude 5.5, it is only 1/370th as bright visually as Antares A, although it shines with 170 times the Sun's luminosity. It is normally difficult to see in small telescopes due to Antares' glare, but can sometimes be seen in apertures over 150 mm (5.9 in). The companion is often described as green, but this is probably a contrast effect. Antares B can be observed with a small telescope
Telescope
A telescope is an instrument that aids in the observation of remote objects by collecting electromagnetic radiation . The first known practical telescopes were invented in the Netherlands at the beginning of the 1600s , using glass lenses...
for a few seconds during lunar occultation
Occultation
An occultation is an event that occurs when one object is hidden by another object that passes between it and the observer. The word is used in astronomy . It can also refer to any situation wherein an object in the foreground blocks from view an object in the background...
s while Antares itself is hidden by the Moon
Moon
The Moon is Earth's only known natural satellite,There are a number of near-Earth asteroids including 3753 Cruithne that are co-orbital with Earth: their orbits bring them close to Earth for periods of time but then alter in the long term . These are quasi-satellites and not true moons. For more...
; it was discovered by Johann Tobias Bürg
Johann Tobias Bürg
Johann Tobias Bürg was an Austrian astronomer.Born in Vienna, Bürg worked as a professor and astronomer in Klagenfurt, in Carinthia. He subsequently worked as astronomical assistant at the observatory at Vienna from 1792 until he retired in 1813.He published some astronomical tables on the Moon...
during one such occultation on April 13, 1819.

The orbit is poorly known, with an estimated period
Orbital period
The orbital period is the time taken for a given object to make one complete orbit about another object.When mentioned without further qualification in astronomy this refers to the sidereal period of an astronomical object, which is calculated with respect to the stars.There are several kinds of...
of 878 years.


Position on the ecliptic

Antares is one of the 4 first magnitude stars that lies within 5° of the ecliptic and therefore can be occulted
Occultation
An occultation is an event that occurs when one object is hidden by another object that passes between it and the observer. The word is used in astronomy . It can also refer to any situation wherein an object in the foreground blocks from view an object in the background...
by the Moon and rarely by the planets. On 31 July 2009, Antares was occulted by the moon. The event was visible in much of southern Asia and the Middle East. Every year around December 2 the Sun passes 5° north of Antares.

Antares, the proper name of this star, derives from the Ancient Greek
Ancient Greek
Ancient Greek is the stage of the Greek language in the periods spanning the times c. 9th–6th centuries BC, , c. 5th–4th centuries BC , and the c. 3rd century BC – 6th century AD of ancient Greece and the ancient world; being predated in the 2nd millennium BC by Mycenaean Greek...
, meaning "(holds) against Ares
Ares
Ares is the Greek god of war. He is one of the Twelve Olympians, and the son of Zeus and Hera. In Greek literature, he often represents the physical or violent aspect of war, in contrast to the armored Athena, whose functions as a goddess of intelligence include military strategy and...
(Mars)", due to the similarity of its red
Red
Red is any of a number of similar colors evoked by light consisting predominantly of the longest wavelengths of light discernible by the human eye, in the wavelength range of roughly 630–740 nm. Longer wavelengths than this are called infrared , and cannot be seen by the naked eye...
dish hue to the appearance of the planet Mars
Mars
Mars is the fourth planet from the Sun in the Solar System. The planet is named after the Roman god of war, Mars. It is often described as the "Red Planet", as the iron oxide prevalent on its surface gives it a reddish appearance...
. It is the brightest star in the constellation
Constellation
In modern astronomy, a constellation is an internationally defined area of the celestial sphere. These areas are grouped around asterisms, patterns formed by prominent stars within apparent proximity to one another on Earth's night sky....
Scorpius
Scorpius
Scorpius, sometimes known as Scorpio, is one of the constellations of the zodiac. Its name is Latin for scorpion, and its symbol is . It lies between Libra to the west and Sagittarius to the east...
. However, it is also thought that Antares may have been named after the ancient Arab warrior-poet Antar
Antarah ibn Shaddad
'Antarah Ibn Shaddād al-'Absī عنترة بن شداد العبسي was a pre-Islamic Arabian hero and poet famous both for his poetry and his adventurous life. What many consider his best or chief poem is contained in the Mu'allaqat...
.
Its distinctive color has made the star an object of interest to many societies throughout history.

Alternative name of this star, meaning "the Heart of Scorpion":