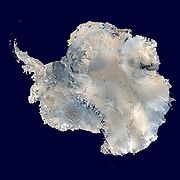 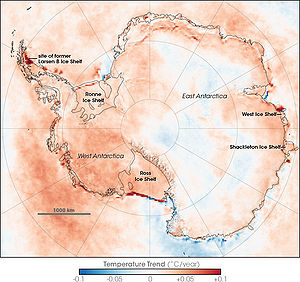 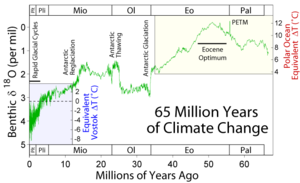 The Antarctic ice sheet is one of the two polar ice caps of the Earth
Earth
Earth is the third planet from the Sun, and the densest and fifth-largest of the eight planets in the Solar System. It is also the largest of the Solar System's four terrestrial planets...
. It covers about 98% of the Antarctic continent
Continent
A continent is one of several very large landmasses on Earth. They are generally identified by convention rather than any strict criteria, with seven regions commonly regarded as continents—they are : Asia, Africa, North America, South America, Antarctica, Europe, and Australia.Plate tectonics is...
and is the largest single mass of ice
Ice
Ice is water frozen into the solid state. Usually ice is the phase known as ice Ih, which is the most abundant of the varying solid phases on the Earth's surface. It can appear transparent or opaque bluish-white color, depending on the presence of impurities or air inclusions...
on Earth. It covers an area of almost 14 million square km and contains 30 million cubic km of ice. That is, approximately 61 percent of all fresh water
Fresh Water
Fresh Water is the debut album by Australian rock and blues singer Alison McCallum, released in 1972. Rare for an Australian artist at the time, it came in a gatefold sleeve...
on the Earth is held in the Antarctic ice sheet, an amount equivalent to 70 m of water in the world's oceans. In East Antarctica
East Antarctica
East Antarctica, also called Greater Antarctica, constitutes the majority of the Antarctic continent, lying on the Indian Ocean side of the Transantarctic Mountains...
, the ice sheet rests on a major land mass, but in West Antarctica
West Antarctica
West Antarctica, or Lesser Antarctica, one of the two major regions of Antarctica, is the part of the continent that lies within the Western Hemisphere including the Antarctic Peninsula.-Location and description:...
the bed can extend to more than 2,500 m below sea level. The land in this area would be seabed if the ice sheet were not there.

The icing of Antarctica began with ice-rafting from middle Eocene
Eocene
The Eocene Epoch, lasting from about 56 to 34 million years ago , is a major division of the geologic timescale and the second epoch of the Paleogene Period in the Cenozoic Era. The Eocene spans the time from the end of the Palaeocene Epoch to the beginning of the Oligocene Epoch. The start of the...
times about 45.5 million years ago and escalated inland widely during the Eocene-Oligocene extinction event
Eocene-Oligocene extinction event
The transition between the end of the Eocene and the beginning of the Oligocene, called the Grande Coupure in Europe, occurring 33.9 ± 0.1 Ma, is marked by large-scale extinction and floral and faunal turnover .Most of the affected organisms were marine or aquatic in nature...
about 34 million years ago. CO2 levels were then about 760 ppm and had been decreasing from earlier levels in the thousands of ppm. The glaciation was favored by an interval when the Earth's orbit favored cool summers but Oxygen isotope ratio cycle
Oxygen isotope ratio cycle
Oxygen isotope ratio cycles are cyclical variations in the ratio of the abundance of oxygen with an atomic mass of 18 to the abundance of oxygen with an atomic mass of 16 present in some substances, such as polar ice or calcite in ocean core samples. The ratio is linked to water temperature of...
marker changes were too large to be explained by Antarctic ice-sheet growth alone indicating an ice age
Ice age
An ice age or, more precisely, glacial age, is a generic geological period of long-term reduction in the temperature of the Earth's surface and atmosphere, resulting in the presence or expansion of continental ice sheets, polar ice sheets and alpine glaciers...
of some size. The opening of the Drake Passage
Drake Passage
The Drake Passage or Mar de Hoces—Sea of Hoces—is the body of water between the southern tip of South America at Cape Horn, Chile and the South Shetland Islands of Antarctica...
may have played a role as well though models of the changes suggest declining CO2 levels to have been more important.

Ice enters the sheet through precipitation as snow. This snow is then compacted to form glacier ice which moves under gravity towards the coast. Most of it is carried to the coast by fast moving ice stream
Ice stream
An ice stream is a region of an ice sheet that moves significantly faster than the surrounding ice. Ice streams are a type of glacier. They are significant features of the Antarctic where they account for 10% of the volume of the ice...
s. The ice then passes into the ocean, often forming vast floating ice shelves. These shelves then melt or calve
Ice calving
Ice calving, also known as glacier calving or iceberg calving, is a form of ice ablation or ice disruption. It is the sudden release and breaking away of a mass of ice from a glacier, iceberg, ice front, ice shelf, or crevasse...
off to give iceberg
Iceberg
An iceberg is a large piece of ice from freshwater that has broken off from a snow-formed glacier or ice shelf and is floating in open water. It may subsequently become frozen into pack ice...
s that eventually melt.

If the transfer of the ice from the land to the sea is balanced by snow falling back on the land then there will be no net contribution to global sea levels. A 2002 analysis of NASA
NASA
The National Aeronautics and Space Administration is the agency of the United States government that is responsible for the nation's civilian space program and for aeronautics and aerospace research...
satellite data from 1979–1999 showed that while overall the land ice is decreasing, areas of Antarctica where sea ice was increasing outnumbered areas of decreasing sea ice roughly 2:1. The general trend shows that a warming climate in the southern hemisphere would transport more moisture to Antarctica, causing the interior ice sheets to grow, while calving events along the coast will increase, causing these areas to shrink. A 2006 paper derived from satellite data, measures changes in the gravity
Gravity Recovery and Climate Experiment
The Gravity Recovery And Climate Experiment , a joint mission of NASA and the German Space Agency, has been making detailed measurements of Earth's gravity field since its launch in March 2002....
of the ice mass, suggests that the total amount of ice in Antarctica has begun decreasing in the past few years. Another recent study compared the ice leaving the ice sheet, by measuring the ice velocity and thickness along the coast, to the amount of snow accumulation over the continent. This found that the East Antarctic Ice Sheet
East Antarctic Ice Sheet
The East Antarctic Ice Sheet is one of two large ice sheets in Antarctica, and the largest on the entire planet. The EAIS lies between 45° West and 168° East longitudinally....
was in balance but the West Antarctic Ice Sheet
West Antarctic Ice Sheet
The West Antarctic Ice Sheet is the segment of the continental ice sheet that covers West Antarctica, the portion of Antarctica on the side of the Transantarctic Mountains which lies in the Western Hemisphere. The WAIS is classified as a marine-based ice sheet, meaning that its bed lies well...
was losing mass. This was largely due to acceleration of ice stream
Ice stream
An ice stream is a region of an ice sheet that moves significantly faster than the surrounding ice. Ice streams are a type of glacier. They are significant features of the Antarctic where they account for 10% of the volume of the ice...
s such as Pine Island Glacier
Pine Island Glacier
- Ice sheet drainage :The Antarctic ice sheet is the largest mass of ice on earth, containing a volume of water equivalent to of global sea level. The ice sheet forms from snow which falls onto the continent and compacts under its own weight. The ice then moves under its own weight toward the...
. These results agree closely with the gravity changes.

According to a 2009 study, the continent-wide average surface temperature trend of Antarctica is positive and significant at >0.05°C/decade since 1957.
West Antarctica has warmed by more than 0.1°C/decade in the last 50 years, and this warming is strongest in winter and spring. Although this is partly offset by fall cooling in East Antarctica, this effect is restricted to the 1980s and 1990s.

Antarctic sea ice anomalies have roughly followed the pattern of warming, with the greatest declines occurring off the coast of West Antarctica. East Antarctica sea ice has been increasing since 1978, though not at a statistically significant rate. The atmospheric warming has been directly linked to the recent mass losses in West Antarctica
West Antarctica
West Antarctica, or Lesser Antarctica, one of the two major regions of Antarctica, is the part of the continent that lies within the Western Hemisphere including the Antarctic Peninsula.-Location and description:...
. This mass loss is more likely to be due to increased melting of the ice shelves because of changes in ocean circulation patterns (which themselves may be linked to atmospheric circulation changes that may also explain the warming trends in West Antarctica). Melting of the ice shelves in turn causes the ice streams to speed up. The melting and disappearance of the floating ice shelves will only have a small effect on sea level, which is due to salinity differences. The most important consequence of their increased melting is the speed up of the ice streams on land which are buttressed by these ice shelves.