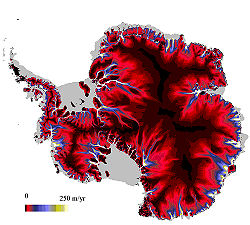 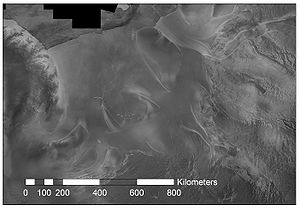 An ice stream is a region of an ice sheet
Ice sheet
An ice sheet is a mass of glacier ice that covers surrounding terrain and is greater than 50,000 km² , thus also known as continental glacier...
that moves significantly faster than the surrounding ice
Ice
Ice is water frozen into the solid state. Usually ice is the phase known as ice Ih, which is the most abundant of the varying solid phases on the Earth's surface. It can appear transparent or opaque bluish-white color, depending on the presence of impurities or air inclusions...
. Ice streams are a type of glacier
Glacier
A glacier is a large persistent body of ice that forms where the accumulation of snow exceeds its ablation over many years, often centuries. At least 0.1 km² in area and 50 m thick, but often much larger, a glacier slowly deforms and flows due to stresses induced by its weight...
. They are significant features of the Antarctic
Antarctic
The Antarctic is the region around the Earth's South Pole, opposite the Arctic region around the North Pole. The Antarctic comprises the continent of Antarctica and the ice shelves, waters and island territories in the Southern Ocean situated south of the Antarctic Convergence...
where they account for 10% of the volume of the ice. They are up to 50 km wide, 2 km thick, can stretch for hundreds of kilometres, and account for most of the ice leaving the ice sheet.

The speed of an ice stream can be over 1,000 metres per year, an order of magnitude faster than the surrounding ice. The shear forces at the edge of the ice stream cause deformation and recrystallization
Crystal
A crystal or crystalline solid is a solid material whose constituent atoms, molecules, or ions are arranged in an orderly repeating pattern extending in all three spatial dimensions. The scientific study of crystals and crystal formation is known as crystallography...
of the ice, making it softer, and concentrating the deformation in narrow bands or shear margins. Crevasse
Crevasse
A crevasse is a deep crack in an ice sheet rhys glacier . Crevasses form as a result of the movement and resulting stress associated with the sheer stress generated when two semi-rigid pieces above a plastic substrate have different rates of movement...
s form, particularly around the shear margins.

Most ice streams have some water at their base, which lubricates the flow. The type of bedrock
Bedrock
In stratigraphy, bedrock is the native consolidated rock underlying the surface of a terrestrial planet, usually the Earth. Above the bedrock is usually an area of broken and weathered unconsolidated rock in the basal subsoil...
also is significant. Soft, deformable sediment
Sediment
Sediment is naturally occurring material that is broken down by processes of weathering and erosion, and is subsequently transported by the action of fluids such as wind, water, or ice, and/or by the force of gravity acting on the particle itself....
s result in faster flow than hard rock.

The Antarctic Ice Sheet
Antarctic ice sheet
The Antarctic ice sheet is one of the two polar ice caps of the Earth. It covers about 98% of the Antarctic continent and is the largest single mass of ice on Earth. It covers an area of almost 14 million square km and contains 30 million cubic km of ice...
is drained to the sea by several ice streams. The largest in East Antarctica
East Antarctica
East Antarctica, also called Greater Antarctica, constitutes the majority of the Antarctic continent, lying on the Indian Ocean side of the Transantarctic Mountains...
is Lambert Glacier
Lambert Glacier
Lambert Glacier is a major glacier in East Antarctica. At about 60 miles wide, over 250 miles long, and about 2,500 meters deep, it holds the Guinness world record for the world's largest glacier...
. In West Antarctica
West Antarctica
West Antarctica, or Lesser Antarctica, one of the two major regions of Antarctica, is the part of the continent that lies within the Western Hemisphere including the Antarctic Peninsula.-Location and description:...
the large Pine Island
Pine Island Glacier
- Ice sheet drainage :The Antarctic ice sheet is the largest mass of ice on earth, containing a volume of water equivalent to of global sea level. The ice sheet forms from snow which falls onto the continent and compacts under its own weight. The ice then moves under its own weight toward the...
and Thwaites
Thwaites Glacier
Thwaites Glacier is an unusually broad and fast Antarctic glacier flowing into Pine Island Bay, part of the Amundsen Sea, east of Mount Murphy, on the Walgreen Coast of Marie Byrd Land. Its surface speeds exceed 2 km/yr near its grounding line, and its fastest flowing grounded ice is centred...
Glaciers are currently the most out of balance, with a total net mass loss between them of 85 gigatonnes per year measured in 2006.

It has been suggested that the Antarctic ice sheet is losing mass. The past and ongoing acceleration of ice streams and outlet glaciers is considered to be a significant, if not the dominant cause of this recent imbalance.

Ice streams that drain the Greenland ice sheet
Greenland ice sheet
The Greenland ice sheet is a vast body of ice covering , roughly 80% of the surface of Greenland. It is the second largest ice body in the world, after the Antarctic Ice Sheet. The ice sheet is almost long in a north-south direction, and its greatest width is at a latitude of 77°N, near its...
into the sea include Helheim Glacier
Helheim Glacier
Helheim Glacier is one of Greenland's largest outlet glaciers. It accelerated from per year in 2000 to per year in 2005. Like many of Greenland's outlet glaciers it is the site of glacial earthquakes.-External links:...
, Jakobshavn Isbræ
Jakobshavn Isbræ
Jakobshavn Isbræ, also known as the Jakobshavn Glacier and Sermeq Kujalleq is a large outlet glacier in West Greenland. It is located near the Greenlandic town of Ilulissat and ends at the sea in the Ilulissat Icefjord....
and Kangerdlugssuaq Glacier
Kangerdlugssuaq Glacier
Kangerdlugssuaq Glacier is the largest glacier on the east coast of the Greenland ice sheet. It flows into the Denmark Strait.-External links:...
.