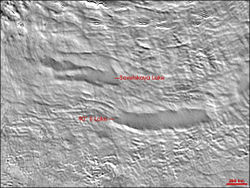 A subglacial lake is a lake
Lake
A lake is a body of relatively still fresh or salt water of considerable size, localized in a basin, that is surrounded by land. Lakes are inland and not part of the ocean and therefore are distinct from lagoons, and are larger and deeper than ponds. Lakes can be contrasted with rivers or streams,...
under a glacier
Glacier
A glacier is a large persistent body of ice that forms where the accumulation of snow exceeds its ablation over many years, often centuries. At least 0.1 km² in area and 50 m thick, but often much larger, a glacier slowly deforms and flows due to stresses induced by its weight...
, typically an ice cap
Ice cap
An ice cap is an ice mass that covers less than 50 000 km² of land area . Masses of ice covering more than 50 000 km² are termed an ice sheet....
or ice sheet
Ice sheet
An ice sheet is a mass of glacier ice that covers surrounding terrain and is greater than 50,000 km² , thus also known as continental glacier...
. There are many such lakes, with Lake Vostok
Lake Vostok
Lake Vostok is the largest of more than 140 subglacial lakes found under the surface of Antarctica. The overlying ice provides a continuous paleoclimatic record of 400,000 years, although the lake water itself may have been isolated for 15 to 25 million years. The lake is named after the...
in Antarctica being by far the largest known at present.

The water in the lake can have a floating level much above the level of the ground threshold. In fact, theoretically a sub-glacial lake can even exist on the top of a hill, provided that the ice over it is so much thinner that it creates the required hydrostatic seal.

The floating level can be thought of as the water level in a hole drilled through the ice into the lake. It is equivalent to the level at which a piece of the ice over it would float if it were a normal ice shelf
Ice shelf
An ice shelf is a thick, floating platform of ice that forms where a glacier or ice sheet flows down to a coastline and onto the ocean surface. Ice shelves are only found in Antarctica, Greenland and Canada. The boundary between the floating ice shelf and the grounded ice that feeds it is called...
. The ceiling can therefore be conceived as an ice shelf that is grounded along its entire perimeter, which explains why it has been called a captured ice shelf. As it moves over the lake, it enters the lake at the floating line, and it leaves the lake at the grounding line.

For the lake to exist there must be a hydrostatic seal along the entire perimeter, if the floating level is higher than the threshold. A hydrostatic seal is created when the ice is so much higher around the lake that the equipotential
Equipotential
Equipotential or isopotential in mathematics and physics refers to a region in space where every point in it is at the same potential. This usually refers to a scalar potential , although it can also be applied to vector potentials...
surface dips down into impermeable ground. Water from underneath this ice rim is then pressed back into the lake by the hydrostatic seal. The ice surface is ten times more important than the bed surface in creating the hydrostatic seal. This means that a 1 m rise in the ice surface at the ice rim is as efficient as a 10 m rise in the bed level below it. In Lake Vostok
Lake Vostok
Lake Vostok is the largest of more than 140 subglacial lakes found under the surface of Antarctica. The overlying ice provides a continuous paleoclimatic record of 400,000 years, although the lake water itself may have been isolated for 15 to 25 million years. The lake is named after the...
the ice rim has been estimated to a mere 7 m, while the floating level is about 3 km above the lake ceiling.

If the hydrostatic seal is penetrated when the floating level is high, the water will start flowing out in a jökulhlaup
Jökulhlaup
A jökulhlaup is a glacial outburst flood. It is an Icelandic term that has been adopted by the English language. It originally referred to the well-known subglacial outburst floods from Vatnajökull, Iceland which are triggered by geothermal heating and occasionally by a volcanic subglacial...
. Due to melting of the channel the discharge
Discharge (hydrology)
In hydrology, discharge is the volume rate of water flow, including any suspended solids , dissolved chemical species and/or biologic material , which is transported through a given cross-sectional area...
increases exponentially, unless other processes allow the discharge to increase even faster. Due to the high head that can be achieved in subglacial lakes, jökulhlaups may reach very high rates of discharge.

Subglacial lakes in Antarctica were first suggested by Oswald and Robin (1973) and subsequently confirmed theoretically by Oswald (1975). They are identified in radio-echo sounding data as continuous and specular reflectors which dip against the ice surface at around x10 of the surface slope angle, as this is requirement for hydrostatic stability. The largest lakes are clustered in the Dome C-Vostok area of East Antarctica - possibly due to the thick insulating ice and rugged tectonically influenced subglacial topography. The largest is Lake Vostok with other lakes notable for their size being Lake Concordia and Aurora Lake.

The role of subglacial lakes on ice dynamics is unclear - certainly on the Greenland Ice Sheet subglacial water acts to enhance basal ice motion in a complex manner (e.g. Zwally et al. 2002). The "Recovery Lakes" lie at the head of a major ice stream and may influence the dynamics of the region (Bell et al. 2007). A modest (10%) speed up of Byrd Glacier may have been influenced by a subglacial drainage event (Stearns et al. 2008). The flow of subglacial water is known in downstream areas where ice streams are known to migrate, accelerate or stagnate on centennial time scales and highlights that subglacial water may be discharged over the ice sheet grounding line (Fricker and Scambos 2009).

There is also evidence that there are subglacial lakes on Jupiter
Jupiter
Jupiter is the fifth planet from the Sun and the largest planet within the Solar System. It is a gas giant with mass one-thousandth that of the Sun but is two and a half times the mass of all the other planets in our Solar System combined. Jupiter is classified as a gas giant along with Saturn,...
's moon
Natural satellite
A natural satellite or moon is a celestial body that orbits a planet or smaller body, which is called its primary. The two terms are used synonymously for non-artificial satellites of planets, of dwarf planets, and of minor planets....
Europa
Europa (moon)
Europa Slightly smaller than Earth's Moon, Europa is primarily made of silicate rock and probably has an iron core. It has a tenuous atmosphere composed primarily of oxygen. Its surface is composed of ice and is one of the smoothest in the Solar System. This surface is striated by cracks and...
. Not all lakes with perennial ice cover can be called sub-glacial, though, since there are also those that are covered by regular lake ice. A criterion for glacial ice is that it is flowing. Ice needs to be approximately thirty metres thick to start flowing, so frozen-over lakes are unlikely ever to transform themselves into subglacial lakes.