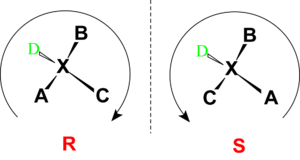 An absolute configuration in stereochemistry
Stereochemistry
Stereochemistry, a subdiscipline of chemistry, involves the study of the relative spatial arrangement of atoms within molecules. An important branch of stereochemistry is the study of chiral molecules....
is the spatial arrangement of the atom
Atom
The atom is a basic unit of matter that consists of a dense central nucleus surrounded by a cloud of negatively charged electrons. The atomic nucleus contains a mix of positively charged protons and electrically neutral neutrons...
s of a chiral
Chirality (chemistry)
A chiral molecule is a type of molecule that lacks an internal plane of symmetry and thus has a non-superimposable mirror image. The feature that is most often the cause of chirality in molecules is the presence of an asymmetric carbon atom....
molecular entity
Molecular entity
According to the IUPAC Gold Book a molecular entity is "any constitutionally or isotopically distinct atom, molecule, ion, ion pair, radical, radical ion, complex, conformer, etc., identifiable as a separately distinguishable entity"....
(or group) and its stereochemical description e.g. R or S.

Absolute configurations are also relevant to characterization of crystal
Crystal
A crystal or crystalline solid is a solid material whose constituent atoms, molecules, or ions are arranged in an orderly repeating pattern extending in all three spatial dimensions. The scientific study of crystals and crystal formation is known as crystallography...
s.

Until 1951 it was not possible to obtain the absolute configuration of chiral compounds. It was at some time decided that (+)-glyceraldehyde
Glyceraldehyde
Glyceraldehyde is a triose monosaccharide with chemical formula C3H6O3. It is the simplest of all common aldoses. It is a sweet, colorless, crystalline solid that is an intermediate compound in carbohydrate metabolism...
was the (R)-enantiomer. The configuration of other chiral compounds was then related to that of (+)-glyceraldehyde by sequences of chemical reaction
Chemical reaction
A chemical reaction is a process that leads to the transformation of one set of chemical substances to another. Chemical reactions can be either spontaneous, requiring no input of energy, or non-spontaneous, typically following the input of some type of energy, such as heat, light or electricity...
s. For example (+)-glyceraldehyde (1) was related to (-)-glyceric acid
Glyceric acid
Glyceric acid is a natural three-carbon sugar acid. Salts and esters of glyceric acid are known as glycerates.Biochemistry=Several phosphate derivatives of glyceric acid, including 2-phosphoglyceric acid, 3-phosphoglyceric acid, 2,3-bisphosphoglyceric acid, and 1,3-bisphosphoglyceric acid, are...
2 (oxidation by mercury oxide
Mercury oxide
Mercury oxide can refer to:* Mercury oxide , Hg2O* Mercury oxide , HgO...
) which in turn was related to (+)-isoserine 3 (nitric acid
Nitric acid
Nitric acid , also known as aqua fortis and spirit of nitre, is a highly corrosive and toxic strong acid.Colorless when pure, older samples tend to acquire a yellow cast due to the accumulation of oxides of nitrogen. If the solution contains more than 86% nitric acid, it is referred to as fuming...
oxidation) and bromide 4 and (-)-lactic acid
Lactic acid
Lactic acid, also known as milk acid, is a chemical compound that plays a role in various biochemical processes and was first isolated in 1780 by the Swedish chemist Carl Wilhelm Scheele. Lactic acid is a carboxylic acid with the chemical formula C3H6O3...
5 (zinc
Zinc
Zinc , or spelter , is a metallic chemical element; it has the symbol Zn and atomic number 30. It is the first element in group 12 of the periodic table. Zinc is, in some respects, chemically similar to magnesium, because its ion is of similar size and its only common oxidation state is +2...
reduction). Because the chemical transformations did not affect the asymmetric carbon atom, this sequence demonstrated that (-)-lactic acid was also a (R)-enantiomer.


In 1951 Bijvoet
Johannes Martin Bijvoet
Johannes Martin Bijvoet was a Dutch chemist and crystallographer at the van 't Hoff Laboratory at the University of Utrecht...
for the first time used in X-ray crystallography
X-ray crystallography
X-ray crystallography is a method of determining the arrangement of atoms within a crystal, in which a beam of X-rays strikes a crystal and causes the beam of light to spread into many specific directions. From the angles and intensities of these diffracted beams, a crystallographer can produce a...
the effect of anomalous dispersion, which is now referred to as resonant scattering, to determine absolute configuration. The compound investigated was (+)-sodium rubidium tartrate
Tartrate
A tartrate is a salt or ester of the organic compound tartaric acid, a dicarboxylic acid. Its formula is O−OC-CH-CH-COO− or C4H4O62−.As food additives, tartrates are used as antioxidants, acidity regulators, and emulsifiers...
and from its configuration (R,R) it was deduced that the original guess for (+)-glyceraldehyde was correct.
The source of this article is wikipedia, the free encyclopedia.  The text of this article is licensed under the GFDL.