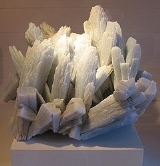 Encyclopedia
Anhydrite is a mineral – anhydrous calcium sulfate
Calcium sulfate
Calcium sulfate is a common laboratory and industrial chemical. In the form of γ-anhydrite , it is used as a desiccant. It is also used as a coagulant in products like tofu. In the natural state, unrefined calcium sulfate is a translucent, crystalline white rock...
, CaSO4. It is in the orthorhombic crystal system, with three directions of perfect cleavage
Cleavage (crystal)
Cleavage, in mineralogy, is the tendency of crystalline materials to split along definite crystallographic structural planes. These planes of relative weakness are a result of the regular locations of atoms and ions in the crystal, which create smooth repeating surfaces that are visible both in the...
parallel to the three planes of symmetry
Symmetry
Symmetry generally conveys two primary meanings. The first is an imprecise sense of harmonious or aesthetically pleasing proportionality and balance; such that it reflects beauty or perfection...
. It is not isomorphous with the orthorhombic barium
Barium
Barium is a chemical element with the symbol Ba and atomic number 56. It is the fifth element in Group 2, a soft silvery metallic alkaline earth metal. Barium is never found in nature in its pure form due to its reactivity with air. Its oxide is historically known as baryta but it reacts with...
(baryte) and strontium
Strontium
Strontium is a chemical element with the symbol Sr and the atomic number 38. An alkaline earth metal, strontium is a soft silver-white or yellowish metallic element that is highly reactive chemically. The metal turns yellow when exposed to air. It occurs naturally in the minerals celestine and...
(celestine) sulfates, as might be expected from the chemical formulas. Distinctly developed crystal
Crystal
A crystal or crystalline solid is a solid material whose constituent atoms, molecules, or ions are arranged in an orderly repeating pattern extending in all three spatial dimensions. The scientific study of crystals and crystal formation is known as crystallography...
s are somewhat rare, the mineral usually presenting the form of cleavage masses. The hardness is 3.5 and the specific gravity 2.9. The color is white, sometimes greyish, bluish or purple. On the best developed of the three cleavages the lustre is pearly, on other surfaces it is vitreous. When exposed to water, anhydrite readily transforms to the more commonly occurring gypsum
Gypsum
Gypsum is a very soft sulfate mineral composed of calcium sulfate dihydrate, with the chemical formula CaSO4·2H2O. It is found in alabaster, a decorative stone used in Ancient Egypt. It is the second softest mineral on the Mohs Hardness Scale...
, (CaSO4·2H2O) by the absorption of water. This transformation is reversible, with gypsum or calcium sulfate hemihydrate
Plaster
Plaster is a building material used for coating walls and ceilings. Plaster starts as a dry powder similar to mortar or cement and like those materials it is mixed with water to form a paste which liberates heat and then hardens. Unlike mortar and cement, plaster remains quite soft after setting,...
forming anhydrite by heating to ~200°C under normal atmospheric conditions. Anhydrite is commonly associated with calcite
Calcite
Calcite is a carbonate mineral and the most stable polymorph of calcium carbonate . The other polymorphs are the minerals aragonite and vaterite. Aragonite will change to calcite at 380-470°C, and vaterite is even less stable.-Properties:...
, halite
Halite
Halite , commonly known as rock salt, is the mineral form of sodium chloride . Halite forms isometric crystals. The mineral is typically colorless or white, but may also be light blue, dark blue, purple, pink, red, orange, yellow or gray depending on the amount and type of impurities...
, and sulfide
Sulfide
A sulfide is an anion of sulfur in its lowest oxidation state of 2-. Sulfide is also a slightly archaic term for thioethers, a common type of organosulfur compound that are well known for their bad odors.- Properties :...
s such as galena
Galena
Galena is the natural mineral form of lead sulfide. It is the most important lead ore mineral.Galena is one of the most abundant and widely distributed sulfide minerals. It crystallizes in the cubic crystal system often showing octahedral forms...
, chalcopyrite
Chalcopyrite
Chalcopyrite is a copper iron sulfide mineral that crystallizes in the tetragonal system. It has the chemical composition CuFeS2. It has a brassy to golden yellow color and a hardness of 3.5 to 4 on the Mohs scale. Its streak is diagnostic as green tinged black.On exposure to air, chalcopyrite...
, molybdenite
Molybdenite
Molybdenite is a mineral of molybdenum disulfide, MoS2. Similar in appearance and feel to graphite, molybdenite has a lubricating effect that is a consequence of its layered structure. The atomic structure consists of a sheet of molybdenum atoms sandwiched between sheets of sulfur atoms...
and pyrite
Pyrite
The mineral pyrite, or iron pyrite, is an iron sulfide with the formula FeS2. This mineral's metallic luster and pale-to-normal, brass-yellow hue have earned it the nickname fool's gold because of its resemblance to gold...
in vein deposits.

Anhydrite is most frequently found in evaporite
Evaporite
Evaporite is a name for a water-soluble mineral sediment that result from concentration and crystallization by evaporation from an aqueous solution. There are two types of evaporate deposits, marine which can also be described as ocean deposits, and non-marine which are found in standing bodies of...
deposits with gypsum; it was, for instance, first discovered, in 1794, in a salt mine near Hall in Tirol
Hall in Tirol
Hall in Tirol is a town in the Innsbruck-Land district of Tyrol, Austria. Located at an altitude of 574 m, about 5 km east of the state's capital Innsbruck in the Inn valley, it has a population of about 12,700 .-History:...
. In this occurrence depth is critical since nearer the surface anhydrite has been altered to gypsum by absorption of circulating ground water.

From an aqueous solution
Solution
In chemistry, a solution is a homogeneous mixture composed of only one phase. In such a mixture, a solute is dissolved in another substance, known as a solvent. The solvent does the dissolving.- Types of solutions :...
calcium sulfate is deposited as crystals of gypsum, but when the solution contains an excess of sodium
Sodium
Sodium is a chemical element with the symbol Na and atomic number 11. It is a soft, silvery-white, highly reactive metal and is a member of the alkali metals; its only stable isotope is 23Na. It is an abundant element that exists in numerous minerals, most commonly as sodium chloride...
or potassium
Potassium
Potassium is the chemical element with the symbol K and atomic number 19. Elemental potassium is a soft silvery-white alkali metal that oxidizes rapidly in air and is very reactive with water, generating sufficient heat to ignite the hydrogen emitted in the reaction.Potassium and sodium are...
chloride
Chloride
The chloride ion is formed when the element chlorine, a halogen, picks up one electron to form an anion Cl−. The salts of hydrochloric acid HCl contain chloride ions and can also be called chlorides. The chloride ion, and its salts such as sodium chloride, are very soluble in water...
anhydrite is deposited if temperature is above 40 °C. This is one of the several methods by which the mineral has been prepared artificially, and is identical with its mode of origin in nature, the mineral is common in salt basin
Depression (geology)
A depression in geology is a landform sunken or depressed below the surrounding area. Depressions may be formed by various mechanisms.Structural or tectonic related:...
s.

Anhydrite occurs in a tidal flat environment in the Persian Gulf
Persian Gulf
The Persian Gulf, in Southwest Asia, is an extension of the Indian Ocean located between Iran and the Arabian Peninsula.The Persian Gulf was the focus of the 1980–1988 Iran-Iraq War, in which each side attacked the other's oil tankers...
sabkha
Sabkha
Sabkha is a transliteration of the Arabic word for a salt flat. Sabkhas are supratidal, forming along arid coastlines and are characterized by evaporite-carbonate deposits with some siliciclastics. Sabkhas form subaerial, prograding and shoaling-upward sequences that have an average thickness of a...
s as massive diagenetic
Diagenesis
In geology and oceanography, diagenesis is any chemical, physical, or biological change undergone by a sediment after its initial deposition and during and after its lithification, exclusive of surface alteration and metamorphism. These changes happen at relatively low temperatures and pressures...
replacement nodule
Nodule (geology)
A nodule in petrology or mineralogy is a secondary structure, generally spherical or irregularly rounded in shape. Nodules are typically solid replacement bodies of chert or iron oxides formed during diagenesis of a sedimentary rock...
s. Cross sections of these nodular masses have a netted appearance and have been referred to as chicken wire anhydrite. Nodular anhydrite occurs as replacement of gypsum in a variety of sedimentary depositional environments.

Massive amounts of anhydrite occur when salt dome
Salt dome
A salt dome is a type of structural dome formed when a thick bed of evaporite minerals found at depth intrudes vertically into surrounding rock strata, forming a diapir....
s form a caprock
Caprock
The Caprock is a region in the Panhandle of Texas . It is the land to the west of the Caprock Escarpment, which separates it from plains stretching to the east at a much lower elevation....
. Anhydrite is 1–3% of the salt in salt domes and is generally left as a cap at the top of the salt when the halite
Halite
Halite , commonly known as rock salt, is the mineral form of sodium chloride . Halite forms isometric crystals. The mineral is typically colorless or white, but may also be light blue, dark blue, purple, pink, red, orange, yellow or gray depending on the amount and type of impurities...
is removed by pore waters. The typical cap rock is a salt, topped by a layer of anhydrite, topped by patches of gypsum, topped by a layer of calcite. Interaction with oil can reduce SO4 creating calcite
Calcite
Calcite is a carbonate mineral and the most stable polymorph of calcium carbonate . The other polymorphs are the minerals aragonite and vaterite. Aragonite will change to calcite at 380-470°C, and vaterite is even less stable.-Properties:...
, water, and hydrogen sulfide
Hydrogen sulfide
Hydrogen sulfide is the chemical compound with the formula . It is a colorless, very poisonous, flammable gas with the characteristic foul odor of expired eggs perceptible at concentrations as low as 0.00047 parts per million...
(H2S).

The name anhydrite was given by A. G. Werner in 1804, because of the absence of water of crystallization, as contrasted with the presence of water in gypsum. Some obsolete names for the species are muriacite and karstenite; the former, an earlier name, being given under the impression that the substance was a chloride (muriate). A peculiar variety occurring as contorted concretionary masses is known as tripe-stone, and a scaly granular variety, from Volpino
Costa Volpino
Costa Volpino is a comune in the province of Bergamo, in Lombardy, Italy. Situated at the end of Valle Camonica, where the Oglio river enters the Lake Iseo, it is bounded by other communes of Lovere and Rogno.-References:...
, near Bergamo
Bergamo
Bergamo is a town and comune in Lombardy, Italy, about 40 km northeast of Milan. The comune is home to over 120,000 inhabitants. It is served by the Orio al Serio Airport, which also serves the Province of Bergamo, and to a lesser extent the metropolitan area of Milan...
, in Lombardy
Lombardy
Lombardy is one of the 20 regions of Italy. The capital is Milan. One-sixth of Italy's population lives in Lombardy and about one fifth of Italy's GDP is produced in this region, making it the most populous and richest region in the country and one of the richest in the whole of Europe...
, as vulpinite; the latter is cut and polished for ornamental purposes.