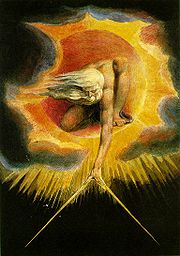 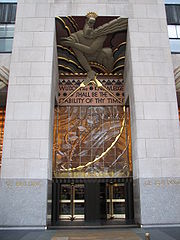 Ancient of Days is a name for God
God
God is the English name given to a singular being in theistic and deistic religions who is either the sole deity in monotheism, or a single deity in polytheism....
in Aramaic: Atik Yomin; in the Greek Septuagint: Palaios Hemeron; and in the Vulgate
Vulgate
The Vulgate is a late 4th-century Latin translation of the Bible. It was largely the work of St. Jerome, who was commissioned by Pope Damasus I in 382 to make a revision of the old Latin translations...
: Antiquus Dierum.

The title "Ancient of Days" has been used as a source of inspiration in art and music, denoting the Creator's aspects of eternity
Eternity
While in the popular mind, eternity often simply means existence for a limitless amount of time, many have used it to refer to a timeless existence altogether outside time. By contrast, infinite temporal existence is then called sempiternity. Something eternal exists outside time; by contrast,...
combined with perfection
Perfection
Perfection is, broadly, a state of completeness and flawlessness.The term "perfection" is actually used to designate a range of diverse, if often kindred, concepts...
. William Blake
William Blake
William Blake was an English poet, painter, and printmaker. Largely unrecognised during his lifetime, Blake is now considered a seminal figure in the history of both the poetry and visual arts of the Romantic Age...
's watercolour and relief etching entitled "The Ancient of Days
The Ancient of Days
The Ancient of Days is the title of a design by William Blake, originally published as the frontispiece to a 1794 work, Europe a Prophecy. It shows a figure, the Ancient of Days, crouching in a circular design with a cloud-like background. His out-stretched hand holds a compass over the darker void...
" is one such example.

See also The names of God in Judaism


There are many sources for this term, including:

I beheld till the thrones were cast down, and the Ancient of Days did sit, whose garment was white as snow, and the hair of his head like the pure wool: his throne was like the fiery flame, and his wheels as burning fire.

Book of Daniel
The Book of Daniel is a book in the Hebrew Bible. The book tells of how Daniel, and his Judean companions, were inducted into Babylon during Jewish exile, and how their positions elevated in the court of Nebuchadnezzar. The court tales span events that occur during the reigns of Nebuchadnezzar,...
7:9

Zohar
The Zohar is the foundational work in the literature of Jewish mystical thought known as Kabbalah. It is a group of books including commentary on the mystical aspects of the Torah and scriptural interpretations as well as material on Mysticism, mythical cosmogony, and mystical psychology...
3:136b

This term appears three times in the book of Daniel
Book of Daniel
The Book of Daniel is a book in the Hebrew Bible. The book tells of how Daniel, and his Judean companions, were inducted into Babylon during Jewish exile, and how their positions elevated in the court of Nebuchadnezzar. The court tales span events that occur during the reigns of Nebuchadnezzar,...
(7:9, 13, 22), and is used in the sense of God being eternal
Eternity
While in the popular mind, eternity often simply means existence for a limitless amount of time, many have used it to refer to a timeless existence altogether outside time. By contrast, infinite temporal existence is then called sempiternity. Something eternal exists outside time; by contrast,...
.

In Eastern Orthodox Christian hymns and icon
Icon
An icon is a religious work of art, most commonly a painting, from Eastern Christianity and in certain Eastern Catholic churches...
s, the Ancient of Days is sometimes identified with God the Father
God the Father
God the Father is a gendered title given to God in many monotheistic religions, particularly patriarchal, Abrahamic ones. In Judaism, God is called Father because he is the creator, life-giver, law-giver, and protector...
; but most properly, in accordance with Orthodox theology he is identified with God the Son
God the Son
God the Son is the second person of the Trinity in Christian theology. The doctrine of the Trinity identifies Jesus of Nazareth as God the Son, united in essence but distinct in person with regard to God the Father and God the Holy Spirit...
, or Jesus
Jesus
Jesus of Nazareth , commonly referred to as Jesus Christ or simply as Jesus or Christ, is the central figure of Christianity...
Christ
Christ
Christ is the English term for the Greek meaning "the anointed one". It is a translation of the Hebrew , usually transliterated into English as Messiah or Mashiach...
. As such, Eastern Christian art will sometimes portray Jesus Christ as an old man, the Ancient of Days, to show symbolically that he existed from all eternity, and sometimes as a young man to portray him as he was incarnate. This iconography
Iconography
Iconography is the branch of art history which studies the identification, description, and the interpretation of the content of images. The word iconography literally means "image writing", and comes from the Greek "image" and "to write". A secondary meaning is the painting of icons in the...
emerged in the 6th century, mostly in the Eastern Empire. It was declared by the Russian Orthodox Church
Russian Orthodox Church
The Russian Orthodox Church or, alternatively, the Moscow Patriarchate The ROC is often said to be the largest of the Eastern Orthodox churches in the world; including all the autocephalous churches under its umbrella, its adherents number over 150 million worldwide—about half of the 300 million...
at the Great Synod of Moscow
Stoglavy Sobor
The Stoglavy Sobor was a church council held in Moscow in 1551, with the participation of Tsar Ivan IV, Metropolitan Macarius, and representatives of the Boyar Duma...
in 1667 that the Ancient of Days was the Son and not the Father. In the Western Church similar figures usually represent only God the Father. Building his argument upon the Daniel passage, Thomas Aquinas
Thomas Aquinas
Thomas Aquinas, O.P. , also Thomas of Aquin or Aquino, was an Italian Dominican priest of the Catholic Church, and an immensely influential philosopher and theologian in the tradition of scholasticism, known as Doctor Angelicus, Doctor Communis, or Doctor Universalis...
identifies the Ancient of Days as the Person of the Father.

In the hymn
Hymn
A hymn is a type of song, usually religious, specifically written for the purpose of praise, adoration or prayer, and typically addressed to a deity or deities, or to a prominent figure or personification...
"Immortal, Invisible, God only Wise", the last two lines of the first verse read:

Most blessed, most glorious, the Ancient of Days,
Almighty, victorious, Thy great Name we praise.

says, “I kept on beholding in the visions of the night, and, see there! with the clouds of the heavens someone like a son of man happened to be coming; and to the Ancient of Days he gained access, and they brought him up close even before that One. And to him there were given rulership and dignity and kingdom, that the peoples, national groups and languages should all serve even him. His rulership is an indefinitely lasting rulership that will not pass away, and his kingdom one that will not be brought to ruin." A visit by the Son of Man to bestow a kingdom and honor on the Ancient of Days would suggest that they are two distinct identities. Among ancient Christian pseudepigrapha, one Book of Enoch states that He who is called “Son of man,” who existed before the worlds were, is seen by Enoch in company with the “Ancient of Days”

In the Church of Jesus Christ of Latter-day Saints, the title Ancient of Days belongs to Adam
Adam and Eve
Adam and Eve were, according to the Genesis creation narratives, the first human couple to inhabit Earth, created by YHWH, the God of the ancient Hebrews...
, the oldest and earliest man, who is also identified with the archangel
Archangel
An archangel is an angel of high rank. Archangels are found in a number of religious traditions, including Judaism, Christianity and Islam. Michael and Gabriel are recognized as archangels in Judaism and by most Christians. Michael is the only archangel specifically named in the Protestant Bible...
Michael
Michael (archangel)
Michael , Micha'el or Mîkhā'ēl; , Mikhaḗl; or Míchaël; , Mīkhā'īl) is an archangel in Jewish, Christian, and Islamic teachings. Roman Catholics, Anglicans, and Lutherans refer to him as Saint Michael the Archangel and also simply as Saint Michael...
.

The Sanskrit
Sanskrit
Sanskrit , is a historical Indo-Aryan language and the primary liturgical language of Hinduism, Jainism and Buddhism.Buddhism: besides Pali, see Buddhist Hybrid Sanskrit Today, it is listed as one of the 22 scheduled languages of India and is an official language of the state of Uttarakhand...
name, Karttikeya or Skanda, means "always a youth" and is revered as one of the four (or seven) sons of Brahma
Brahma
Brahma is the Hindu god of creation and one of the Trimurti, the others being Vishnu and Shiva. According to the Brahma Purana, he is the father of Mānu, and from Mānu all human beings are descended. In the Ramayana and the...
.

In Buddhism
Buddhism
Buddhism is a religion and philosophy encompassing a variety of traditions, beliefs and practices, largely based on teachings attributed to Siddhartha Gautama, commonly known as the Buddha . The Buddha lived and taught in the northeastern Indian subcontinent some time between the 6th and 4th...
, in the Kevattha Sutta (Digha Nikaya 11), the term "ancient of days" is referred to the creator God Brahma,

"“I am the Great Brahma, the Supreme, the Mighty, the All-seeing, the Ruler, the Lord of all, the Controller, the Creator, the Chief of all, appointing to each his place, the Ancient of days, the Father of all that are and are to be.” ."

In Buddhism, although Brahma or God is respected, he is not regarded as omnipotent or all knowing, but someone in samsara
Samsara
thumb|right|200px|Traditional Tibetan painting or [[Thanka]] showing the [[wheel of life]] and realms of saṃsāraSaṅsāra or Saṃsāra , , literally meaning "continuous flow", is the cycle of birth, life, death, rebirth or reincarnation within Hinduism, Buddhism, Bön, Jainism, Sikhism, and other...
who is subject to ignorance, birth and death (over billions of years) and a disciple of the Buddha.

In the Bahá’í Faith, 'the Ancient of Days' is one of the titles with which Bahá’u’lláh refers to Himself.