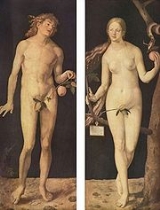 Overview
Adam and Eve were, according to the Genesis creation narratives, the first human couple to inhabit Earth
Earth
Earth is the third planet from the Sun, and the densest and fifth-largest of the eight planets in the Solar System. It is also the largest of the Solar System's four terrestrial planets...
, created by YHWH, the God of the ancient Hebrews
Hebrews
Hebrews is an ethnonym used in the Hebrew Bible...
. Adam
Adam
Adam is a figure in the Book of Genesis. According to the creation myth of Abrahamic religions, he is the first human. In the Genesis creation narratives, he was created by Yahweh-Elohim , and the first woman, Eve was formed from his rib...
and Eve
Eve
Eve is the first woman created by God in the Book of Genesis.Eve may also refer to:-People:*Eve , a common given name and surname*Eve , American recording artist and actress-Places:...
ate fruit from the tree of the knowledge of good and evil, causing their expulsion from the Garden of Eden
Garden of Eden
The Garden of Eden is in the Bible's Book of Genesis as being the place where the first man, Adam, and his wife, Eve, lived after they were created by God. Literally, the Bible speaks about a garden in Eden...
.

The language of sexuality and gender distinction is not used explicitly until the woman is created in Genesis 2:22-24.

Creation of Adam and age of earth
More

Adam and Eve had many advantages, but the principle one was that they escaped teething.

Adam and Noah were ancestors of mine. I never thought much of them. Adam lacked character. He couldn't be trusted with apples. Noah had an absurd idea that he could navigate without any knowledge of navigation, and he ran into the only shoal place on earth.

“Adam knew Eve his wife and she conceived.” It is a pity that this is still the only knowledge of their wives at which some men seem to arrive.

Adam, man's benefactor — he gave him all he has ever received that was worth having — Death.

Adam was but human — this explains it all. He did not want the apple for the apple's sake, he wanted it only because it was forbidden. The mistake was in not forbidding the serpent; then he would have eaten the serpent.

After all these years, I see that I was mistaken about Eve in the beginning; it is better to live outside the Garden with her than inside it without her.

Ever since Eve gave Adam the apple, there has been a misunderstanding between the sexes about gifts.

It all began with Adam. He was the first man to tell a joke — or a lie. How lucky Adam was. He knew when he said a good thing, nobody had said it before. Adam was not alone in the Garden of Eden, however, and does not deserve all the credit; much is due to Eve, the first woman, and Satan, the first consultant.

Let us be thankful to Adam our benefactor. He cut us out of the 'blessing' of idleness and won for us the 'curse' of labor.