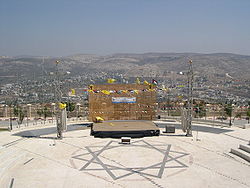 An-Najah National University (Arabic: جامعة النجاح الوطنية) is a Palestinian non-governmental public university governed by a board of Trustees. It is located in Nablus
Nablus
Nablus is a Palestinian city in the northern West Bank, approximately north of Jerusalem, with a population of 126,132. Located in a strategic position between Mount Ebal and Mount Gerizim, it is the capital of the Nablus Governorate and a Palestinian commercial and cultural center.Founded by the...
, in the northern West Bank
West Bank
The West Bank ) of the Jordan River is the landlocked geographical eastern part of the Palestinian territories located in Western Asia. To the west, north, and south, the West Bank shares borders with the state of Israel. To the east, across the Jordan River, lies the Hashemite Kingdom of Jordan...
. The university has over 16,500 students and 300 professors in 19 faculties. It is the largest Palestinian university.

In 1988, during the First Intifada
First Intifada
The First Intifada was a Palestinian uprising against the Israeli occupation of the Palestinian Territories. The uprising began in the Jabalia refugee camp and quickly spread throughout Gaza, the West Bank and East Jerusalem....
, the campus was declared a "closed military area" by Israel
Israel
The State of Israel is a parliamentary republic located in the Middle East, along the eastern shore of the Mediterranean Sea...
and did not reopen until 1991. During such time, the faculty of NNU stood to the challenge and continued in fulfilling the founders' vision in serving the Palstinian and Arab community by meeting with students at homes and local private places.

It has grown rapidly in recent years with many former students becoming professors after completing their PhD
PHD
PHD may refer to:*Ph.D., a doctorate of philosophy*Ph.D. , a 1980s British group*PHD finger, a protein sequence*PHD Mountain Software, an outdoor clothing and equipment company*PhD Docbook renderer, an XML renderer...
’s.

An-Najah's record of community work has been a major motive for building solidarity links with it.

Most of the students are Palestinian
Palestinian people
The Palestinian people, also referred to as Palestinians or Palestinian Arabs , are an Arabic-speaking people with origins in Palestine. Despite various wars and exoduses, roughly one third of the world's Palestinian population continues to reside in the area encompassing the West Bank, the Gaza...
, but there are also students and professors from all over the world. A variety of languages are spoken on campus, including Arabic
Arabic language
Arabic is a name applied to the descendants of the Classical Arabic language of the 6th century AD, used most prominently in the Quran, the Islamic Holy Book...
, Hebrew
Hebrew language
Hebrew is a Semitic language of the Afroasiatic language family. Culturally, is it considered by Jews and other religious groups as the language of the Jewish people, though other Jewish languages had originated among diaspora Jews, and the Hebrew language is also used by non-Jewish groups, such...
, English
English language
English is a West Germanic language that arose in the Anglo-Saxon kingdoms of England and spread into what was to become south-east Scotland under the influence of the Anglian medieval kingdom of Northumbria...
, French
French language
French is a Romance language spoken as a first language in France, the Romandy region in Switzerland, Wallonia and Brussels in Belgium, Monaco, the regions of Quebec and Acadia in Canada, and by various communities elsewhere. Second-language speakers of French are distributed throughout many parts...
, and Spanish
Spanish language
Spanish , also known as Castilian , is a Romance language in the Ibero-Romance group that evolved from several languages and dialects in central-northern Iberia around the 9th century and gradually spread with the expansion of the Kingdom of Castile into central and southern Iberia during the...
.

In 2010 six members of the faculty including Ghassan Khaled were arrested by Palestinian Authority security forces for being closely linked to a charity that is suspected of being a front for Hamas
Hamas
Hamas is the Palestinian Sunni Islamic or Islamist political party that governs the Gaza Strip. Hamas also has a military wing, the Izz ad-Din al-Qassam Brigades...
. In 2011, Abdel Sattar Qassem, a professor of political science at the university and critic of the Palestinian leadership was arrested by the Palestinian Authority following a complaint by the university president that Qassem had written an article critical of the university administration for refusing to comply with a court order rescinding its decision to expel four students. Qassem had been targeted in the past by Palestinian security forces, and was at one point shot and wounded.

The University has sixteen Scientific Faculties and Humanities
Humanities
The humanities are academic disciplines that study the human condition, using methods that are primarily analytical, critical, or speculative, as distinguished from the mainly empirical approaches of the natural sciences....
Faculties.

An-Najah is a partner of the McGill Middle East Program in Civil Society and Peace Building. Each year, 2500 of An-Najah's undergraduate students participate in volunteer programs run through the MMEP's Community Service Centre in Nablus.