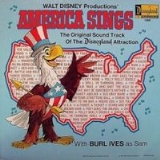 Encyclopedia
America Sings was an attraction at Disneyland in Anaheim, California
Anaheim, California
Anaheim is a city in Orange County, California. As of the 2010 United States Census, the city population was about 365,463, making it the most populated city in Orange County, the 10th most-populated city in California, and ranked 54th in the United States...
from 1974 to 1988. It featured a cast of Audio-Animatronic animals that entertained the audience by singing songs from various periods in America's musical history, often in a humorous fashion.

America Sings was comparable to Disneyland's Country Bear Jamboree
Country Bear Jamboree
The Country Bear Jamboree is an attraction at the Magic Kingdom in the Walt Disney World Resort and at Tokyo Disneyland in the Tokyo Disney Resort, as well as a former attraction at Disneyland Park. All versions of the attraction are similar....
, in that it featured a singing cast of audio-animatronics. The show's Masters of Ceremony
Master of Ceremonies
A Master of Ceremonies , or compere, is the host of a staged event or similar performance.An MC usually presents performers, speaks to the audience, and generally keeps the event moving....
were an American bald eagle
Bald Eagle
The Bald Eagle is a bird of prey found in North America. It is the national bird and symbol of the United States of America. This sea eagle has two known sub-species and forms a species pair with the White-tailed Eagle...
named Sam (voiced by Burl Ives
Burl Ives
Burl Icle Ivanhoe Ives was an American actor, writer and folk music singer. As an actor, Ives's work included comedies, dramas, and voice work in theater, television, and motion pictures. Music critic John Rockwell said, "Ives's voice .....
) and an unnamed owl
Owl
Owls are a group of birds that belong to the order Strigiformes, constituting 200 bird of prey species. Most are solitary and nocturnal, with some exceptions . Owls hunt mostly small mammals, insects, and other birds, although a few species specialize in hunting fish...
rumored to be named Ollie (voiced by Sam Edwards
Sam Edwards
Sam Edwards was an American actor. His most famous role on TV was as the banker in the TV series Little House on the Prairie.-Biography:Born into a showbusiness family, his first role was as a baby in his mother's arms...
). The image of Eagle Sam was designed by Disney animator Marc Davis, as were the other characters. Eagle Sam is completely separate from the Sam the Olympic Eagle
Sam (Olympic mascot)
Sam the Olympic Eagle is the mascot of the 1984 Summer Olympics which were held in Los Angeles. He is a bald eagle, which is the national bird of the United States, where the games were held. He also shares the name of Uncle Sam, another American symbol. Sam was designed by C. Robert Moore, an...
character designed a decade later by C. Robert Moore (also a Disney employee) for the 1984 Summer Olympics
1984 Summer Olympics
The 1984 Summer Olympics, officially known as the Games of the XXIII Olympiad, was an international multi-sport event held in Los Angeles, California, United States in 1984...
.

Like the Carousel of Progress, the first and the last scenes of America Sings involved the loading and unloading of guests, while the other four scenes, or "acts", depicted a particular era. However, the identical load and unload theaters each featured a small curtained gazebo
Gazebo
A gazebo is a pavilion structure, sometimes octagonal, that may be built, in parks, gardens, and spacious public areas. Gazebos are freestanding or attached to a garden wall, roofed, and open on all sides; they provide shade, shelter, ornamental features in a landscape, and a place to rest...
with a backdrop showing a park. The curtains would open to reveal Sam and the owl standing on a two-level podium
Podium
A podium is a platform that is used to raise something to a short distance above its surroundings. It derives from the Greek πόδι In architecture a building can rest on a large podium. Podia can also be used to raise people, for instance the conductor of an orchestra stands on a podium as do many...
, with Sam standing on the higher level, introducing or closing the show.

Between each act, as the theater rotated, the lights blacked out, and the theater illuminated with flashing stars; during the rotations, Sam sang about the next era the audience was about to enter, reprising the chorus of "Yankee Doodle
Yankee Doodle
"Yankee Doodle" is a well-known Anglo-American song, the origin of which dates back to the Seven Years' War. It is often sung patriotically in the United States today and is the state anthem of Connecticut...
".

The characters in America Sings were patterned after the characters from the concept art for an animated movie called Chanticleer, that Walt Disney scrapped back in the 1960s.

Norman "Buddy" Baker
Buddy Baker (composer)
Norman "Buddy" Baker was an American composer who scored many of Walt Disney's films, such as The Apple Dumpling Gang, The Apple Dumpling Gang Rides Again, The Shaggy D.A., The Million Dollar Duck and The Fox and the Hound.Baker was born and raised in Springfield, Missouri, and got his degree in...
arranged a selection of songs chosen to represent a panoramic view of American music. 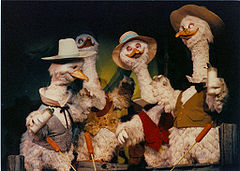 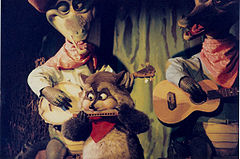 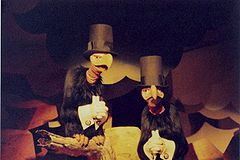 Act 3 - The Gay '90s
1890s
The 1890s were sometimes referred to as the "Mauve Decade" - because William Henry Perkin's aniline dye allowed the widespread use of that colour in fashion - and also as the "Gay Nineties", under the then-current usage of the word "gay" which referred simply to merriment and frivolity, with no... 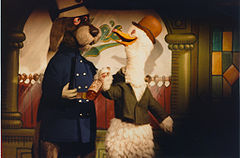 On July 8, 1974, nine days after the attraction opened, 18-year-old Disneyland cast member Deborah Gail Stone was killed when she was crushed between the building's rotating wall and a stationary wall. Stone had ventured too close to the area between the rotating wall and the fixed stage wall and was caught between them. A guest in the adjacent theater heard her screams, but she was already dead when Disneyland staff got to her .

Afterwards, America Sings was closed for two days while safety lights were installed. Eventually, the walls were remodeled so that they would break away if a similar incident occurred.

America Sings closed on Sunday, April 10, 1988. According to Alice Davis, wife of the late Marc Davis, production of Disneyland's Splash Mountain
Splash Mountain
Splash Mountain is a themed log flume attraction at Disneyland, Tokyo Disneyland, and the Magic Kingdom at the Walt Disney World Resort, based on the characters, stories and songs from the 1946 Disney film Song of the South...
had gone way over budget
Cost overrun
A cost overrun, also known as a cost increase or budget overrun, is an unexpected cost incurred in excess of a budgeted amount due to an under-estimation of the actual cost during budgeting...
and the only way to recover was to close down America Sings and use the characters from that attraction. Show sponsor Del Monte had already ended its sponsorship. The Carousel Theater was used as office space for ten years. During this time, the carousel theater's external appearance was unchanged. A large sign in front of the building showed Sorcerer Mickey alongside text reading, "Sorry, we're closed to imagineer a brand new attraction." For many years guests wondered what the new attraction was going to be. For a few years, during the planned 'Disney Decade' started by Michael Eisner
Michael Eisner
Michael Dammann Eisner is an American businessman. He was the chief executive officer of The Walt Disney Company from 1984 until 2005.-Early life:...
, a new audio-animatronic show called Plectu's Fantastic Intergalactic Revue was to open. It was to have been an outer space
Outer space
Outer space is the void that exists between celestial bodies, including the Earth. It is not completely empty, but consists of a hard vacuum containing a low density of particles: predominantly a plasma of hydrogen and helium, as well as electromagnetic radiation, magnetic fields, and neutrinos....
-themed musical-variety revue featuring a troupe of Audio-Animatronics itinerant alien musicians whose spaceship has landed in Tomorrowland. The idea was part of the original "Tomorrowland 2055" plan and was planned to open around 1994. However, Disneyland Paris, which opened in 1992, ended up costing billions of dollars, so the whole "Tomorrowland 2055" plan was scrapped due to budget considerations.

America Sings was finally replaced by Innoventions
Innoventions (Disneyland)
Innoventions is an attraction in Tomorrowland at Disneyland in Anaheim, California. It opened on July 3, 1998 as part of the New Tomorrowland, and focuses on near-futuristic technologies. It occupies the Carousel Theater, a round two-story building in which the outer half of the first floor rotates...
, a version of the Epcot
Epcot
Epcot is a theme park in the Walt Disney World Resort, located near Orlando, Florida. The park is dedicated to the celebration of human achievement, namely international culture and technological innovation. The second park built at the resort, it opened on October 1, 1982 and was initially named...
attraction of the same name, in 1998. Most of the Audio-Animatronic animals were moved to Disneyland's Splash Mountain log flume, which opened on Disneyland's 34th anniversary on July 17, 1989. In 1986, two years before America Sings officially closed, two audio-animatronic geese were taken out of the attraction. They had their "skin" removed, which left only a robotic skeleton, had their heads replaced, and were used as two talkative G2 droids in the queue to Star Tours
Star Tours
Star Tours is a motion simulator attraction currently operating at Tokyo Disneyland and Disneyland Park at Disneyland Paris. The ride is based on the successful Star Wars film series created by George Lucas, making it the first Disney attraction based on a non-Disney produced film.The first...
, which would open in early 1987. Ironically, one of them (named G2-9T) still sings a modified "I've Been Working on the Railroad
I've Been Working on the Railroad
"I've Been Working on the Railroad" is an American folk song. The first published version appeared as "Levee Song" in Carmina Princetonia, a book of Princeton University songs published in 1894...
" (retitled "I've Been Working on the Same Droid"). As a result, the geese quartets in Acts 1 and 2 became trios until the ride ceased to operate. The rock and roll stork in the finale is now used by Imagineers for training new Animatronics programmers, acting as a final exam of sorts. The remainder of the show's Audio-Animatronics were recycled.