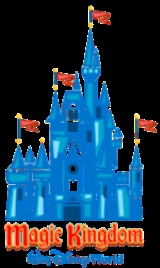 Overview
Magic Kingdom Park is one of four theme parks at the Walt Disney World Resort
Walt Disney World Resort
Walt Disney World Resort , is the world's most-visited entertaimental resort. Located in Lake Buena Vista, Florida ; approximately southwest of Orlando, Florida, United States, the resort covers an area of and includes four theme parks, two water parks, 23 on-site themed resort hotels Walt...
located near Orlando, Florida
Orlando, Florida
Orlando is a city in the central region of the U.S. state of Florida. It is the county seat of Orange County, and the center of the Greater Orlando metropolitan area. According to the 2010 US Census, the city had a population of 238,300, making Orlando the 79th largest city in the United States...
. The first park built at the resort, Magic Kingdom opened Oct. 1, 1971. Designed and built by WED Enterprises, the park's layout and attractions are similar to Disneyland
Disneyland Park (Anaheim)
Disneyland Park is a theme park located in Anaheim, California, owned and operated by the Walt Disney Parks and Resorts division of the Walt Disney Company. Known as Disneyland when it opened on July 18, 1955, and still almost universally referred to by that name, it is the only theme park to be...
in Anaheim, California
Anaheim, California
Anaheim is a city in Orange County, California. As of the 2010 United States Census, the city population was about 365,463, making it the most populated city in Orange County, the 10th most-populated city in California, and ranked 54th in the United States...
. In 2010, the park hosted approximately 17 million visitors, making it the most visited theme park in the world.
Although Walt Disney
Walt Disney
Walter Elias "Walt" Disney was an American film producer, director, screenwriter, voice actor, animator, entrepreneur, entertainer, international icon, and philanthropist, well-known for his influence in the field of entertainment during the 20th century. Along with his brother Roy O...
himself had been highly involved in planning The Florida Project
Experimental Prototype Community of Tomorrow (concept)
The Experimental Prototype Community of Tomorrow was a concept developed by Walt Disney near the end of his lifetime. This planned city was his intended purpose for the property purchased near Orlando, Florida, that eventually became the Walt Disney World Resort...
, The Walt Disney Company began construction on Magic Kingdom and the entire resort in 1967 after his death.