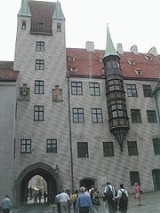 Encyclopedia
The Alte Hof in the center of Munich
Munich
Munich The city's motto is "" . Before 2006, it was "Weltstadt mit Herz" . Its native name, , is derived from the Old High German Munichen, meaning "by the monks' place". The city's name derives from the monks of the Benedictine order who founded the city; hence the monk depicted on the city's coat...
is the former imperial residence of Louis IV, Holy Roman Emperor
Louis IV, Holy Roman Emperor
Louis IV , called the Bavarian, of the house of Wittelsbach, was the King of Germany from 1314, the King of Italy from 1327 and the Holy Roman Emperor from 1328....
and consists of five wings Burgstock, Zwingerstock, Lorenzistock, Pfisterstock and Brunnenstock. 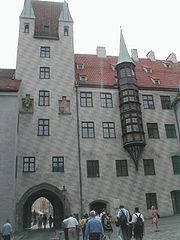 The St. Lorenz Chapel at the north side, which demolished in the 19th century, once housed the Imperial Regalia
Imperial Regalia
The Imperial Regalia, insignia, or crown jewels are the regalia of the Emperors and Kings of the Holy Roman Empire. The most important parts are the Imperial Crown, the Holy Lance and the Imperial Sword...
. After some uprisings the castle became too unsafe and the Wittelsbach
Wittelsbach
The Wittelsbach family is a European royal family and a German dynasty from Bavaria.Members of the family served as Dukes, Electors and Kings of Bavaria , Counts Palatine of the Rhine , Margraves of Brandenburg , Counts of Holland, Hainaut and Zeeland , Elector-Archbishops of Cologne , Dukes of...
moved to the Residenz
Residenz, Munich
The Munich Residenz is the former royal palace of the Bavarian monarchs in the center of the city of Munich, Germany...
. From the 15th century onwards the castle was only seat of several governmental departments.

The late Gothic
Gothic architecture
Gothic architecture is a style of architecture that flourished during the high and late medieval period. It evolved from Romanesque architecture and was succeeded by Renaissance architecture....
westwings (the Burgstock with its tower and its decorated bay window and the Zwingerstock), which were altered under Duke Sigismund
Sigismund of Bavaria
Sigismund of Bavaria was a member of the Wittelsbach dynasty. He ruled as Duke of Bavaria-Munich from 1460 to 1467, and then as Duke of Bavaria-Dachau until his death.-Biography:...
have been preserved. After destructions in World War II the castle was reconstructed. Portions of it (Lorenzistock, Pfisterstock and Brunnenstock) were redeveloped to serve as offices and luxury apartments in 2005/2006. The castle also houses a "tourist information centre for Bavarian castles".


The mint yard (Alte Münze
Alte Münze
The Alte Münze is a renaissance building in Munich which originally served for the ducal stables and the art collections of Albert V, Duke of Bavaria....
)

An arch in the north connects the castle with a renaissance
Renaissance
The Renaissance was a cultural movement that spanned roughly the 14th to the 17th century, beginning in Italy in the Late Middle Ages and later spreading to the rest of Europe. The term is also used more loosely to refer to the historical era, but since the changes of the Renaissance were not...
building which originally served for the ducal stables and the art collections of Albert V, Duke of Bavaria
Albert V, Duke of Bavaria
Albert V was Duke of Bavaria from 1550 until his death. He was born in Munich to William IV and Marie Jacobaea of Baden.-Early life:Albert was educated at Ingolstadt under good Catholic teachers...
. It was constructed by court architect Wilhelm Egkl in 1563. Later it served as mint. The inner courtyard has kept its renaissance arcades while the west facade was redesigned in neoclassical style in 1809. Finally the north facade facing got its neogothic decoration when the Maximilianstrasse was built to fit it with the concept of this royal avenue.