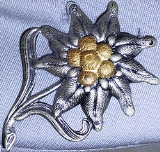 Encyclopedia
The Alpenkorps was a provisional mountain unit of division
Division (military)
A division is a large military unit or formation usually consisting of between 10,000 and 20,000 soldiers. In most armies, a division is composed of several regiments or brigades, and in turn several divisions typically make up a corps...
size formed by the Imperial German Army
German Army (German Empire)
The German Army was the name given the combined land forces of the German Empire, also known as the National Army , Imperial Army or Imperial German Army. The term "Deutsches Heer" is also used for the modern German Army, the land component of the German Bundeswehr...
during World War I
World War I
World War I , which was predominantly called the World War or the Great War from its occurrence until 1939, and the First World War or World War I thereafter, was a major war centred in Europe that began on 28 July 1914 and lasted until 11 November 1918...
. It was considered by the Allies to be one of the best units of the German Army.

After experiencing heavy difficulties in fighting the French Chasseurs Alpins in the Vosges Mountains
Vosges mountains
For the department of France of the same name, see Vosges.The Vosges are a range of low mountains in eastern France, near its border with Germany. They extend along the west side of the Rhine valley in a northnortheast direction, mainly from Belfort to Saverne...
during the Battle of the Frontiers
Battle of the Frontiers
The Battle of the Frontiers was a series of battles fought along the eastern frontier of France and in southern Belgium shortly after the outbreak of World War I. The battles represented a collision between the military strategies of the French Plan XVII and the German Schlieffen Plan...
, the German Army determined to create its own specialized mountain units
Mountain warfare
Mountain warfare refers to warfare in the mountains or similarly rough terrain. This type of warfare is also called Alpine warfare, named after the Alps mountains...
. The Royal Bavaria
Bavaria
Bavaria, formally the Free State of Bavaria is a state of Germany, located in the southeast of Germany. With an area of , it is the largest state by area, forming almost 20% of the total land area of Germany...
n I. Snowshoe
Snowshoe
A snowshoe is footwear for walking over the snow. Snowshoes work by distributing the weight of the person over a larger area so that the person's foot does not sink completely into the snow, a quality called "flotation"....
Battalion (Kgl. Bayerisches Schneeschuhbataillon I) and Schneeschuhbataillon II were formed in Munich
Munich
Munich The city's motto is "" . Before 2006, it was "Weltstadt mit Herz" . Its native name, , is derived from the Old High German Munichen, meaning "by the monks' place". The city's name derives from the monks of the Benedictine order who founded the city; hence the monk depicted on the city's coat...
, Bavaria on November 21, 1914. Schneeschuhbataillon III was formed in April 1915 from the 4th through 6th companies of Schneeschuhbataillon II. In May 1915, the three battalions were brought together with a fourth formed from troops of the other battalions and Bavarian Landwehr
Landwehr
Landwehr, or Landeswehr, is a German language term used in referring to certain national armies, or militias found in nineteenth- and early twentieth-century Europe. In different context it refers to large scale, low strength fortifications...
troops to form the 3rd Jäger
Jäger (military)
Jäger is a term that was adopted in the Enlightenment era in German-speaking states and others influenced by German military practice to describe a kind of light infantry, and it has continued in that use since then....
Regiment (Jäger Regiment Nr. 3). In October 1915, the designation Schneeschuhbataillon was eliminated. 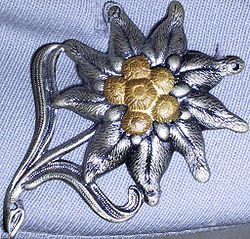 First campaigns in the Dolomites and France

Although Germany and Italy were not at war until 1916, the Alpenkorps was immediately dispatched to reinforce the thinly occupied front line in the Dolomite
Dolomites
The Dolomites are a mountain range located in north-eastern Italy. It is a part of Southern Limestone Alps and extends from the River Adige in the west to the Piave Valley in the east. The northern and southern borders are defined by the Puster Valley and the Sugana Valley...
mountains. It did not undertake offensive actions, but defended the front against repeated attacks by the Italian Alpini
Alpini
The Alpini, , are the elite mountain warfare soldiers of the Italian Army. They are currently organized in two operational brigades, which are subordinated to the Alpini Corps Command. The singular is Alpino ....
until Austria was able to extract enough forces from the eastern war theatre
Eastern Front (World War I)
The Eastern Front was a theatre of war during World War I in Central and, primarily, Eastern Europe. The term is in contrast to the Western Front. Despite the geographical separation, the events in the two theatres strongly influenced each other...
and relocate them to the new front. The unit had an air arm, which was FFA
Feldflieger Abteilung
Feldflieger Abteilung or Field Flying Companies were the pioneering field aviation units of the Luftstreitkräfte in World War I.-Composition:...
9, flying Pfalz Parasol aircraft. After four months the Alpenkorps returned briefly to the Western Front
Western Front (World War I)
Following the outbreak of World War I in 1914, the German Army opened the Western Front by first invading Luxembourg and Belgium, then gaining military control of important industrial regions in France. The tide of the advance was dramatically turned with the Battle of the Marne...
, as now the Austrian defenders were sufficient in numbers and entrenched enough to hold the front on their own. The Austrian Kaiserschützen
Kaiserschützen
The Kaiserschützen were three regiments of Austro-Hungarian mountain infantry during the K.U.K. Monarchy.-History:...
honored the men of the Alpenkorps by awarding them their unit insignia: the Edelweiss
Edelweiss
Edelweiss , Leontopodium alpinum, is a well-known European mountain flower, belonging to the sunflower family.-Names:The common name comes from German edel, meaning "noble", and weiß "white", thus signifying "noble whiteness".The scientific name Leontopodium is a Latin adaptation of Greek...
.

After only a week in France and the Dolomites the Alpenkorps was sent to fight in the Serbian Campaign
Serbian Campaign (World War I)
The Serbian Campaign was fought from late July 1914, when Austria-Hungary invaded Serbia at the outset of the First World War, until late 1915, when the Macedonian Front was formed...
.

The Alpenkorps returned to France in March 1916. After a short respite, it entered into the Battle of Verdun
Battle of Verdun
The Battle of Verdun was one of the major battles during the First World War on the Western Front. It was fought between the German and French armies, from 21 February – 18 December 1916, on hilly terrain north of the city of Verdun-sur-Meuse in north-eastern France...
in June 1916. The regiments of the Alpenkorps lost over 70% of their strength in the fighting around Fort Vaux
Fort Vaux
Fort Vaux, located in Vaux-Devant-Damloup, Meuse, France, became the second Fort to fall in the Battle of Verdun. The first fort to fall had been Fort Douaumont which was virtually undefended and had been captured by a small German raiding party in February 1916 . Fort de Vaux , on the other hand ,...
and Fleury
Fleury-devant-Douaumont
Fleury-devant-Douaumont is a commune in the Meuse department in Lorraine in north-eastern France.Since the end of the Battle of Verdun in 1916, when it had been captured and recaptured by the Germans and French 16 times, it has been unoccupied along with Bezonvaux, Beaumont-en-Verdunois,...
. After leaving the line, the regiments were reconstituted, and in mid-July 1916 the 3rd Jäger Regiment was transferred from the division. The 2nd Brigade headquarters was eliminated and the Alpenkorps became a triangular division
Triangular division
A triangular division is a designation given to the way divisions are organized. In a triangular organization, the division's main body is composed of three regimental maneuver elements. These regiments may be controlled by a brigade headquarters or directly subordinated to the division commander...
with 1st Brigade controlling the other two Jäger regiments and the Infanterie-Leib-Regiment.

Romania entered the war on the side of the Entente
Allies of World War I
The Entente Powers were the countries at war with the Central Powers during World War I. The members of the Triple Entente were the United Kingdom, France, and the Russian Empire; Italy entered the war on their side in 1915...
on August 27, 1916. In September, the Alpenkorps was dispatched to fight in the Romanian Campaign
Romanian Campaign (World War I)
The Romanian Campaign was part of the Balkan theatre of World War I, with Romania and Russia allied against the armies of the Central Powers. Fighting took place from August 1916 to December 1917, across most of present-day Romania, including Transylvania, which was part of the Austro-Hungarian...
. The Infanterie-Leib-Regiment suffered a number of losses in the mountain fighting in Romania, including one of its most prominent members, Prince Heinrich of Bavaria, a major and battalion commander. The Alpenkorps remained in Romania until April 1917 and then again returned to the Western Front. In August 1917, the Alpenkorps returned to Romania and participated in the final battles there in the wake of the Kerensky Offensive
Kerensky Offensive
The Kerensky Offensive was the last Russian offensive in World War I. It took place in July 1917.- Background :...
.

In September 1917 the Alpenkorps was sent once more to the Italian Front to reinforce the Austrian Army for the upcoming 12th Battle of the Isonzo
Battle of Caporetto
The Battle of Caporetto , took place from 24 October to 19 November 1917, near the town of Kobarid , on the Austro-Italian front of World War I...
. By this point, the Royal Württemberg
Kingdom of Württemberg
The Kingdom of Württemberg was a state that existed from 1806 to 1918, located in present-day Baden-Württemberg, Germany. It was a continuation of the Duchy of Württemberg, which came into existence in 1495...
mountain battalion ("Königlich Württembergisches Gebirgsbataillon") had been attached to the division, and one of its members, the later-Generalfeldmarschall
Generalfeldmarschall
Field Marshal or Generalfeldmarschall in German, was a rank in the armies of several German states and the Holy Roman Empire; in the Austrian Empire, the rank Feldmarschall was used...
Erwin Rommel
Erwin Rommel
Erwin Johannes Eugen Rommel , popularly known as the Desert Fox , was a German Field Marshal of World War II. He won the respect of both his own troops and the enemies he fought....
, would distinguish himself at Caporetto in November. Another company commander who distinguished himself at Caporetto, the Infanterie-Leib-Regiment's Ferdinand Schörner
Ferdinand Schörner
Ferdinand Schörner was a General and later Field Marshal in the German Army during World War II.-Early life:Schörner was born in Munich, Bavaria...
, would also rise to Field Marshal in World War II.

The Alpenkorps returned to the Western Front in 1918. It participated in the Battle of the Lys in April and fought in the Battle of Picardy in the Hundred Days Offensive
Hundred Days Offensive
The Hundred Days Offensive was the final period of the First World War, during which the Allies launched a series of offensives against the Central Powers on the Western Front from 8 August to 11 November 1918, beginning with the Battle of Amiens. The offensive forced the German armies to retreat...
. In October it returned to the Balkans, where it was at the time of the Armistice
Armistice
An armistice is a situation in a war where the warring parties agree to stop fighting. It is not necessarily the end of a war, but may be just a cessation of hostilities while an attempt is made to negotiate a lasting peace...
.


Notable members of the Alpenkorps