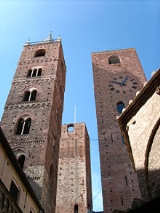 Encyclopedia
Albenga is a city and comune
Comune
In Italy, the comune is the basic administrative division, and may be properly approximated in casual speech by the English word township or municipality.-Importance and function:...
situated on the Gulf of Genoa
Gulf of Genoa
The Gulf of Genoa is the northernmost part of the Ligurian Sea. The width of the gulf is about 125 km, from the city of Imperia in the west to La Spezia in the east. The largest city on the its coast is Genoa, which has an important port....
on the Italian Riviera
Italian Riviera
The Italian Riviera, or Ligurian Riviera is the narrow coastal strip which lies between the Ligurian Sea and the mountain chain formed by the Maritime Alps and the Apennines...
in the Province of Savona
Province of Savona
The Province of Savona is a province in the Liguria region of Italy. Its capital is the city of Savona.-Overview:...
in Liguria
Liguria
Liguria is a coastal region of north-western Italy, the third smallest of the Italian regions. Its capital is Genoa. It is a popular region with tourists for its beautiful beaches, picturesque little towns, and good food.-Geography:...
, northern Italy
Italy
Italy , officially the Italian Republic languages]] under the European Charter for Regional or Minority Languages. In each of these, Italy's official name is as follows:;;;;;;;;), is a unitary parliamentary republic in South-Central Europe. To the north it borders France, Switzerland, Austria and...
. 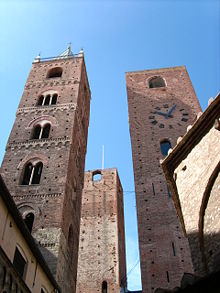 The economy is mostly based on tourism, local commerce and agriculture

The city is of Celt
Celt
The Celts were a diverse group of tribal societies in Iron Age and Roman-era Europe who spoke Celtic languages.The earliest archaeological culture commonly accepted as Celtic, or rather Proto-Celtic, was the central European Hallstatt culture , named for the rich grave finds in Hallstatt, Austria....
ic origins, the chief town of the Ligures
Ligures
The Ligures were an ancient people who gave their name to Liguria, a region of north-western Italy.-Classical sources:...
, and flourished as the municipium
Municipium
Municipium , the prototype of English municipality, was the Latin term for a town or city. Etymologically the municipium was a social contract between municipes, the "duty holders," or citizens of the town. The duties, or munera, were a communal obligation assumed by the municipes in exchange for...
of Albingaunum under the Roman Empire
Roman Empire
The Roman Empire was the post-Republican period of the ancient Roman civilization, characterised by an autocratic form of government and large territorial holdings in Europe and around the Mediterranean....
, owing to its position that offered access from the coast to the interior, and the Via Julia Augusta
Via Julia Augusta
The Via Julia Augusta is the name given to the Roman road formed by the merging of the Via Aemilia Scauri with the Via Postumia. The road runs from Placentia to Arelates through Derthona , Vada Sabatia , Albingaunum and Album Intimilium .It was begun in 13 BC by Augustus, and originally stopped...
, the Roman coast road, opened in 13 BC. A measure of the agricultural prosperity of the region is that Proculus
Proculus
Proculus was a Roman usurper, one of the "minor pretenders" according to Historia Augusta; he took the purple against Emperor Probus in 280....
of Albingaunum (executed ca. 281 AD), was able to assemble and arm 2000 of his own slaves from his latifundia
Latifundia
Latifundia are pieces of property covering very large land areas. The latifundia of Roman history were great landed estates, specializing in agriculture destined for export: grain, olive oil, or wine...
to oppose the Emperor Probus during the Crisis of the 3rd century.

From the mid-5th century Albenga was the seat of a bishopric. Its early Christian baptistery
Baptistery
In Christian architecture the baptistry or baptistery is the separate centrally-planned structure surrounding the baptismal font. The baptistry may be incorporated within the body of a church or cathedral and be provided with an altar as a chapel...
, perhaps dating to the 5th century, is now ten feet below modern street level. Alluvial deposits washed down by the torrential Centa have gradually buried the southern section of Roman Albingaunum and its port.

Albenga has a well-preserved historic centre, retaining the Roman plan of its grid planning and surrounded by its ancient walls. It still retains four of its medieval tower houses and other houses built to the Roman plan round a courtyard.

Albenga's fortunes declined with the rise of Genoa
Genoa
Genoa |Ligurian]] Zena ; Latin and, archaically, English Genua) is a city and an important seaport in northern Italy, the capital of the Province of Genoa and of the region of Liguria....
, but it is again prospering as a centre for tourism and agriculture.