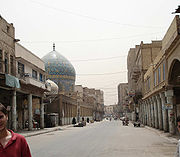 Al Rasheed Street or Al Rashid Street (Arabic
Arabic language
Arabic is a name applied to the descendants of the Classical Arabic language of the 6th century AD, used most prominently in the Quran, the Islamic Holy Book...
: شارع الرشيد) is located in Downtown Baghdad
Baghdad
Baghdad is the capital of Iraq, as well as the coterminous Baghdad Governorate. The population of Baghdad in 2011 is approximately 7,216,040...
and is one of the city's main streets, stretching from North Gate to South Gate.

The origin of Al Rasheed Street goes back to the Ottoman
Ottoman Empire
The Ottoman EmpireIt was usually referred to as the "Ottoman Empire", the "Turkish Empire", the "Ottoman Caliphate" or more commonly "Turkey" by its contemporaries...
s who ruled Iraq
Iraq
Iraq ; officially the Republic of Iraq is a country in Western Asia spanning most of the northwestern end of the Zagros mountain range, the eastern part of the Syrian Desert and the northern part of the Arabian Desert....
from 1534 to 1918. During that time, the only known public street in Baghdad was Al Naher Street (Shari al-Naher). Al Naher means River - the street stretches a few kilometers along the east banks of the river Tigris
Tigris
The Tigris River is the eastern member of the two great rivers that define Mesopotamia, the other being the Euphrates. The river flows south from the mountains of southeastern Turkey through Iraq.-Geography:...
, so this may be the reasoning behind its name.

The British
British people
The British are citizens of the United Kingdom, of the Isle of Man, any of the Channel Islands, or of any of the British overseas territories, and their descendants...
were defeated by the Ottomans on the 29th of April 1916 in Kut
Kut
Al-Kūt is a city in eastern Iraq, on the left bank of the Tigris River, about 160 kilometres south east of Baghdad. the estimated population is about 374,000 people...
(south of Baghdad), where tens of thousands of Anglo-Indian
Anglo-Indian
Anglo-Indians are people who have mixed Indian and British ancestry, or people of British descent born or living in India, now mainly historical in the latter sense. British residents in India used the term "Eurasians" for people of mixed European and Indian descent...
troops died or were wounded, and thousands more were taken prisoner, including their commander Sir Charles Townshend
Charles Townshend
Charles Townshend was a British politician. He was born at his family's seat of Raynham Hall in Norfolk, England, the second son of Charles Townshend, 3rd Viscount Townshend, and Audrey , daughter and heiress of Edward Harrison of Ball's Park, near Hertford, a lady who rivalled her son in...
. The military governor of Baghdad, Khalil Pasha
Khalil Pasha
Halil Kut was an Ottoman regional governor and military commander. Halil Pasha was the uncle of Enver Pasha, who was the War Minister during World War I.- Early career :...
(1864–1923), decided to honor this victory by giving orders to build the first ever "real" street in Baghdad. Work began in May 1916, after the head of Baghdad’s municipality, Ra'ouf Al Chadirchy, met with local landlord
Landlord
A landlord is the owner of a house, apartment, condominium, or real estate which is rented or leased to an individual or business, who is called a tenant . When a juristic person is in this position, the term landlord is used. Other terms include lessor and owner...
s to pay them compensations for the demolition of their property.

The street was first opened for the public on July 23, 1916. The first name given to the street was by Khalil Pasha who named the street “Jadde Si”. The name of the street was then inscribed on a ceramic plate
Ceramic plate
Ceramic plates are commonly used as inserts in soft ballistic vests. Most ceramic plates used in body armor provide National Institute of Justice Type III protection, allowing them to stop rifle bullets. Ceramic plates are a form of composite armor...
and placed on the main wall of Sultan Ali Mosque
Mosque
A mosque is a place of worship for followers of Islam. The word is likely to have entered the English language through French , from Portuguese , from Spanish , and from Berber , ultimately originating in — . The Arabic word masjid literally means a place of prostration...
. The sign lasted until the mid-1950s.

In 1917, Al Rasheed Street was the first street to be electrically illuminated
Electric light
Electric lights are a convenient and economic form of artificial lighting which provide increased comfort, safety and efficiency. Most electric lighting is powered by centrally-generated electric power, but lighting may also be powered by mobile or standby electric generators or battery systems...
in Baghdad city.
The source of this article is wikipedia, the free encyclopedia.  The text of this article is licensed under the GFDL.