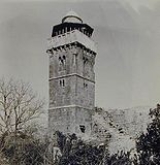 Encyclopedia
Al-Khadra Mosque also known as Hizn Sidna Yaq'ub Mosque (trans. Sadness of our Lord Jacob) is a mosque
Mosque
A mosque is a place of worship for followers of Islam. The word is likely to have entered the English language through French , from Portuguese , from Spanish , and from Berber , ultimately originating in — . The Arabic word masjid literally means a place of prostration...
situated on the lower slopes of Mount Gerizim
Mount Gerizim
Mount Gerizim is one of the two mountains in the immediate vicinity of the West Bank city of Nablus , and forms the southern side of the valley in which Nablus is situated,...
in the southwestern quarter of the Old City of Nablus
Nablus
Nablus is a Palestinian city in the northern West Bank, approximately north of Jerusalem, with a population of 126,132. Located in a strategic position between Mount Ebal and Mount Gerizim, it is the capital of the Nablus Governorate and a Palestinian commercial and cultural center.Founded by the...
in the West Bank
West Bank
The West Bank ) of the Jordan River is the landlocked geographical eastern part of the Palestinian territories located in Western Asia. To the west, north, and south, the West Bank shares borders with the state of Israel. To the east, across the Jordan River, lies the Hashemite Kingdom of Jordan...
. The mosque is rectangular in shape, and its minaret
Minaret
A minaret مناره , sometimes مئذنه) is a distinctive architectural feature of Islamic mosques, generally a tall spire with an onion-shaped or conical crown, usually either free standing or taller than any associated support structure. The basic form of a minaret includes a base, shaft, and gallery....
rises 30 metres (98.4 ft).

According to Muslim
Muslim
A Muslim, also spelled Moslem, is an adherent of Islam, a monotheistic, Abrahamic religion based on the Quran, which Muslims consider the verbatim word of God as revealed to prophet Muhammad. "Muslim" is the Arabic term for "submitter" .Muslims believe that God is one and incomparable...
tradition, the mosque is situated upon the site where Jacob
Jacob
Jacob "heel" or "leg-puller"), also later known as Israel , as described in the Hebrew Bible, the Talmud, the New Testament and the Qur'an was the third patriarch of the Hebrew people with whom God made a covenant, and ancestor of the tribes of Israel, which were named after his descendants.In the...
wept after being shown Joseph
Joseph (Hebrew Bible)
Joseph is an important character in the Hebrew bible, where he connects the story of Abraham, Isaac and Jacob in Canaan to the subsequent story of the liberation of the Israelites from slavery in Egypt....
's blood-soaked tunic which suggested that he had been mauled and killed; on the right of the courtyard is a small room said to be the place where Jacob sat down and wept. Hence the mosque's alternative name "Sadness of our Lord Jacob". According to Samaritan
Samaritan
The Samaritans are an ethnoreligious group of the Levant. Religiously, they are the adherents to Samaritanism, an Abrahamic religion closely related to Judaism...
tradition, al-Khadra Mosque had been a synagogue
Synagogue
A synagogue is a Jewish house of prayer. This use of the Greek term synagogue originates in the Septuagint where it sometimes translates the Hebrew word for assembly, kahal...
destroyed by the Crusaders. They claim that its Arabic
Arabic language
Arabic is a name applied to the descendants of the Classical Arabic language of the 6th century AD, used most prominently in the Quran, the Islamic Holy Book...
name al-Khadra ("the Green") derived from the Samaritan Mahallat Khadra ("the place of the Green"). Archaeologist Micheal Avi-Yonah identified the Khadra Mosque with the synagogue built by the Samaritan high priest Akbon in 362 CE.

The synagogue was rebuilt in 1137 by Ab Giluga, a Samaritan from Acre
Acre, Israel
Acre , is a city in the Western Galilee region of northern Israel at the northern extremity of Haifa Bay. Acre is one of the oldest continuously inhabited sites in the country....
. Several Western scholars, however, believe, because of examples of Gothic architecture
Gothic architecture
Gothic architecture is a style of architecture that flourished during the high and late medieval period. It evolved from Romanesque architecture and was succeeded by Renaissance architecture....
in portions of the present-day mosque, that in the 1170s, there stood a Crusader church and bell tower. Arab
Arab
Arab people, also known as Arabs , are a panethnicity primarily living in the Arab world, which is located in Western Asia and North Africa. They are identified as such on one or more of genealogical, linguistic, or cultural grounds, with tribal affiliations, and intra-tribal relationships playing...
geographer Yaqut al-Hamawi
Yaqut al-Hamawi
Yāqūt ibn-'Abdullah al-Rūmī al-Hamawī) was an Islamic biographer and geographer renowned for his encyclopedic writings on the Muslim world. "al-Rumi" refers to his Greek descent; "al-Hamawi" means that he is from Hama, Syria, and ibn-Abdullah is a reference to his father's name, Abdullah...
records in 1225, while Nablus was under Ayyubid rule, the buildings was restored to become a Samaritan synagogue, which he referred to as "a large mosque" which the Samaritans venerated. It is probably from this era that the Samaritan inscriptions on a minaret wall were made.

In 1242, however, the Knights Templars damaged the building, which was later destroyed in 1260 by the Mongols
Mongols
Mongols ) are a Central-East Asian ethnic group that lives mainly in the countries of Mongolia, China, and Russia. In China, ethnic Mongols can be found mainly in the central north region of China such as Inner Mongolia...
. It was transformed as a mosque in 1290 by the Mamluks during the reign of Sultan Qalawun
Qalawun
Saif ad-Dīn Qalawun aṣ-Ṣāliḥī was the seventh Mamluk sultan of Egypt...
as attested to by a foundation inscription. Most of the structure resembles Mamluk architecture and a mihrab
Mihrab
A mihrab is semicircular niche in the wall of a mosque that indicates the qibla; that is, the direction of the Kaaba in Mecca and hence the direction that Muslims should face when praying...
was added to the mosque.

According to the Palestinian government and Gush Shalom
Gush Shalom
Gush Shalom is an Israeli peace activism group founded and led by former Irgun and Knesset Member and journalist, Uri Avnery, in 1993...
, during the Second Intifada in the Battle of Nablus in 2002, Israel
Israel
The State of Israel is a parliamentary republic located in the Middle East, along the eastern shore of the Mediterranean Sea...
i bulldozers destroyed 85% of the mosque, including the Mamluk-era mihrab. The current imam of al-Khadra Mosque, Maher Kharas (the 'White Lion'), was removed from his position in a Palestinian Authority 'crack down' on militant imams in 1996, but was reinstated in 2006. Kharas, a Hamas
Hamas
Hamas is the Palestinian Sunni Islamic or Islamist political party that governs the Gaza Strip. Hamas also has a military wing, the Izz ad-Din al-Qassam Brigades...
member and opponent of Fatah
Fatah
Fataḥ is a major Palestinian political party and the largest faction of the Palestine Liberation Organization , a multi-party confederation. In Palestinian politics it is on the left-wing of the spectrum; it is mainly nationalist, although not predominantly socialist. Its official goals are found...
, regularly defied the Fatah-led Palestinian National Authority
Palestinian National Authority
The Palestinian Authority is the administrative organization established to govern parts of the West Bank and Gaza Strip...
during his weekly Friday sermons. Kharas was arrested on September 23, 2007 in another Fatah-led 'crack down' on Hamas.
The source of this article is wikipedia, the free encyclopedia.  The text of this article is licensed under the GFDL.