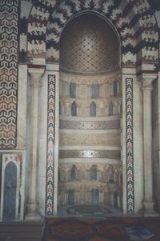 Encyclopedia
A mihrab is semicircular niche
Niche (architecture)
A niche in classical architecture is an exedra or an apse that has been reduced in size, retaining the half-dome heading usual for an apse. Nero's Domus Aurea was the first semi-private dwelling that possessed rooms that were given richly varied floor plans, shaped with niches and exedras;...
in the wall of a mosque
Mosque
A mosque is a place of worship for followers of Islam. The word is likely to have entered the English language through French , from Portuguese , from Spanish , and from Berber , ultimately originating in — . The Arabic word masjid literally means a place of prostration...
that indicates the qibla
Qibla
The Qiblah , also transliterated as Qibla, Kiblah or Kibla, is the direction that should be faced when a Muslim prays during salah...
; that is, the direction of the Kaaba
Kaaba
The Kaaba is a cuboid-shaped building in Mecca, Saudi Arabia, and is the most sacred site in Islam. The Qur'an states that the Kaaba was constructed by Abraham, or Ibraheem, in Arabic, and his son Ishmael, or Ismaeel, as said in Arabic, after he had settled in Arabia. The building has a mosque...
in Mecca
Mecca
Mecca is a city in the Hijaz and the capital of Makkah province in Saudi Arabia. The city is located inland from Jeddah in a narrow valley at a height of above sea level...
and hence the direction that Muslim
Muslim
A Muslim, also spelled Moslem, is an adherent of Islam, a monotheistic, Abrahamic religion based on the Quran, which Muslims consider the verbatim word of God as revealed to prophet Muhammad. "Muslim" is the Arabic term for "submitter" .Muslims believe that God is one and incomparable...
s should face when praying. The wall in which a mihrab appears is thus the "qibla wall."

Mihrabs should not be confused with the minbar
Minbar
A minbar is a pulpit in the mosque where the imam stands to deliver sermons or in the Hussainia where the speaker sits and lectures the congregation...
, which is the raised platform from which an Imam
Imam
An imam is an Islamic leadership position, often the worship leader of a mosque and the Muslim community. Similar to spiritual leaders, the imam is the one who leads Islamic worship services. More often, the community turns to the mosque imam if they have a religious question...
(leader of prayer) addresses the congregation.

The word mihrab originally had a non-religious meaning and simply denoted a special room in a house; a throne room in a palace, for example. The Fath al-Bari
Fath al-Bari
Fath ul-Bari fi Sharh Sahih al-Bukhari is the most valued Sunni commentary of Sahih al-Bukhari, written by Ibn Hajr Asqalani...
(p. 458), on the authority of others, suggests the mihrab is "the most honorable location of kings" and "the master of locations, the front and the most honorable." The Mosques in Islam (p. 13), in addition to Arabic sources, cites Theodor Nöldeke
Theodor Nöldeke
Theodor Nöldeke was a German Semitic scholar, who was born in Harburg and studied in Göttingen, Vienna, Leiden and Berlin....
and others as having considered a mihrab to have originally signified a throne room.

The term was subsequently used by the Islamic prophet
Prophets of Islam
Muslims identify the Prophets of Islam as those humans chosen by God and given revelation to deliver to mankind. Muslims believe that every prophet was given a belief to worship God and their respective followers believed it as well...
Muhammad
Muhammad
Muhammad |ligature]] at U+FDF4 ;Arabic pronunciation varies regionally; the first vowel ranges from ~~; the second and the last vowel: ~~~. There are dialects which have no stress. In Egypt, it is pronounced not in religious contexts...
to denote his own private prayer room. The room additionally provided access to the adjacent mosque, and the Prophet would enter the mosque through this room. This original meaning of mihrab - i.e. as a special room in the house - continues to be preserved in some forms of Judaism
Judaism
Judaism ) is the "religion, philosophy, and way of life" of the Jewish people...
where mihrabs are rooms used for private worship. In the Qur'an
Qur'an
The Quran , also transliterated Qur'an, Koran, Alcoran, Qur’ān, Coran, Kuran, and al-Qur’ān, is the central religious text of Islam, which Muslims consider the verbatim word of God . It is regarded widely as the finest piece of literature in the Arabic language...
(xix.12), the word mihrab refers to a sanctuary/place of worship.

During the reign of the Uthman ibn Affan (r. 644-656), the Caliph
Caliph
The Caliph is the head of state in a Caliphate, and the title for the ruler of the Islamic Ummah, an Islamic community ruled by the Shari'ah. It is a transcribed version of the Arabic word   which means "successor" or "representative"...
ordered a sign to be posted on the wall of the mosque at Medina
Medina
Medina , or ; also transliterated as Madinah, or madinat al-nabi "the city of the prophet") is a city in the Hejaz region of western Saudi Arabia, and serves as the capital of the Al Madinah Province. It is the second holiest city in Islam, and the burial place of the Islamic Prophet Muhammad, and...
so that pilgrims could easily identify the direction in which to address their prayers (i.e. that of Mecca). The sign was however just a sign on the wall, and the wall itself remained flat. Subsequently, during the reign of Al-Walid ibn Abd al-Malik (Al-Walid I, r. 705-715), the Al-Masjid al-Nabawi
Al-Masjid al-Nabawi
Al-Masjid al-Nabawi , often called the Prophet's Mosque, is a mosque situated in the city of Medina. As the final resting place of the Islamic prophet Muhammad, it is considered the second holiest site in Islam by Muslims and is one of the largest mosques in the world...
(Mosque of the Prophet) was renovated and the governor (wāli
Wali
Walī , is an Arabic word meaning "custodian", "protector", "sponsor", or authority as denoted by its definition "crown". "Wali" is someone who has "Walayah" over somebody else. For example, in Fiqh the father is wali of his children. In Islam, the phrase ولي الله walīyu 'llāh...
) of Medina, Umar ibn AbdulAziz, ordered that a niche be made to designate the qibla wall (which identifies the direction of Mecca), and it was in this niche that Uthman's sign was placed.

Eventually, the niche came to be universally understood to identify the qibla wall, and so came to be adopted as a feature in other mosques. A sign was no longer necessary.

The Qur'anic passage (xix.11) that refers to a minrab – "then he [i.e.
Zakariya came forth to his people from the sanctuary/place of worship" – is inscribed on or over some mihrabs.

Today, Mihrabs vary in size, are usually ornately decorated and often designed to give the impression of an arched doorway or a passage to Mecca.

In exceptional cases, the mihrab does not follow the qibla direction. One example is the Mezquita of Córdoba, Spain
Córdoba, Spain
-History:The first trace of human presence in the area are remains of a Neanderthal Man, dating to c. 32,000 BC. In the 8th century BC, during the ancient Tartessos period, a pre-urban settlement existed. The population gradually learned copper and silver metallurgy...
that points south instead of southeast. Among the proposed explanations, there is the localization of the ancient Roman
Ancient Rome
Ancient Rome was a thriving civilization that grew on the Italian Peninsula as early as the 8th century BC. Located along the Mediterranean Sea and centered on the city of Rome, it expanded to one of the largest empires in the ancient world....
cardo
Cardo
The cardo was a north-south oriented street in Roman cities, military camps, and coloniae. The cardo, an integral component of city planning, was lined with shops and vendors, and served as a hub of economic life. The main cardo was called cardo maximus.Most Roman cities also had a Decumanus...
street besides the old temple the Mezquita was built upon.