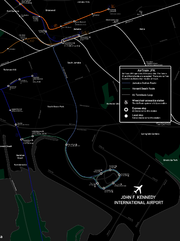 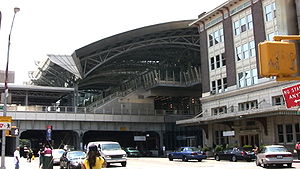 AirTrain JFK is a 3-line, 8.1 miles (13 km)-long people mover
People mover
A people mover or automated people mover is a fully automated, grade-separated mass transit system.The term is generally used only to describe systems serving relatively small areas such as airports, downtown districts or theme parks, but is sometimes applied to considerably more complex automated...
system and elevated railway
Elevated railway
An elevated railway is a form of rapid transit railway with the tracks built above street level on some form of viaduct or other steel or concrete structure. The railway concerned may be constructed according to the standard gauge, narrow gauge, light rail, monorail or suspension railway system...
in New York City
New York City
New York is the most populous city in the United States and the center of the New York Metropolitan Area, one of the most populous metropolitan areas in the world. New York exerts a significant impact upon global commerce, finance, media, art, fashion, research, technology, education, and...
providing service to John F. Kennedy International Airport
John F. Kennedy International Airport
John F. Kennedy International Airport is an international airport located in the borough of Queens in New York City, about southeast of Lower Manhattan. It is the busiest international air passenger gateway to the United States, handling more international traffic than any other airport in North...
. It is operated by Bombardier Transportation
Bombardier Transportation
Bombardier Transportation is the rail equipment division of the Canadian firm, Bombardier Inc. Bombardier Transportation is one of the world's largest companies in the rail-equipment manufacturing and servicing industry. Its headquarters are in Berlin, Germany....
under contract to the Port Authority of New York and New Jersey
Port Authority of New York and New Jersey
The Port Authority of New York and New Jersey is a bi-state port district, established in 1921 through an interstate compact, that runs most of the regional transportation infrastructure, including the bridges, tunnels, airports, and seaports, within the Port of New York and New Jersey...
, which also operates the airport and AirTrain Newark
AirTrain Newark
AirTrain Newark is a 3-mile monorail system connecting Newark Liberty International Airport to the Newark Liberty International Airport train station on the Northeast Corridor rail line of New Jersey Transit and Amtrak...
.

AirTrain connects the airport terminal
Airport terminal
An airport terminal is a building at an airport where passengers transfer between ground transportation and the facilities that allow them to board and disembark from aircraft....
s and parking areas with Long Island Rail Road
Long Island Rail Road
The Long Island Rail Road or LIRR is a commuter rail system serving the length of Long Island, New York. It is the busiest commuter railroad in North America, serving about 81.5 million passengers each year. Established in 1834 and having operated continuously since then, it is the oldest US...
(LIRR) and New York City Subway
New York City Subway
The New York City Subway is a rapid transit system owned by the City of New York and leased to the New York City Transit Authority, a subsidiary agency of the Metropolitan Transportation Authority and also known as MTA New York City Transit...
lines at the Jamaica and Howard Beach stations in Queens
Queens
Queens is the easternmost of the five boroughs of New York City. The largest borough in area and the second-largest in population, it is coextensive with Queens County, an administrative division of New York state, in the United States....
. The system consists of three overlapping routes:

With the exception of Terminal 4, all AirTrain stations are outside the terminal buildings and sit on the other side of the terminal roadway from each building and are connected to their respective stations through elevated walkways over the roadway. The Terminal 4 station was built inside the terminal as it opened after AirTrain JFK.

AirTrain JFK is free within the terminal area and to the hotel and car rental shuttle buses at Federal Circle. Entering or leaving the system at the Jamaica or Howard Beach costs $5.00.

The fare must be paid by MetroCard, which can be purchased from vending machines at Jamaica and Howard Beach with cash, credit card, or ATM card. The only reduced fee MetroCard for AirTrain JFK is the $40.00 Unlimited Ride one. There are two types of this card. One is valid for one calendar month and the other is valid for thirty days after first use. The JFK-AirTrain 10-Trip MetroCard costs $25.00 and is good for ten JFK Air-Train trips until midnight six months after first use. One trip is deducted for each use and is only accepted on AirTrain JFK.

There have been long desires for rail connection to JFK Airport, which suffers from traffic congestion on its access roads. However, efforts to build a system were slow and the current AirTrain JFK is much smaller than the original plan. The line was to begin in Midtown Manhattan at the foot of the Queensboro Bridge
Queensboro Bridge
The Ed Koch Queensboro Bridge, also known as the 59th Street Bridge – because its Manhattan end is located between 59th and 60th Streets – or simply the Queensboro Bridge, is a cantilever bridge over the East River in New York City that was completed in 1909...
and cross the East River via the side roads, formerly used by trolley cars, on the lower level. It would then use the Sunnyside Yards as a right-of-way towards LaGuardia Airport
LaGuardia Airport
LaGuardia Airport is an airport located in the northern part of Queens County on Long Island in the City of New York. The airport is located on the waterfront of Flushing Bay and Bowery Bay, and borders the neighborhoods of Astoria, Jackson Heights and East Elmhurst. The airport was originally...
. From there, the AirTrain would connect to the LIRR's former Rockaway Beach Branch
Rockaway Beach Branch
The Rockaway Beach Branch was a rail line owned and operated by the Long Island Rail Road in Queens, New York City, United States. The line left the Main Line at Whitepot Junction in Rego Park heading south via Ozone Park and across Jamaica Bay to Hammels in the Rockaways turning west there to a...
, head south to Howard Beach, and then to JFK Airport.

Another suggestion would bypass the LIRR line and instead follow the Grand Central Parkway
Grand Central Parkway
The Grand Central Parkway is a parkway that stretches from the RFK-Triborough Bridge in New York City to Nassau County on Long Island. At the Queens-Nassau border, it becomes the Northern State Parkway, which runs across the northern part of Long Island through Nassau County and into Suffolk...
and Van Wyck Expressway south towards Jamaica, with a station connecting to the IRT Flushing Line
IRT Flushing Line
The Flushing Line is a rapid transit route of the New York City Subway system, operated as part of the IRT Division and designated the 7 route...
. Ultimately, only the portions linking Jamaica and Howard Beach to JFK Airport were approved and built.

Construction of the AirTrain system began in 1998 and service was to begin at the end 2002, but was delayed by the derailment of a test train on September 27, 2002, which resulted in the death of the 23-year-old operator Kelvin DeBourgh, Jr. The system finally opened on December 17, 2003.

The $1.9 billion AirTrain system faced criticism from southeast Queens residents who feared the project could become a boondoggle
Boondoggle
Boondoggle or boon doggle may refer to:* Boondoggle , term for a scheme that wastes time and money* Scoubidou, a knotting and plaiting craft known in the U.S. as "boondoggle"...
, especially after DeBourgh's death. The Port Authority responded to residents' concerns by imposing strict rules regarding disruptive or loud construction activity and implementing a streamlined damage claim process which quickly compensated homeowners who suffered damage to their homes as a result of construction.

The AirTrain is financed in part by a federal Passenger Facility Charge
Airport Improvement Fee
An Airport Improvement Fee or Embarkation Fee or Airport Tax or Service charge or Service fee is an additional fee charged to departing and connecting passengers at an airport. It is levied by government or an airport management corporation and the proceeds are usually intended for funding of major...
revenue (collected as a $5.00 fee on virtually all outbound flight segments), which can be used only for airport-related improvements. The use of this funding required FAA approval. Several airlines challenged the use of the PFC funds for this project and hired a consultant to organize opposition. They also appealed the funding decision in court along with a small number Ozone Park
Ozone Park, Queens
Ozone Park is a working class neighborhood located in the southwestern section of the New York City borough of Queens bordering Woodhaven, Richmond Hill, South Ozone Park, Howard Beach, and City Line, Brooklyn....
residents.

The airlines subsequently withdrew from the lawsuit following negotiations with the Port Authority while the residents continued the legal battle, but lost in court. The Port Authority also contributed $100 million toward the renovation of Jamaica with the state of New York paying for the rest of the $387 million project. The purpose of this renovation was, in part, to facilitate AirTrain connections. The state also spent $75 million to renovate the Howard Beach station, which brought it into ADA compliance and facilitated passengers transfers to and from AirTrain. AirTrain JFK, which is operated by Bombardier as a contractor to the Port Authority, does not receive subsidies from the state or city for its operating costs, which is one of the reasons cited for its relatively high fare.

AirTrain JFK uses the same Advanced Rapid Transit
Bombardier Advanced Rapid Transit
Advanced Rapid Transit or ART is the current name given to a rapid transit system manufactured by Bombardier Transportation. The original versions look like small subway cars that typically run in two-, four- or six-car trains, but the latest versions are more streamlined two-car articulated...
(formerly Intermediate Capacity Transit System) technology from Bombardier
Bombardier Transportation
Bombardier Transportation is the rail equipment division of the Canadian firm, Bombardier Inc. Bombardier Transportation is one of the world's largest companies in the rail-equipment manufacturing and servicing industry. Its headquarters are in Berlin, Germany....
as the SkyTrain
SkyTrain (Vancouver)
SkyTrain is a light rapid transit system in Metro Vancouver, British Columbia, Canada. SkyTrain has of track and uses fully automated trains on grade-separated tracks, running mostly on elevated guideways, which helps SkyTrain to hold consistently high on-time reliability...
in Vancouver, British Columbia and the Kelana Jaya Line
Kelana Jaya Line
The Kelana Jaya Line is a medium-capacity rail transport system and one of the three rail transit lines in the Kuala Lumpur Rail Transit System operated by RapidKL Rail network...
in Kuala Lumpur
Kuala Lumpur
Kuala Lumpur is the capital and the second largest city in Malaysia by population. The city proper, making up an area of , has a population of 1.4 million as of 2010. Greater Kuala Lumpur, also known as the Klang Valley, is an urban agglomeration of 7.2 million...
, Malaysia. It draws power from a third rail
Third rail
A third rail is a method of providing electric power to a railway train, through a semi-continuous rigid conductor placed alongside or between the rails of a railway track. It is used typically in a mass transit or rapid transit system, which has alignments in its own corridors, fully or almost...
and a linear induction motor
Linear induction motor
A linear induction motor is an AC asynchronous linear motor that works by the same general principles as other induction motors but which has been designed to directly produce motion in a straight line....
pushes magnetically against an aluminum strip in the center of the track. The computerized trains are automated and operate without conductors or motormen. The 32 individual vehicles are of the Mark II variant.

The recorded announcements on AirTrain JFK are by New York City traffic reporter Bernie Wagenblast
Bernie Wagenblast
Bernhard Robert Wagenblast is the founder and editor of the Transportation Communications Newsletter , an e-mail publication with over 7,000 subscribers as of January 2008 which is distributed via Yahoo Groups and Google Groups Monday through Friday...
.