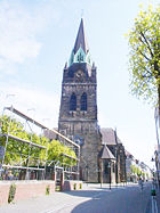 Encyclopedia
Ahlen (ˈaːlən) is a town in North Rhine-Westphalia
North Rhine-Westphalia
North Rhine-Westphalia is the most populous state of Germany, with four of the country's ten largest cities. The state was formed in 1946 as a merger of the northern Rhineland and Westphalia, both formerly part of Prussia. Its capital is Düsseldorf. The state is currently run by a coalition of the...
, Germany. It is part of the District of Warendorf
Warendorf (district)
Warendorf is a Kreis in the northern part of North Rhine-Westphalia, Germany. Neighboring districts are Steinfurt, Osnabrück , Gütersloh, Soest, district-free city Hamm, Coesfeld and the district-free city Münster.-History:...
and is economically the most important town in that district
Districts of Germany
The districts of Germany are known as , except in the states of North Rhine-Westphalia and Schleswig-Holstein where they are known simply as ....
. Ahlen is part of the larger Münster
Münster (region)
Münster is one of the five Regierungsbezirke of North Rhine-Westphalia, Germany, located in the north of the state, and named after the city of Münster. It includes the area which in medieval times was known as the Dreingau....
region
Regierungsbezirk
In Germany, a Government District, in German: Regierungsbezirk – is a subdivision of certain federal states .They are above the Kreise, Landkreise, and kreisfreie Städte...
, and of the historic Münsterland area.
The nearby villages of Dolberg, Vorhelm and Tönnishäuschen
are part of Ahlen, as well. The largest neighboring town is the city of Hamm
Hamm
Hamm is a city in North Rhine-Westphalia , Germany. It is located in the northeastern part of the Ruhr area. As of December 2003 its population was 180,849. The city is situated between the A1 motorway and A2 motorway...
to the southwest.

Ahlen was first uttered in the Vita Liudgeri II in or about the year 850. Grounds for the name Ahlen, which indeed means "eel
Eel
Eels are an order of fish, which consists of four suborders, 20 families, 111 genera and approximately 800 species. Most eels are predators...
s", are unknown. A bedecked eel with a crown and feathers fittingly dons the town's coat of arms
Coat of arms
A coat of arms is a unique heraldic design on a shield or escutcheon or on a surcoat or tabard used to cover and protect armour and to identify the wearer. Thus the term is often stated as "coat-armour", because it was anciently displayed on the front of a coat of cloth...
.
The start of the settlement was likely due to there being a crossing
Crossing (river)
A river crossing is a means to get from one river bank to the other and may refer to:* A ford * A bridge* A tunnel* Any type of Ferry** A cable ferry** A reaction ferry** A water taxi-See also::Category:Crossings by river...
over the river Werse
Werse
The Werse is a 67 km long, left-hand tributary of the River Ems in Münsterland, North Rhine-Westphalia in Germany. The catchment area of the Werse is 762.47 km². Its name may be derived from a pre-Indo-European language, Vasconic, from which the Basque language developed. Its water...
, which was also the crossing of two key roads (Hamm
Hamm
Hamm is a city in North Rhine-Westphalia , Germany. It is located in the northeastern part of the Ruhr area. As of December 2003 its population was 180,849. The city is situated between the A1 motorway and A2 motorway...
–Ahlen–Warendorf
Warendorf
Warendorf is a town in North Rhine-Westphalia, Germany, and capital of Warendorf District.The town is best known today for its well-preserved medieval town centre, for horse-riding, and the opportunities it provides for cycling...
and Beckum
Beckum
Beckum may refer to:* Beckum, Germany, a town in Germany* Beckum, Overijssel, a town in the Netherlands...
–Ahlen–Herbern), and the beginning of a third road (Ahlen–Münster).
In its early centuries
Century
A century is one hundred consecutive years. Centuries are numbered ordinally in English and many other languages .-Start and end in the Gregorian Calendar:...
, the fledgling settlement was built around an episcopal court
Ecclesiastical court
An ecclesiastical court is any of certain courts having jurisdiction mainly in spiritual or religious matters. In the Middle Ages in many areas of Europe these courts had much wider powers than before the development of nation states...
. Within the safe haven of this church fortification
Medieval fortification
Medieval fortification is military methods of Medieval technology that covers the development of fortification construction and use in Europe roughly from the fall of the Western Roman Empire to the Renaissance...
, the first settler
Settler
A settler is a person who has migrated to an area and established permanent residence there, often to colonize the area. Settlers are generally people who take up residence on land and cultivate it, as opposed to nomads...
s were craftsmen and merchants who trade
Trade
Trade is the transfer of ownership of goods and services from one person or entity to another. Trade is sometimes loosely called commerce or financial transaction or barter. A network that allows trade is called a market. The original form of trade was barter, the direct exchange of goods and...
d with the local farmers and peasants of the court.
Long-distance trading started in the second half of the 12th century — proof being the names of Ahlen merchants found on invoices from merchants in Lübeck
Lübeck
The Hanseatic City of Lübeck is the second-largest city in Schleswig-Holstein, in northern Germany, and one of the major ports of Germany. It was for several centuries the "capital" of the Hanseatic League and, because of its Brick Gothic architectural heritage, is listed by UNESCO as a World...
. Ahlen was also part of the north German Hanse. During this time a town wall with five towers was built (about 1271). The stripping away of the town wall had begun in the year 1765 and the last hint of it was gone by 1929.

Ahlen grew quickly during the 13th century and in or about the year 1285, the population was so high that a new church (St. Marien) was founded next to the old one (St. Bartholomäus). This leads to the likelihood that Ahlen was one of the 18 biggest towns in Westphalia
Westphalia
Westphalia is a region in Germany, centred on the cities of Arnsberg, Bielefeld, Dortmund, Minden and Münster.Westphalia is roughly the region between the rivers Rhine and Weser, located north and south of the Ruhr River. No exact definition of borders can be given, because the name "Westphalia"...
, at that time.
However, the town's growth was hindered in the 14th century by the Black Death
Black Death
The Black Death was one of the most devastating pandemics in human history, peaking in Europe between 1348 and 1350. Of several competing theories, the dominant explanation for the Black Death is the plague theory, which attributes the outbreak to the bacterium Yersinia pestis. Thought to have...
. According to the town's census book of 1389, only 63 families were left in Ahlen. But the town rebounded. In 1454, a citizen list showed 212 families living in Ahlen; seven noble families and their attendants
Domestic worker
A domestic worker is a man, woman or child who works within the employer's household. Domestic workers perform a variety of household services for an individual or a family, from providing care for children and elderly dependents to cleaning and household maintenance, known as housekeeping...
lived in the episcopal court as well. Based on this number of families, a calculated population estimate of 1,300 citizens would be realistic. By this time the town had four quarters — all of which being about the same size and each quarter being named after its own town gate.
Each quarter was responsible for defending its part of the town wall and gate.

During the 16th century, there were three plague epidemics in 1505, 1551 and 1592; leprosy
Leprosy
Leprosy or Hansen's disease is a chronic disease caused by the bacteria Mycobacterium leprae and Mycobacterium lepromatosis. Named after physician Gerhard Armauer Hansen, leprosy is primarily a granulomatous disease of the peripheral nerves and mucosa of the upper respiratory tract; skin lesions...
also killed many people. In the year 1571, the mayor
Mayor
In many countries, a Mayor is the highest ranking officer in the municipal government of a town or a large urban city....
and the council
Town council
A town council is a democratically elected form of government for small municipalities or civil parishes. A council may serve as both the representative and executive branch....
decided to build a special hospital for leprosy. Disastrous fires in 1483, 1668 and 1744 were responsible for further halting Ahlen's growth.

About 20 documents of witch trials
Witch trials in Early Modern Europe
The Witch trials in the Early Modern period were a period of witch hunts between the fifteenth and eighteenth centuries, when across Early Modern Europe, and to some extent in the European colonies in North America, there was a widespread hysteria that malevolent Satanic witches were operating as...
during the time from 1574 until 1652 survive. The hunt for witches started in 1574 with the death of four women. Thereafter, Peter Kleikamp was charged with being a werewolf
Werewolf
A werewolf, also known as a lycanthrope , is a mythological or folkloric human with the ability to shapeshift into a wolf or an anthropomorphic wolf-like creature, either purposely or after being placed under a curse...
; he was tortured and burned alive on the pyre
Pyre
A pyre , also known as a funeral pyre, is a structure, usually made of wood, for burning a body as part of a funeral rite...
. In 1616, Christian zum Loe was charged with wizardry; he went insane and died while in jail. The last known case was in 1652 against Anna Sadelers; she was tortured, burned alive on the pyre and beheaded.

Partnerships are set with the following towns:
Ahlen is member of the Hanse.

One of the best known companies in Ahlen is Franz Kaldewei GmbH & Co. KG, one of the biggest bathtub manufacturers worldwide. Also well known is LR Health & Beauty Systems, which was bought by Apax Partners
Apax Partners
Apax Partners LLP is a global private equity and venture capital firm, headquartered in London. The company also operates out of eight other offices in New York, Hong Kong, Mumbai, Tel-Aviv, Madrid, Stockholm, Milan and Munich. The firm, including its various predecessors, have raised...
in 2004.

Ahlen station is on the Hamm–Minden railway and is served every hour by the Westfalen-Express and the Ems-Börde-Bahn.