Encyclopedia
Warendorf is a town in North Rhine-Westphalia
North Rhine-Westphalia
North Rhine-Westphalia is the most populous state of Germany, with four of the country's ten largest cities. The state was formed in 1946 as a merger of the northern Rhineland and Westphalia, both formerly part of Prussia. Its capital is Düsseldorf. The state is currently run by a coalition of the...
, Germany
Germany
Germany , officially the Federal Republic of Germany , is a federal parliamentary republic in Europe. The country consists of 16 states while the capital and largest city is Berlin. Germany covers an area of 357,021 km2 and has a largely temperate seasonal climate...
, and capital of Warendorf District
Warendorf (district)
Warendorf is a Kreis in the northern part of North Rhine-Westphalia, Germany. Neighboring districts are Steinfurt, Osnabrück , Gütersloh, Soest, district-free city Hamm, Coesfeld and the district-free city Münster.-History:...
.

The town is best known today for its well-preserved medieval town centre, for horse-riding
Equestrianism
Equestrianism more often known as riding, horseback riding or horse riding refers to the skill of riding, driving, or vaulting with horses...
, and the opportunities it provides for cycling
Cycling
Cycling, also called bicycling or biking, is the use of bicycles for transport, recreation, or for sport. Persons engaged in cycling are cyclists or bicyclists...
. Bicycles are such a common means of transport in the area that many cycle paths have been built, even alongside main roads outside the town.

The closest large city is Münster
Münster
Münster is an independent city in North Rhine-Westphalia, Germany. It is located in the northern part of the state and is considered to be the cultural centre of the Westphalia region. It is also capital of the local government region Münsterland...
, which is located 30 kilometres west of Warendorf. Other large cities in the area are Osnabrück
Osnabrück
Osnabrück is a city in Lower Saxony, Germany, some 80 km NNE of Dortmund, 45 km NE of Münster, and some 100 km due west of Hanover. It lies in a valley penned between the Wiehen Hills and the northern tip of the Teutoburg Forest...
, approx. 40 kilometres to the north, Bielefeld
Bielefeld
Bielefeld is an independent city in the Ostwestfalen-Lippe Region in the north-east of North Rhine-Westphalia, Germany. With a population of 323,000, it is also the most populous city in the Regierungsbezirk Detmold...
, approx. 45 kilometres to the east, and Hamm
Hamm
Hamm is a city in North Rhine-Westphalia , Germany. It is located in the northeastern part of the Ruhr area. As of December 2003 its population was 180,849. The city is situated between the A1 motorway and A2 motorway...
, approx. 35 kilometres to the south.

Warendorf is twinned
Town twinning
Twin towns and sister cities are two of many terms used to describe the cooperative agreements between towns, cities, and even counties in geographically and politically distinct areas to promote cultural and commercial ties.- Terminology :...
with:

The origin and name Warendorf date back to the ancient Saxon royal court of Warintharpa (“the village on the embankment”), which was most likely already formed in 700 BC. Between the years of 1197 and 1201 Warendorf became a town. During this time, among the already established parish, which belonged to the “old church” (St. Laurentius), a new, second parish with the “new church” (Marienkirche) was formed just west of the town centre. The medieval records of the founding of Warendorf are missing, along with several records and documents in Münster. These were all destroyed during the rule under the Anabaptists. Bishop Hermann II von Katzenelnbogen (Bishop 1173-1202) also contributed to the founding of the town.

In 1224 the first recorded mention of Warendorf as a civitas
Civitas
In the history of Rome, the Latin term civitas , according to Cicero in the time of the late Roman Republic, was the social body of the cives, or citizens, united by law . It is the law that binds them together, giving them responsibilities on the one hand and rights of citizenship on the other...
, which is a civil and municipal community, was made. The wealth of Warendorf grew increasingly and developed more and more into an important trading town, since it is situated favourably between Münster
Münster
Münster is an independent city in North Rhine-Westphalia, Germany. It is located in the northern part of the state and is considered to be the cultural centre of the Westphalia region. It is also capital of the local government region Münsterland...
and Oelde
Oelde
Oelde is a town in the district of Warendorf, in North Rhine-Westphalia, Germany. It is located near Beckum.-Division of the town:Oelde consists of 5 districts:* Oelde* Stromberg* Lette* Sünninghausen* Kirchspiel...
. Apart from that Warendorf profited from the production and selling of linen
Linen
Linen is a textile made from the fibers of the flax plant, Linum usitatissimum. Linen is labor-intensive to manufacture, but when it is made into garments, it is valued for its exceptional coolness and freshness in hot weather....
. The wealthy citizens settled on the market square and in the streets, Emsstrasse and Oststrasse. Still today these areas of the town are most prominent in the townscape of Warendorf. In contrast, the poorer part of population lived in simple houses with dirt floors. These bad living conditions lead to the epidemics and illnesses.

In 1404 there was a great fire in Warendorf, during which along with 600 houses also the “old church” (St. Laurentius) and the town hall with all its inventory were destroyed.

Between 1627 and 1632 loss of the town rights occurred during religious battles of the Thirty Years' War
Thirty Years' War
The Thirty Years' War was fought primarily in what is now Germany, and at various points involved most countries in Europe. It was one of the most destructive conflicts in European history....
. The first mention of the “Fettmarkt” dates back to 1657. This event remained an important funfair with a flea market and livestock market still today. In 1741 another great fire broke out, which resulted in the destruction of the “new church” (Marienkirche) and 332 houses. Because many tradesmen had to move further, and so Warendorf suffered economic loss.

In 1802 Warendorf came under the Prussian sovereignty. The once blossoming town impoverished. In 1826 the establishment of the Westphalian state stud farm
Stud farm
A stud farm or stud in animal husbandry, is an establishment for selective breeding of livestock. The word "stud" comes from the Old English stod meaning "herd of horses, place where horses are kept for breeding" Historically, documentation of the breedings that occur on a stud farm leads to the...
in Warendorf was succeeded by the Prussian stud administration. In 1887 the railroad line Münster – Warendorf – Rheda-Wiedenbrück
Rheda-Wiedenbrück
Rheda-Wiedenbrück is a town in the district of Gütersloh, in North Rhine-Westphalia, Germany.-Geography:Rheda-Wiedenbrück is located on the river Ems, approx. 10 km south-west of Gütersloh.-Neighbouring municipalities:* Oelde* Herzebrock-Clarholz...
was opened. In 1937 barracks were built just north of Warendorf. Today, the sport school of the German army is also located in these barracks.
On 1 January 1975, a reformation of the municipalities was carried out. This reformation integrated the communities of Einen and Milte, and the town of Freckenhorst into the town of Warendorf. Also during this reformation, the larger district of Warendorf (district)
Warendorf (district)
Warendorf is a Kreis in the northern part of North Rhine-Westphalia, Germany. Neighboring districts are Steinfurt, Osnabrück , Gütersloh, Soest, district-free city Hamm, Coesfeld and the district-free city Münster.-History:...
was formed by combining the districts of Warendorf and Beckum. Warendorf became seat of the district government. 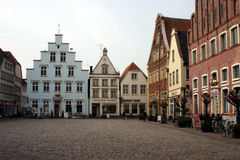 Warendorf has hosted several international events, such as the world skydiving championships, riding events, and the national swimming
Swimming (sport)
Swimming is a sport governed by the Fédération Internationale de Natation .-History: Competitive swimming in Europe began around 1800 BCE, mostly in the form of the freestyle. In 1873 Steve Bowyer introduced the trudgen to Western swimming competitions, after copying the front crawl used by Native...
championships. A notable annual event in Warendorf is the celebration on 15 August of the Feast of the Assumption of the Blessed Virgin Mary (Mariä Himmelfahrt). 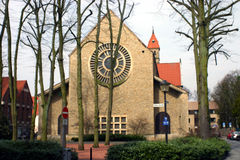