The AgustaWestland AW109 is a light-weight, twin-engine, eight-seat multi-purpose helicopter
Helicopter
A helicopter is a type of rotorcraft in which lift and thrust are supplied by one or more engine-driven rotors. This allows the helicopter to take off and land vertically, to hover, and to fly forwards, backwards, and laterally...
built by the Anglo-Italian manufacturer AgustaWestland
AgustaWestland
AgustaWestland is an Anglo-Italian helicopter design and manufacturing company. It was formed in July 2000 when Finmeccanica S.p.A. and GKN plc agreed to merge their respective helicopter subsidiaries to form AgustaWestland with Finmeccanica and GKN each holding a 50% share.AgustaWestland is now a...
. First flown as the Agusta
Agusta
Agusta is an Italian helicopter manufacturer. It is based in Samarate, Northern Italy. It is a subsidiary of Finmeccanica. The company was founded by Count Giovanni Agusta in 1923, who flew his first airplane in 1907...
A109 in 1971, the craft has proven itself in light transport, medevac
MEDEVAC
Medical evacuation, often termed Medevac or Medivac, is the timely and efficient movement and en route care provided by medical personnel to the wounded being evacuated from the battlefield or to injured patients being evacuated from the scene of an accident to receiving medical facilities using...
, search-and-rescue, and military roles.

The AgustaWestland AW119 Koala is a more economical single-engine variant.

In the late 1960s Agusta
Agusta
Agusta is an Italian helicopter manufacturer. It is based in Samarate, Northern Italy. It is a subsidiary of Finmeccanica. The company was founded by Count Giovanni Agusta in 1923, who flew his first airplane in 1907...
designed the A109 as a single-engined commercial helicopter. It was soon realised that a twin-engined design was needed and it was re-designed in 1969 with two Allison 250-C14 turboshaft engines. A projected military version (the A109B) was not developed and the company concentrated on the eight-seat version the A109C. The first of three prototypes made its maiden flight on 4 August 1971. A protracted development then followed and the first production aircraft was not completed until April 1975. Delivery of production machines started in early 1976. The aircraft soon became a success and was soon used for roles other than as a light transport including as an air ambulance
Air ambulance
An air ambulance is an aircraft used for emergency medical assistance in situations where either a traditional ambulance cannot reach the scene easily or quickly enough, or the patient needs to be transported over a distance or terrain that makes air transportation the most practical transport....
and search-and-rescue. In 1975 Agusta returned again to the possibility of a military version and trials were carried out between 1976 and 1977 with five A109As fitted with Hughes Aircraft
Hughes Aircraft
Hughes Aircraft Company was a major American aerospace and defense contractor founded in 1932 by Howard Hughes in Culver City, California as a division of Hughes Tool Company...
TOW missiles. Two military versions were then developed, one for light attack or close support and another for naval operations.

Fuselages of A109 are made by PZL-Świdnik
PZL-Swidnik
PZL Świdnik S.A is the biggest helicopter manufacturer in Poland. Its main products are PZL W-3 Sokół and PZL SW-4 Puszczyk helicopters...
. In June 2006 the 500th fuselage was delivered by this manufacturer, marking 10 years of co-operation between the two companies.

The sale of the Agusta A109 to the Belgian armed forces in 1988 gave rise to a bribery scandal
Agusta scandal
The Agusta scandal or the Case Agusta-Dassault was a Belgian corruption scandal. It resulted from the purchase of military helicopter of the Agusta A109 Agusta-type by the Belgian Army in 1988, where Agusta and Dassault bribed various office holders...
when it was alleged the company had given the Belgian Socialists over 50 million Belgian francs to get the sale. This scandal led to the resignation and conviction of NATO Secretary General Willy Claes
Willy Claes
Willem Werner Hubert "Willy" Claes was the eighth Secretary General of NATO and a Belgian politician. He was a member of the Flemish Socialist Party....
.

The Agusta A109 became renamed the AW109 following the July 2000 merger of Finmeccanica S.p.A. and GKN plc's respective helicopter subsidiaries Agusta
Agusta
Agusta is an Italian helicopter manufacturer. It is based in Samarate, Northern Italy. It is a subsidiary of Finmeccanica. The company was founded by Count Giovanni Agusta in 1923, who flew his first airplane in 1907...
and Westland Helicopters
Westland Helicopters
Westland Helicopters was a British aerospace company. Originally Westland Aircraft, the company focused on helicopters after the Second World War. It merged with several other British firms in 1961...
to form AgustaWestland.

In August 2008, Scott Kasprowicz and Steve Sheik broke the round-the-world speed record using a factory-standard AgustaWestland Grand, with a time of 11 days, 7 hours and 2 minutes. The A109S Grand is also the fastest helicopter from New York
New York
New York is a state in the Northeastern region of the United States. It is the nation's third most populous state. New York is bordered by New Jersey and Pennsylvania to the south, and by Connecticut, Massachusetts and Vermont to the east...
to Los Angeles
Los Ángeles
Los Ángeles is the capital of the province of Biobío, in the commune of the same name, in Region VIII , in the center-south of Chile. It is located between the Laja and Biobío rivers. The population is 123,445 inhabitants...
.

The AW109 has been popular with many air charter companies and other small operators. Major fleet operators have included: 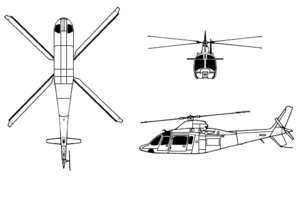