Encyclopedia
The adrenergic receptors (or adrenoceptors) are a class of metabotropic G protein-coupled receptor
G protein-coupled receptor
G protein-coupled receptors , also known as seven-transmembrane domain receptors, 7TM receptors, heptahelical receptors, serpentine receptor, and G protein-linked receptors , comprise a large protein family of transmembrane receptors that sense molecules outside the cell and activate inside signal...
s that are targets of the catecholamine
Catecholamine
Catecholamines are molecules that have a catechol nucleus consisting of benzene with two hydroxyl side groups and a side-chain amine. They include dopamine, as well as the "fight-or-flight" hormones adrenaline and noradrenaline released by the adrenal medulla of the adrenal glands in response to...
s, especially noradrenaline (norepinephrine) and adrenaline (epinephrine).
Although dopamine
Dopamine
Dopamine is a catecholamine neurotransmitter present in a wide variety of animals, including both vertebrates and invertebrates. In the brain, this substituted phenethylamine functions as a neurotransmitter, activating the five known types of dopamine receptors—D1, D2, D3, D4, and D5—and their...
is a catecholamine, its receptors are in a different category.

Many cells possess these receptors, and the binding of an agonist
Agonist
An agonist is a chemical that binds to a receptor of a cell and triggers a response by that cell. Agonists often mimic the action of a naturally occurring substance...
will generally cause a sympathetic (or sympathomimetic) response (e.g. the fight-or-flight response
Fight-or-flight response
The fight-or-flight response was first described by Walter Bradford Cannon....
). For instance, the heart rate
Heart rate
Heart rate is the number of heartbeats per unit of time, typically expressed as beats per minute . Heart rate can vary as the body's need to absorb oxygen and excrete carbon dioxide changes, such as during exercise or sleep....
will increase and the pupil
Pupil
The pupil is a hole located in the center of the iris of the eye that allows light to enter the retina. It appears black because most of the light entering the pupil is absorbed by the tissues inside the eye. In humans the pupil is round, but other species, such as some cats, have slit pupils. In...
s will dilate, energy will be mobilized, and blood flow diverted from other non-essential organs to skeletal muscle
Skeletal muscle
Skeletal muscle is a form of striated muscle tissue existing under control of the somatic nervous system- i.e. it is voluntarily controlled. It is one of three major muscle types, the others being cardiac and smooth muscle...
.

There are two main groups of adrenergic receptors, α and β, with several subtypes. 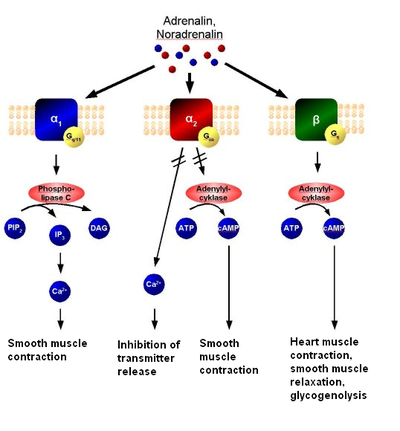 †There is no α1C receptor. At one time, there was a subtype known as C, but was found to be identical to one of the previously discovered subtypes. To avoid confusion, naming was continued with the letter D.

Alpha1-adrenergic receptors are members of the G protein-coupled receptor superfamily. Upon activation, a heterotrimeric G protein, Gq, activates phospholipase C (PLC
Phospholipase C
Phosphoinositide phospholipase C is a family of eukaryotic intracellular enzymes that play an important role in signal transduction processes. In general, this enzyme is denoted as Phospholipase C, although three other families of phospholipase C enzymes have been identified in bacteria and in...
). The PLC cleaves phosphatidylinositol 4,5-bisphosphate
Phosphatidylinositol 4,5-bisphosphate
Phosphatidylinositol 4,5-bisphosphate or PtdInsP2, also known simply as PIP2, is a minor phospholipid component of cell membranes...
(PIP2), which in turn causes an increase in inositol triphosphate
Inositol triphosphate
Inositol trisphosphate or inositol 1,4,5-trisphosphate , together with diacylglycerol , is a secondary messenger molecule used in signal transduction and lipid signaling in biological cells. While DAG stays inside the membrane, IP3 is soluble and diffuses through the cell...
(IP3) and diacylglycerol (DAG). The former interacts with calcium channels of endoplasmic and sarcoplasmic reticulum, thus changing the calcium content in a cell. This triggers all other effects.

Specific actions of the α1 receptor mainly involve smooth muscle contraction. It causes vasoconstriction
Vasoconstriction
Vasoconstriction is the narrowing of the blood vessels resulting from contraction of the muscular wall of the vessels, particularly the large arteries, small arterioles and veins. The process is the opposite of vasodilation, the widening of blood vessels. The process is particularly important in...
in many blood vessels, including those of the skin
Skin
-Dermis:The dermis is the layer of skin beneath the epidermis that consists of connective tissue and cushions the body from stress and strain. The dermis is tightly connected to the epidermis by a basement membrane. It also harbors many Mechanoreceptors that provide the sense of touch and heat...
, gastrointestinal system, kidney
Kidney
The kidneys, organs with several functions, serve essential regulatory roles in most animals, including vertebrates and some invertebrates. They are essential in the urinary system and also serve homeostatic functions such as the regulation of electrolytes, maintenance of acid–base balance, and...
(renal artery
Renal artery
The renal arteries normally arise off the side of the abdominal aorta, immediately below the superior mesenteric artery, and supply the kidneys with blood. Each is directed across the crus of the diaphragm, so as to form nearly a right angle with the aorta....
) and brain
Brain
The brain is the center of the nervous system in all vertebrate and most invertebrate animals—only a few primitive invertebrates such as sponges, jellyfish, sea squirts and starfishes do not have one. It is located in the head, usually close to primary sensory apparatus such as vision, hearing,...
. Other areas of smooth muscle contraction are:

Further effects include glycogenolysis
Glycogenolysis
Glycogenolysis is the conversion of glycogen polymers to glucose monomers. Glycogen is catabolized by removal of a glucose monomer through cleavage with inorganic phosphate to produce glucose-1-phosphate...
and gluconeogenesis
Gluconeogenesis
Gluconeogenesis is a metabolic pathway that results in the generation of glucose from non-carbohydrate carbon substrates such as lactate, glycerol, and glucogenic amino acids....
from adipose tissue
Adipose tissue
In histology, adipose tissue or body fat or fat depot or just fat is loose connective tissue composed of adipocytes. It is technically composed of roughly only 80% fat; fat in its solitary state exists in the liver and muscles. Adipose tissue is derived from lipoblasts...
and liver
Liver
The liver is a vital organ present in vertebrates and some other animals. It has a wide range of functions, including detoxification, protein synthesis, and production of biochemicals necessary for digestion...
, as well as secretion from sweat gland
Sweat gland
Sweat glands, or sudoriferous glands, are small tubular structures of the skin that produce sweat. There are two kinds of sweat glands:...
s and Na+
Sodium
Sodium is a chemical element with the symbol Na and atomic number 11. It is a soft, silvery-white, highly reactive metal and is a member of the alkali metals; its only stable isotope is 23Na. It is an abundant element that exists in numerous minerals, most commonly as sodium chloride...
reabsorption from kidney
Kidney
The kidneys, organs with several functions, serve essential regulatory roles in most animals, including vertebrates and some invertebrates. They are essential in the urinary system and also serve homeostatic functions such as the regulation of electrolytes, maintenance of acid–base balance, and...
.

Specific actions of the α2 receptor include:

Specific actions of the β1 receptor include:

Specific actions of the β2 receptor include the following:

Specific actions of the β3 receptor include: