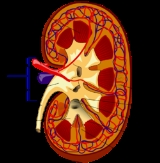 Ureters are also found in all other amniote
Amniote
The amniotes are a group of tetrapods that have a terrestrially adapted egg. They include synapsids and sauropsids , as well as their fossil ancestors. Amniote embryos, whether laid as eggs or carried by the female, are protected and aided by several extensive membranes...
species, although different ducts fulfill the same role in amphibian
Amphibian
Amphibians , are a class of vertebrate animals including animals such as toads, frogs, caecilians, and salamanders. They are characterized as non-amniote ectothermic tetrapods...
s and fish
Fish
Fish are a paraphyletic group of organisms that consist of all gill-bearing aquatic vertebrate animals that lack limbs with digits. Included in this definition are the living hagfish, lampreys, and cartilaginous and bony fish, as well as various extinct related groups...
.

The ureter is sometimes injured in hysterectomies near the infundibulopelvic (suspensory) ligament or where the ureter courses posterior to the uterine vessels
Uterine artery
-Structure:The uterine artery usually arises from the anterior division of the internal iliac artery. It travels to the uterus, crossing the ureter anteriorly, reaching the uterus by traveling in the cardinal ligament....
.