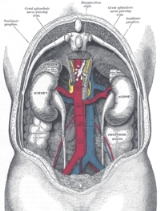 Encyclopedia
The renal arteries normally arise off the side of the abdominal aorta
Abdominal aorta
The abdominal aorta is the largest artery in the abdominal cavity. As part of the aorta, it is a direct continuation of the descending aorta .-Path:...
, immediately below the superior mesenteric artery
Superior mesenteric artery
In human anatomy, the superior mesenteric artery arises from the anterior surface of the abdominal aorta, just inferior to the origin of the celiac trunk, and supplies the intestine from the lower part of the duodenum through two-thirds of the transverse colon, as well as the pancreas.-Location...
, and supply the kidney
Kidney
The kidneys, organs with several functions, serve essential regulatory roles in most animals, including vertebrates and some invertebrates. They are essential in the urinary system and also serve homeostatic functions such as the regulation of electrolytes, maintenance of acid–base balance, and...
s with blood
Blood
Blood is a specialized bodily fluid in animals that delivers necessary substances such as nutrients and oxygen to the cells and transports metabolic waste products away from those same cells....
. Each is directed across the crus of the diaphragm, so as to form nearly a right angle with the aorta.

The arterial supply of the kidneys is variable and there may be one or more renal arteries supplying each kidney. It is located above the renal vein. Supernumerary renal arteries(two or more arteries to a single kidney) are the most common renovascular anomaly, occurrence ranging from 25% to 40% of kidneys.

Before reaching the hilus of the kidney
Hilum of kidney
The renal hilum or renal pedicle of the kidney is the recessed central fissure. The medial border of the kidney is concave in the center and convex toward either extremity; it is directed forward and a little downward. Its central part presents a deep longitudinal fissure, bounded by prominent...
, each artery divides into four or five branches; the greater number of these (anterior branches) lie between the renal vein and ureter
Ureter
In human anatomy, the ureters are muscular tubes that propel urine from the kidneys to the urinary bladder. In the adult, the ureters are usually long and ~3-4 mm in diameter....
, the vein being in front, the ureter behind, but one or more branches (posterior branches) are usually situated behind the ureter.

Each vessel gives off some small inferior suprarenal branches to the suprarenal gland, the ureter
Ureter
In human anatomy, the ureters are muscular tubes that propel urine from the kidneys to the urinary bladder. In the adult, the ureters are usually long and ~3-4 mm in diameter....
, and the surrounding cellular tissue and muscles.

One or two accessory renal arteries are frequently found, especially on the left side since they usually arise from the aorta, and may come off above (more common) or below the main artery. Instead of entering the kidney at the hilus, they usually pierce the upper or lower part of the organ.


Diseases of the renal arteries