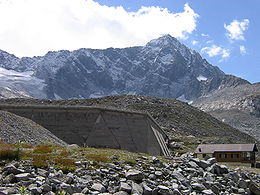 The Adamello-Presanella Alpine group is a mountain range
Mountain range
A mountain range is a single, large mass consisting of a succession of mountains or narrowly spaced mountain ridges, with or without peaks, closely related in position, direction, formation, and age; a component part of a mountain system or of a mountain chain...
in the Italian
Italy
Italy , officially the Italian Republic languages]] under the European Charter for Regional or Minority Languages. In each of these, Italy's official name is as follows:;;;;;;;;), is a unitary parliamentary republic in South-Central Europe. To the north it borders France, Switzerland, Austria and...
Alps
Alps
The Alps is one of the great mountain range systems of Europe, stretching from Austria and Slovenia in the east through Italy, Switzerland, Liechtenstein and Germany to France in the west....
. It is part of the Southern Limestone Alps
Southern Limestone Alps
The Southern Limestone Alps are the ranges of the Eastern Alps south of the Central Eastern Alps mainly located in northern Italy and the adjacent lands of Austria and Slovenia. The distinction from the Central Alps, where the higher peaks are located, is based on differences in geological...
. It is located in the provinces of Trentino and Brescia. The name stems from its highest peaks: Adamello and Presanella
Presanella
Presanella is a mountain in the Adamello-Presanella range of the Italian Alps of northern Italy....
.

The Adamello-Presanella Group is separated from the Ortler Alps
Ortler Alps
The Ortler Alps are a mountain range in the central Alps of Italy. They are considered to be part of the Central Eastern Alps or the Southern Limestone Alps....
in the north by the Tonale Pass
Tonale Pass
Tonale Pass is a high mountain pass in northern Italy across the Rhaetian Alps, between Lombardy and Trentino.It connects Valcamonica and Val di Sole...
; from the Bergamo Alps
Bergamo Alps
The Bergamo Alps are a mountain range in the Italian Alps which forms part of the Central Eastern Alps. They are located in northern Lombardy and named after the city Bergamo, south of the mountains....
in the west by the Oglio
Oglio
The Oglio is a left-side tributary of the Po River in Lombardy, Italy. It is 280 km long....
valley (Val Camonica); from the Brenta Group
Brenta Group
The Brenta Group is a mountain range of the Rhaetian Alps. It is located in the Italian province of Trentino.The Brenta Group is separated from the Ortler Alps in the north by the Noce valley; from the Adamello-Presanella group in the west by the Campo Carlo Magno Pass and the river Sarca; from...
in the east by the Campo Carlo Magno
Campo Carlo Magno
Campo Carlo Magno is a pass in the Adamello-Brenta mountain region in Italy.It connects the Val Rendena and the Val di Sole. To the west of the pass are the Adamello-Presanella mountains, to the east the Brenta Dolomites....
Pass and the river Sarca
Sarca
The Sarca is a river springing from the Adamello-Presanella mountains in the Italian Alps and flowing into Lake Garda in Northern Italy. As an emissary of the lake it becomes known as the Mincio....
; to the south it continues towards Lake Iseo
Lake Iseo
Lake Iseo or Lago d'Iseo or Sebino is the fourth largest lake in Lombardy, Italy, fed by the Oglio river.It is in the north of the country in the Val Camonica area, near the cities of Brescia and Bergamo. The lake is almost equally divided between the Provinces of Bergamo and Brescia...
.

The main peaks of the Adamello-Presanella Group are:

The main mountain pass
Mountain pass
A mountain pass is a route through a mountain range or over a ridge. If following the lowest possible route, a pass is locally the highest point on that route...
es of the Adamello-Presanella Group are: