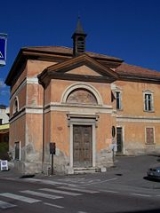 Cles ' onMouseout='HidePop("498")' href="/topics/Nones_language">Nones
Nones language
Nones is a language named after and spoken in the Non Valley in Trentino, northern Italy. It is estimated that around 30,000 persons speak it.Some linguists argue that it is a dialect of the Ladin language, since it shares many similarities...
: Clés) is a town and comune in Trentino, in the Trentino-Alto Adige/Südtirol region of northern Italy
Italy
Italy , officially the Italian Republic languages]] under the European Charter for Regional or Minority Languages. In each of these, Italy's official name is as follows:;;;;;;;;), is a unitary parliamentary republic in South-Central Europe. To the north it borders France, Switzerland, Austria and...
.

The Tabula clesiana is a bronze plate size cm. 49.9 x 37.8 x 0.61, discovered in 1869 at Campi Neri near Cles. It contains the edict of the Caesar
Caesar (title)
Caesar is a title of imperial character. It derives from the cognomen of Julius Caesar, the Roman dictator...
Claudius
Claudius
Claudius , was Roman Emperor from 41 to 54. A member of the Julio-Claudian dynasty, he was the son of Drusus and Antonia Minor. He was born at Lugdunum in Gaul and was the first Roman Emperor to be born outside Italy...
of 46 AD which granted the Roman citizenship to the Alpine peoples of the Anauni, Sinduni and Tulliasses. It is actually conserved at the Castello del Buonconsiglio Museum in Trento
Trento
Trento is an Italian city located in the Adige River valley in Trentino-Alto Adige/Südtirol. It is the capital of Trentino...
.

The Tabula is an important evidence of the rapid assimilation by the Roman world of the Alpine peoples of farmers-hunters but also from the point of view of the Roman law
Roman law
Roman law is the legal system of ancient Rome, and the legal developments which occurred before the 7th century AD — when the Roman–Byzantine state adopted Greek as the language of government. The development of Roman law comprises more than a thousand years of jurisprudence — from the Twelve...
the first evidence of the introduction of delatores in the fiscal controversy.
The source of this article is wikipedia, the free encyclopedia.  The text of this article is licensed under the GFDL.