Encyclopedia
Tonale Pass (el. 1883 m./6178 ft.) is a high mountain pass
Mountain pass
A mountain pass is a route through a mountain range or over a ridge. If following the lowest possible route, a pass is locally the highest point on that route...
in northern Italy
Italy
Italy , officially the Italian Republic languages]] under the European Charter for Regional or Minority Languages. In each of these, Italy's official name is as follows:;;;;;;;;), is a unitary parliamentary republic in South-Central Europe. To the north it borders France, Switzerland, Austria and...
across the Rhaetian Alps
Rhaetian Alps
The Rhaetian Alps are a part of the Central Eastern Alps along the Italian–Swiss and Austrian–Swiss borders, mostly located in the Graubünden canton in eastern Switzerland.Piz Bernina , set on the Italian border, is the highest peak....
, between Lombardy
Lombardy
Lombardy is one of the 20 regions of Italy. The capital is Milan. One-sixth of Italy's population lives in Lombardy and about one fifth of Italy's GDP is produced in this region, making it the most populous and richest region in the country and one of the richest in the whole of Europe...
and Trentino.

It connects Valcamonica and Val di Sole
Val di Sole
The Sole Valley is a valley in Trentino, northern Italy.Sole Valley applies to the Vermiglio Valley, the east-west aligned valley of the river Noce and its sidevalleys, among which the Peio Valley that heads to the Ortler...
. It is delimited by the Ortler Alps
Ortler Alps
The Ortler Alps are a mountain range in the central Alps of Italy. They are considered to be part of the Central Eastern Alps or the Southern Limestone Alps....
to the north and the Adamello range to the south.

The pass plays host to many hotels and shops for tourists in the winter, as the land around the pass is used for winter sports - mainly skiing
Skiing
Skiing is a recreational activity using skis as equipment for traveling over snow. Skis are used in conjunction with boots that connect to the ski with use of a binding....
(see Adamello Ski Raid
Adamello Ski Raid
The Adamello Ski Raid is an annual ski mountaineering competition at the Italian Tonale Pass declared as the final race of the European Cup of Ski Mountaineering by the International Council for Ski Mountaineering Competitions ....
) and snowboarding
Snowboarding
Snowboarding is a sport that involves descending a slope that is covered with snow on a snowboard attached to a rider's feet using a special boot set onto mounted binding. The development of snowboarding was inspired by skateboarding, sledding, surfing and skiing. It was developed in the U.S.A...
. 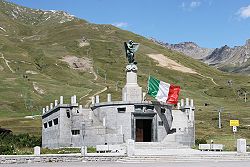