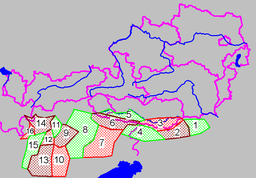 The Southern Alps are a distinct physiographic section of the larger Alps
Alps
The Alps is one of the great mountain range systems of Europe, stretching from Austria and Slovenia in the east through Italy, Switzerland, Liechtenstein and Germany to France in the west....
province, which in turn is part of the larger Alpine System physiographic division.
The source of this article is wikipedia, the free encyclopedia.  The text of this article is licensed under the GFDL.