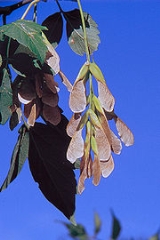 Encyclopedia
Acer negundo is a species of maple
Maple
Acer is a genus of trees or shrubs commonly known as maple.Maples are variously classified in a family of their own, the Aceraceae, or together with the Hippocastanaceae included in the family Sapindaceae. Modern classifications, including the Angiosperm Phylogeny Group system, favour inclusion in...
native to North America
North America
North America is a continent wholly within the Northern Hemisphere and almost wholly within the Western Hemisphere. It is also considered a northern subcontinent of the Americas...
. Box Elder, Boxelder Maple, and Maple Ash are its most common names in the United States. Other variant names, some of which are regional, include: Ash Maple, Ash-leaf Maple, Black Ash, California Boxelder, Cutleaf Maple, Cut-leaved Maple, Negundo Maple, Red River Maple, Stinking Ash, Sugar Ash, Three-leaved Maple, and Western Boxelder. In Canada
Canada
Canada is a North American country consisting of ten provinces and three territories. Located in the northern part of the continent, it extends from the Atlantic Ocean in the east to the Pacific Ocean in the west, and northward into the Arctic Ocean...
it is commonly known as Manitoba Maple and occasionally as Elf Maple. In Russia
Russia
Russia or , officially known as both Russia and the Russian Federation , is a country in northern Eurasia. It is a federal semi-presidential republic, comprising 83 federal subjects...
it is called American Maple as well as Ash-leaf Maple .

Acer negundo is a small, usually fast-growing and fairly short-lived tree
Tree
A tree is a perennial woody plant. It is most often defined as a woody plant that has many secondary branches supported clear of the ground on a single main stem or trunk with clear apical dominance. A minimum height specification at maturity is cited by some authors, varying from 3 m to...
that grows up to 10–25 m (32.8–82 ft) tall, with a trunk diameter of 30–50 cm (11.8–19.7 in), rarely up to 1 metres (3.3 ft) diameter. It often has several trunks and can form impenetrable thickets.

The shoots are green, often with a whitish to pink or violet wax
Wax
thumb|right|[[Cetyl palmitate]], a typical wax ester.Wax refers to a class of chemical compounds that are plastic near ambient temperatures. Characteristically, they melt above 45 °C to give a low viscosity liquid. Waxes are insoluble in water but soluble in organic, nonpolar solvents...
y coating when young. Branches are smooth, somewhat brittle, and tend to retain a fresh green colour rather than forming a bark
Bark
Bark is the outermost layers of stems and roots of woody plants. Plants with bark include trees, woody vines and shrubs. Bark refers to all the tissues outside of the vascular cambium and is a nontechnical term. It overlays the wood and consists of the inner bark and the outer bark. The inner...
of dead, protective tissue. The bark on its trunks is pale gray or light brown, deeply cleft into broad ridges, and scaly.

The leaflets are about 5–10 cm (2–3.9 in) long and 3–7 cm (1.2–2.8 in) wide with slightly serrate margins. Leafs have a translucent light green colour and turn yellow in the fall
Autumn
Autumn is one of the four temperate seasons. Autumn marks the transition from summer into winter usually in September or March when the arrival of night becomes noticeably earlier....
.

The flower
Flower
A flower, sometimes known as a bloom or blossom, is the reproductive structure found in flowering plants . The biological function of a flower is to effect reproduction, usually by providing a mechanism for the union of sperm with eggs...
s are small and appear in early spring on drooping raceme
Raceme
A raceme is a type of inflorescence that is unbranched and indeterminate and bears pedicellate flowers — flowers having short floral stalks called pedicels — along the axis. In botany, axis means a shoot, in this case one bearing the flowers. In a raceme, the oldest flowers are borne...
s 10–20 cm (3.9–7.9 in) long. The seed
Seed
A seed is a small embryonic plant enclosed in a covering called the seed coat, usually with some stored food. It is the product of the ripened ovule of gymnosperm and angiosperm plants which occurs after fertilization and some growth within the mother plant...
s are paired samara
Samara (fruit)
A samara is a type of fruit in which a flattened wing of fibrous, papery tissue develops from the ovary wall. A samara is a simple dry fruit and indehiscent . It is a winged achene...
s, each seed slender, 1–2 cm (0.393700787401575–0.78740157480315 in) long, with a 2–3 cm (0.78740157480315–1.2 in) incurved wing; they drop in autumn or they may persist through winter. Seeds are usually both prolific and fertile
Fertile
The term fertile describes a condition whereby organisms are able to produce physically healthy offspring.Fertile may also refer to:...
.

Indicative of its familiarity to many people over a large geographic range, A. negundo has numerous common names.

Other common names are based upon this maple's similarity to ash, its preferred environment, its sugary sap
Maple syrup
Maple syrup is a syrup usually made from the xylem sap of sugar maple, red maple, or black maple trees, although it can also be made from other maple species such as the bigleaf maple. In cold climates, these trees store starch in their trunks and roots before the winter; the starch is then...
, a description of its leaves, its binomial name, and so on. These names include (but are not limited to) Ash-, Cut-, or Three-leaf (or -leaved) Maple; Ash Maple; Sugar Ash; Negundo Maple; and River Maple.

Common names may also designate a particular subspecies
Subspecies
Subspecies in biological classification, is either a taxonomic rank subordinate to species, ora taxonomic unit in that rank . A subspecies cannot be recognized in isolation: a species will either be recognized as having no subspecies at all or two or more, never just one...
. For example, a common name for A. negundo subsp. interius may be preceded by "Inland" (as in "Inland Boxelder Maple"). A common name for A. negundo subsp. californicum may be preceded by "California" or "Western". 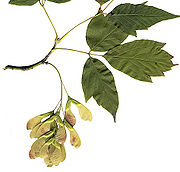 Acer negundo is often discussed as comprising three subspecies, each of which was originally described as a separate species. These are:


Some authors further subdivide subsp. negundo into a number of regional varieties but these intergrade and their maintenance as distinct taxa is disputed by many. Even the differences between recognized subspecies are probably a matter of gradient speciation
Speciation
Speciation is the evolutionary process by which new biological species arise. The biologist Orator F. Cook seems to have been the first to coin the term 'speciation' for the splitting of lineages or 'cladogenesis,' as opposed to 'anagenesis' or 'phyletic evolution' occurring within lineages...

Finally, note that a few botanists treat Boxelder Maple as its own distinct genus (Negundo aceroides) but this is not widely accepted.

As noted, varieties thrive across the United States
United States
The United States of America is a federal constitutional republic comprising fifty states and a federal district...
and Canada
Canada
Canada is a North American country consisting of ten provinces and three territories. Located in the northern part of the continent, it extends from the Atlantic Ocean in the east to the Pacific Ocean in the west, and northward into the Arctic Ocean...
. It may also be found as far south as Guatemala
Guatemala
Guatemala is a country in Central America bordered by Mexico to the north and west, the Pacific Ocean to the southwest, Belize to the northeast, the Caribbean to the east, and Honduras and El Salvador to the southeast...

This species prefers bright sunlight. It often grows on flood plains and other disturbed areas with ample water supply, such as riparian habitats. Human influence has greatly favoured this species; it grows around houses and in hedges, as well as on disturbed ground and vacant lots.

Several bird
Bird
Birds are feathered, winged, bipedal, endothermic , egg-laying, vertebrate animals. Around 10,000 living species and 188 families makes them the most speciose class of tetrapod vertebrates. They inhabit ecosystems across the globe, from the Arctic to the Antarctic. Extant birds range in size from...
s and some squirrel
Squirrel
Squirrels belong to a large family of small or medium-sized rodents called the Sciuridae. The family includes tree squirrels, ground squirrels, chipmunks, marmots , flying squirrels, and prairie dogs. Squirrels are indigenous to the Americas, Eurasia, and Africa and have been introduced to Australia...
s feed on the seeds. The Evening Grosbeak
Evening Grosbeak
The Evening Grosbeak is a large finch. In the past, it was treated in a genus of its own as Hesperiphona vespertina, but is now usually placed in the same genus as the Hawfinch of Eurasia....
uses them extensively. The Maple Bug
Maple bug
Boisea trivittata is a North American species of true bug, commonly known as the box elder bug, the zug, or maple bug. It is found primarily on boxelder trees, as well as maple and ash trees...
(also known as the Boxelder Bug) lays its eggs
Egg (biology)
An egg is an organic vessel in which an embryo first begins to develop. In most birds, reptiles, insects, molluscs, fish, and monotremes, an egg is the zygote, resulting from fertilization of the ovum, which is expelled from the body and permitted to develop outside the body until the developing...
on all maples, but prefers this species.

Although its weak wood, irregular form, and prolific seeding might make it seem like a poor choice for a landscape tree, A. negundo is one of the most common maples in cultivation and many interesting cultivar
Cultivar
A cultivar'Cultivar has two meanings as explained under Formal definition. When used in reference to a taxon, the word does not apply to an individual plant but to all those plants sharing the unique characteristics that define the cultivar. is a plant or group of plants selected for desirable...
s have been developed, including:

There is some commercial use of the tree for various decorative applications, such as turned items (bowls, stem-ware, pens). Primarily burl wood and injured wood, where the primary reason is this wood's reaction to injury, where the injured wood develops a red stain.

Acer negundo was identified in 1959 as the material used in the oldest extant flutes from the Americas that were made of wood. These early artifacts, excavated by Earl H. Morris in 1931 in the Prayer Rock district of present-day NorthEastern Arizona, have been dated to 620-670 CE.

The style of these flutes, now known as Anasazi flutes
Anasazi flute
The Anasazi flute is the name of a pre-historic end-blown flute replicated today from findings at a massive cave in Prayer Rock Valley in Arizona, USA by an archaeological expedition led by Earl H. Morris in 1931...
, uses an open tube and a splitting edge at one end. This design pre-dates the earliest known Native American Flute
Native American flute
The Native American flute has achieved some measure of fame for its distinctive sound, used in a variety of New Age and world music recordings. The instrument was originally very personal; its music was played without accompaniment in courtship, healing, meditation, and spiritual rituals. Now it...
(which use a two-chambered design) by 1,200 years.