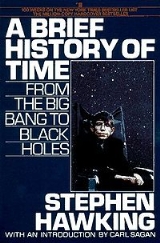 Encyclopedia
A Brief History of Time (subtitled "From the Big Bang to Black Holes") is a popular science
Popular science
Popular science, sometimes called literature of science, is interpretation of science intended for a general audience. While science journalism focuses on recent scientific developments, popular science is broad-ranging, often written by scientists as well as journalists, and is presented in many...
book
Book
A book is a set or collection of written, printed, illustrated, or blank sheets, made of hot lava, paper, parchment, or other materials, usually fastened together to hinge at one side. A single sheet within a book is called a leaf or leaflet, and each side of a leaf is called a page...
written by renown physicist
Physics
Physics is a natural science that involves the study of matter and its motion through spacetime, along with related concepts such as energy and force. More broadly, it is the general analysis of nature, conducted in order to understand how the universe behaves.Physics is one of the oldest academic...
Stephen Hawking
Stephen Hawking
Stephen William Hawking, CH, CBE, FRS, FRSA is an English theoretical physicist and cosmologist, whose scientific books and public appearances have made him an academic celebrity...
and first published by the Bantam Dell Publishing Group
Bantam Books
Bantam Books is an American publishing house owned entirely by Random House, the German media corporation subsidiary of Bertelsmann; it is an imprint of the Random House Publishing Group. It was formed in 1945 by Walter B. Pitkin, Jr., Sidney B. Kramer, and Ian and Betty Ballantine...
in 1988. It became a best-seller and has sold more than 10 million copies. It was also on the London Sunday Times best-seller list for more than four years.

A Brief History of Time attempts to explain a range of subjects in cosmology
Physical cosmology
Physical cosmology, as a branch of astronomy, is the study of the largest-scale structures and dynamics of the universe and is concerned with fundamental questions about its formation and evolution. For most of human history, it was a branch of metaphysics and religion...
, including the Big Bang
Big Bang
The Big Bang theory is the prevailing cosmological model that explains the early development of the Universe. According to the Big Bang theory, the Universe was once in an extremely hot and dense state which expanded rapidly. This rapid expansion caused the young Universe to cool and resulted in...
, black hole
Black hole
A black hole is a region of spacetime from which nothing, not even light, can escape. The theory of general relativity predicts that a sufficiently compact mass will deform spacetime to form a black hole. Around a black hole there is a mathematically defined surface called an event horizon that...
s and light cone
Light cone
A light cone is the path that a flash of light, emanating from a single event and traveling in all directions, would take through spacetime...
s, to the nonspecialist reader. Its main goal is to give an overview of the subject but, unusual for a popular science book, it also attempts to explain some complex mathematics
Mathematics
Mathematics is the study of quantity, space, structure, and change. Mathematicians seek out patterns and formulate new conjectures. Mathematicians resolve the truth or falsity of conjectures by mathematical proofs, which are arguments sufficient to convince other mathematicians of their validity...
.

The author notes that an editor warned him that for every equation
Equation
An equation is a mathematical statement that asserts the equality of two expressions. In modern notation, this is written by placing the expressions on either side of an equals sign , for examplex + 3 = 5\,asserts that x+3 is equal to 5...
in the book the readership would be halved, hence it includes only a single equation: E = mc2. In addition to Hawking's notable abstention from presenting equations, the book also simplifies matters by means of illustrations throughout the text, depicting complex models and diagrams.

The book ends with: "If we find [a unified theory], it would be the ultimate triumph — for then we would know the mind of God."

The Introduction was removed after the first edition, as it was copyright
Copyright
Copyright is a legal concept, enacted by most governments, giving the creator of an original work exclusive rights to it, usually for a limited time...
ed by Sagan, rather than by Hawking or the publisher, and the publisher did not have the right to reprint it forever. Hawking wrote his own introduction for later editions.

In 1991
1991 in film
The year 1991 in film involved some significant events.-Events:*April 28 - Bonnie Raitt marries actor Michael O'Keefe in New York* Terminator 2: Judgment Day, became one of the landmarks for science fiction action films with its groundbreaking visual effects from Industrial Light & Magic.*November...
, Errol Morris
Errol Morris
Errol Mark Morris is an American director. In 2003, The Guardian put him seventh in its list of the world's 40 best directors. Also in 2003, his film The Fog of War: Eleven Lessons from the Life of Robert S. McNamara won the Academy Award for Best Documentary Feature.-Early life and...
directed a documentary film
Documentary film
Documentary films constitute a broad category of nonfictional motion pictures intended to document some aspect of reality, primarily for the purposes of instruction or maintaining a historical record...
about Hawking, but although they share a title, the film is a biographical
Biography
A biography is a detailed description or account of someone's life. More than a list of basic facts , biography also portrays the subject's experience of those events...
study of Hawking, and not a filmed version of the book.

The New York's Metropolitan Opera
Metropolitan Opera
The Metropolitan Opera is an opera company, located in New York City. Originally founded in 1880, the company gave its first performance on October 22, 1883. The company is operated by the non-profit Metropolitan Opera Association, with Peter Gelb as general manager...
has commissioned an opera to premiere in 2015-16 based on Hawking's book. It will be composed by Osvaldo Golijov
Osvaldo Golijov
Osvaldo Noé Golijov is a Grammy award–winning composer of classical music.-Biography:Osvaldo Golijov was born in and grew up in La Plata, Argentina, in a Jewish family that had emigrated to Argentina in the 1920s from Romania and Russia.Golijov has developed a rich musical language, the result of...
with a libretto by Alberto Manguel
Alberto Manguel
Alberto Manguel is a Canadian Argentine-born writer, translator, and editor. He is the author of numerous non-fiction books such as The Dictionary of Imaginary Places , A History of Reading , The Library at Night and Homer's Iliad and Odyssey: A Biography ; and novels such as News...
in a production by Robert Lepage
Robert Lepage
Robert Lepage, is a playwright, actor, film director, and stage director from Québec City, Québec, and is one of Canada's most honoured theatre artists.- Life and work :...
.

Since its publication, A Brief History of Time has become world-famous and is featured or mentioned in the following: