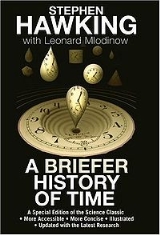 Encyclopedia
A Briefer History of Time is a popular-science
Popular science
Popular science, sometimes called literature of science, is interpretation of science intended for a general audience. While science journalism focuses on recent scientific developments, popular science is broad-ranging, often written by scientists as well as journalists, and is presented in many...
book
Book
A book is a set or collection of written, printed, illustrated, or blank sheets, made of hot lava, paper, parchment, or other materials, usually fastened together to hinge at one side. A single sheet within a book is called a leaf or leaflet, and each side of a leaf is called a page...
published in 2005 from the English
England
England is a country that is part of the United Kingdom. It shares land borders with Scotland to the north and Wales to the west; the Irish Sea is to the north west, the Celtic Sea to the south west, with the North Sea to the east and the English Channel to the south separating it from continental...
physicist
Physicist
A physicist is a scientist who studies or practices physics. Physicists study a wide range of physical phenomena in many branches of physics spanning all length scales: from sub-atomic particles of which all ordinary matter is made to the behavior of the material Universe as a whole...
Stephen Hawking
Stephen Hawking
Stephen William Hawking, CH, CBE, FRS, FRSA is an English theoretical physicist and cosmologist, whose scientific books and public appearances have made him an academic celebrity...
and the American
United States
The United States of America is a federal constitutional republic comprising fifty states and a federal district...
physicist Leonard Mlodinow
Leonard Mlodinow
Leonard Mlodinow is a physicist and author.Mlodinow was born in Chicago, Illinois, of parents who were both Holocaust survivors. His father, who spent more than a year in the Buchenwald concentration camp, had been a leader in the Jewish resistance under Nazi rule in his hometown of Częstochowa,...
. It is an update and rewrite of Hawking's 1988 A Brief History of Time
A Brief History of Time
A Brief History of Time is a popular science book written by renown physicist Stephen Hawking and first published by the Bantam Dell Publishing Group in 1988. It became a best-seller and has sold more than 10 million copies...
. In this book Hawking and Mlodinow present quantum mechanics
Quantum mechanics
Quantum mechanics, also known as quantum physics or quantum theory, is a branch of physics providing a mathematical description of much of the dual particle-like and wave-like behavior and interactions of energy and matter. It departs from classical mechanics primarily at the atomic and subatomic...
, string theory
String theory
String theory is an active research framework in particle physics that attempts to reconcile quantum mechanics and general relativity. It is a contender for a theory of everything , a manner of describing the known fundamental forces and matter in a mathematically complete system...
, the big bang theory
Big Bang
The Big Bang theory is the prevailing cosmological model that explains the early development of the Universe. According to the Big Bang theory, the Universe was once in an extremely hot and dense state which expanded rapidly. This rapid expansion caused the young Universe to cool and resulted in...
, and other topics in a more accessible fashion to the general public. The book is updated with newly discovered topics, and informs of recurring subjects throughout the book in greater detail.