Encyclopedia
951 Gaspra is an S-type
S-type asteroid
S-type asteroids are of a stony composition, hence the name. Approximately 17% of asteroids are of this type, making it the second most common after the C-type.-Characteristics:...
asteroid
Asteroid
Asteroids are a class of small Solar System bodies in orbit around the Sun. They have also been called planetoids, especially the larger ones...
that orbits very close to the inner edge of the asteroid belt
Asteroid belt
The asteroid belt is the region of the Solar System located roughly between the orbits of the planets Mars and Jupiter. It is occupied by numerous irregularly shaped bodies called asteroids or minor planets...
. Gaspra was the first asteroid ever to be closely approached when it was visited by the Galileo
Galileo spacecraft
Galileo was an unmanned spacecraft sent by NASA to study the planet Jupiter and its moons. Named after the astronomer and Renaissance pioneer Galileo Galilei, it was launched on October 18, 1989 by the Space Shuttle Atlantis on the STS-34 mission...
spacecraft, which flew by on its way to Jupiter
Jupiter
Jupiter is the fifth planet from the Sun and the largest planet within the Solar System. It is a gas giant with mass one-thousandth that of the Sun but is two and a half times the mass of all the other planets in our Solar System combined. Jupiter is classified as a gas giant along with Saturn,...
on 29 October 1991. 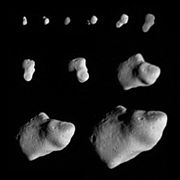 Apart from a multitude of small craters, Gaspra has half a dozen large flat areas and concavities. One of these flat areas, (Dunne Regio), is a 5×7 km area which is flat to within 200 m. It is uncertain whether these are the result of impacts or whether they are instead facets formed when Gaspra broke off its parent asteroid. In the weak, lopsided gravity of Gaspra, impact crater
Impact crater
In the broadest sense, the term impact crater can be applied to any depression, natural or manmade, resulting from the high velocity impact of a projectile with a larger body...
s would naturally take on such flat, lopsided shapes, making this determination difficult. The flat facets and concavities give Gaspra a very angular appearance.

Gaspra appears to be fairly olivine
Olivine
The mineral olivine is a magnesium iron silicate with the formula 2SiO4. It is a common mineral in the Earth's subsurface but weathers quickly on the surface....
-rich among the S-type asteroid
S-type asteroid
S-type asteroids are of a stony composition, hence the name. Approximately 17% of asteroids are of this type, making it the second most common after the C-type.-Characteristics:...
s (the surface appears to contain olivine and pyroxene
Pyroxene
The pyroxenes are a group of important rock-forming inosilicate minerals found in many igneous and metamorphic rocks. They share a common structure consisting of single chains of silica tetrahedra and they crystallize in the monoclinic and orthorhombic systems...
in the proportions 4:1 to 7:1). There are no prominent albedo or color patterns, although a subtle color variation is seen across the surface (see image above).

Gaspra's surface lacks unambiguous craters of a size comparable to its radius, like those seen for example on 253 Mathilde
253 Mathilde
253 Mathilde is a main-belt asteroid about 50 km in diameter that was discovered by Johann Palisa in 1885. It has a relatively elliptical orbit that requires more than four years to circle the Sun. This asteroid has an unusually slow rate of rotation, requiring 17.4 days to complete a...
. A probable reason is that the collision that produced the Flora family
Flora family
The Flora family of asteroids is a large grouping of S-type asteroids in the inner main belt, whose origin and properties are relatively poorly understood at present...
and Gaspra was relatively recent on an astronomical timescale, so that Gaspra has not yet had the opportunity to acquire many large craters since. Analysis of cratering rates suggests the age of the surface is between about 20 to 300 million years.

Grooves about 100–300 m wide, up to 2.5 km long, and tens of meters deep are seen on Gaspra's surface, which may be related to Gaspra's formation along with the rest of the Flora family in an asteroid collision. Their presence also suggest that it is a single coherent body, rather than a rubble pile. The grooves were likely created by impacts that shattered the underlying rock. A system of much more prominent grooves is seen on the Martian moon Phobos
Phobos (moon)
Phobos is the larger and closer of the two natural satellites of Mars. Both moons were discovered in 1877. With a mean radius of , Phobos is 7.24 times as massive as Deimos...
. The pitted appearance of some grooves may suggest that the surface is covered by a regolith
Regolith
Regolith is a layer of loose, heterogeneous material covering solid rock. It includes dust, soil, broken rock, and other related materials and is present on Earth, the Moon, some asteroids, and other terrestrial planets and moons.-Etymology:...
.

The extensiveness of regolith on Gaspra and its presence overall is a matter of debate, and not fully understood. Visually, the somewhat subdued and mantled appearance suggests a substantial regolith. Also, correlations are seen between the subtle color variations and local topography, and it has been suggested that this is caused by the slow migration of regolith to lower areas. It is, however, difficult to explain the origin of a putative regolith. Firstly, Gaspra's escape velocity
Escape velocity
In physics, escape velocity is the speed at which the kinetic energy plus the gravitational potential energy of an object is zero gravitational potential energy is negative since gravity is an attractive force and the potential is defined to be zero at infinity...
is very small, so small that it is difficult to understand how it could keep a significant portion of fragments ejected by impacts from escaping. This may be alleviated if Gaspra is a porous body or started with a large regolith, but one has to explain how the original regolith appeared. A possible resolution of the issue may be that Gaspra obtained a regolith during the Flora-family forming impact that also created Gaspra itself. Secondly, it has been estimated that the matter ejected by all the craters would be only enough to cover Gaspra with 10 m of regolith. However, some craters are much deeper than this without showing any structural difference on their walls.

The Galileo flyby was too distant for a body of Gaspra's small size to noticeably affect Galileo's trajectory, so no information on Gaspra's mass was obtained. (Galileo also visited 243 Ida
243 Ida
243 Ida is an asteroid in the Koronis family of the asteroid belt. It was discovered on 29 September 1884 by Johann Palisa and named after a nymph from Greek mythology. Later telescopic observations categorized Ida as an S-type asteroid, the most numerous type in the inner asteroid belt. On 28...
where it discovered a moon, allowing a mass estimate there.)

Gaspra's surface area has been calculated at about 525 km², which, for comparison, is about half the land area of Hong Kong.

Gaspra was discovered by Russian astronomer G. N. Neujmin in 1916. Neujmin named it after Gaspra
Gaspra
Gaspra is a spa town in Crimea, Ukraine. It is located on the Black Sea coast, west of Yalta, and is a popular holiday resort. Leo Tolstoy lived in Gaspra in 1901 and 1902.The asteroid 951 Gaspra is named after Gaspra.-Places to see:...
, a Black Sea
Black Sea
The Black Sea is bounded by Europe, Anatolia and the Caucasus and is ultimately connected to the Atlantic Ocean via the Mediterranean and the Aegean seas and various straits. The Bosphorus strait connects it to the Sea of Marmara, and the strait of the Dardanelles connects that sea to the Aegean...
retreat that was visited by his contemporaries, such as Gorky
Maxim Gorky
Alexei Maximovich Peshkov , primarily known as Maxim Gorky , was a Russian and Soviet author, a founder of the Socialist Realism literary method and a political activist.-Early years:...
and Tolstoy
Leo Tolstoy
Lev Nikolayevich Tolstoy was a Russian writer who primarily wrote novels and short stories. Later in life, he also wrote plays and essays. His two most famous works, the novels War and Peace and Anna Karenina, are acknowledged as two of the greatest novels of all time and a pinnacle of realist...
.

Galileo flew by Gaspra on 29 October 1991, passing within 1,600 kilometers at a relative speed of about 8 kilometers per second (18,000 mph). 57 images were returned to Earth, the closest taken from a distance of 5300 km. The best images have a resolution of about 54 meters/pixel. The area around the southern pole was not seen during the flyby, but the remaining 80% of the asteroid was imaged.

Because Gaspra's position was only known to within about 200 km before the encounter, and the camera's field of view was only about 5° across, Galileo would not know where to point to capture images of the asteroid once it was closer than 70,000 km. This would render the encounter not very interesting scientifically. To overcome this problem, a pioneering optical navigation campaign was implemented by the Galileo spacecraft team to reduce the uncertainty of Gaspra's position using images captured during the approach to Gaspra. This was spectacularly successful and allowed the spacecraft to obtain images from as close as 5300 km. At this closest range, the pointing was still not known quite accurately enough, but the camera actually took a 51 image mosaic so as to capture Gaspra on at least one image. Similar optical navigation techniques have been used on all spacecraft flybys of asteroids since.